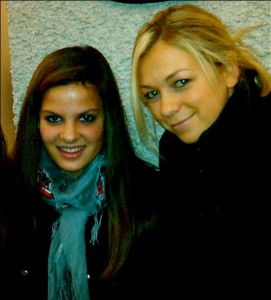 I set off on le Metro that first day, trying to navigate my way through Parisâ€™ pockets of immigrant communities to complete an assignment with my roommate, Ã‹glÃ«. I met Ã‹glÃ« earlier that morning. Her energy was magnetic.

Fortified by my recall of the French language, I acted as extemporaneous interpreter and group leader while exploring the impoverished neighborhoods bordering Paris, les banlieues. Perusing the open-air marketsâ€”fragrant with spices and vivid with displays of hand-woven textilesâ€”and mosques reaffirmed for me the virtue of a multicultural world.

Fatigued by the dayâ€™s travels, Ã‹glÃ« and I stopped in a quaint cafÃ© to eat. Just as our first course arrived, her mother called, giving me the opportunity to hear Ã‹glÃ« speak Lithuanian and English simultaneously. Noticing how impressed I seemed, Ã‹glÃ« laughed and quickly downplayed it, saying, â€œIf only youâ€™d met me when I first arrived in the States.â€

Forced to move from her birthplaceâ€”Lithuaniaâ€”to Chicago after the death of her father, Ã‹glÃ«, then fifteen, was thrust into a new life and language. Her command of English consisted of only the little she knew from American movies.

In between bites of food, she admitted to remaining silent in class for her first several months in the U.S. in fear of embarrassing herself. She separated herself from her classmates. With teachers constantly mispronouncing her name as eagle or egg-lee, she resented her Lithuanian identity.

When I asked if sheâ€™d been back to Lithuania, she paused. When she returned after being in the U.S. for five years, she was no longer Ã‹glÃ«, she said. To her Lithuanian relatives and friends, she was Ã‹glÃ« – the American. Yet she also remained an outsider in the eyes of her peers in Chicago. She had found herself an outsider in two worlds; â€œhome,â€ for Ã‹glÃ« seemed nowhere.

I realized then that cultural identity is neither static nor concrete. We are a collection of our experiences. It is not as simple as knowing who you are. It goes where you go, but itâ€™s negotiated with others who receive you when you get there. To me, that morning, Ã‹glÃ« was Eastern European. But as we returned to our hostel and looked at her family photos, she became someone whose roots lay in Lithuania but whose spirit transcended the confines of geographically based identity.