In truth, immigrants are pulled threads, drawn from motherland fabric and sewn onto the material life of our new homelands. We exist in a state of cultural purgatory, a state of not belonging. Or maybe we’re split, belonging a little to both places. While we are woven into the whole, we yet stand out. We are bold lines of yarn stitched into the fabric of our adopted culture, in hopes of maybe belonging again one day. – Ayad Alkadhi 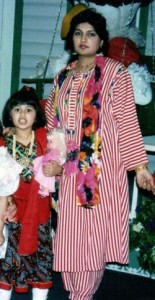 â€œThen what do you want to do with your life?â€ my mother scolded me one summer afternoon as we were discussing my future career plans, that, despite her persistent advice, did not include medical school. I had argued with her that it was difficult to discuss these things with someone who had never even finished college, let alone embarked on a professional career. In return, and rightfully so, IÂ  received an earful about her lack of opportunities.

My mother was only 14 years old when her father, the familyâ€™s sole breadwinner, passed away in India. From then on, her lifeâ€™s objective had become two things: getting to America and subsequently making money, or as she explained it, â€œliving the ultimate life.â€ The majority of her family had already immigrated for a mere opportunity to become â€œAmerican,â€ while willfully accepting all the hardships that came with it.

She took her college entrance exams even before finishing high school in order to apply for a Canadian visa, in hopes of eventually getting to America. When she was 16, she came to Canada, took a few courses at a local community college, worked odd jobs, but as her eighteenth birthday approached with no hint of getting into the United States or becoming a Canadian citizen, she started to become hopeless.

At 18 they would deport her, she feared, and with only a month left, she was ill-advised by a priest to sneak into America illegally on the assurance that his prayers would get her in. She left Canada peacefully, crossing the â€œNo Manâ€™s Landâ€ bridge to America, and as expected, was denied entrance. They crossed the bridge back to Canada, but were denied entrance again. For all intents andÂ  purposes, my mother belonged to neither Canada nor America nor even her homeland. She belonged nowhere.

She would eventually get to America and start her life again, one that did not include finishing college or starting a career but multiple jobs, part-time ESL classes, marriage and then me. As she continued scolding me on the importance of a sound education, one that no label could ever take away from you, I realized the easiest way to explain my career choice to her.

What she wanted so badly was what I wanted as well; to be an American. Though I spoke perfect English and had a valid American passport, I could never truly be â€œAmericanâ€ in the eyes of my fellow Americans. Every time I met a stranger they would ask me, â€œBut where are you really from?â€ as if being an American wasnâ€™t enough for them. Ironically, the same question would be asked when I returned to the â€œhomelandâ€ India. 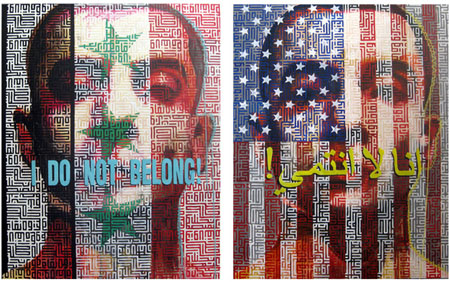 I explained my feeling of being stuck in terra nullius, or Latin for â€œno manâ€™s land,â€ to my mother. Neither homeland resonated with me or accepted me fully. As a famous Iraqi artist, Ayad Alkadhi, had put it, I was held by a thread, a bold line of yarn stitched into the fabric of my adopted culture, in hopes of maybe belonging again one day.

What I wanted to do with my life, I rationalized to my mother, was capture the stories of those bold lines that went unnoticed. Those that were woven into the whole yet stood out and demanded to be felt, to be accepted. Those bold lines like her and me.