There’s always an airplane I can return on 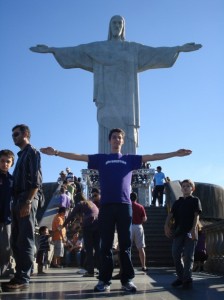 The mere thought of anything that draws me back home makes my eyes tear up. Iâ€™m not that patriotic. Itâ€™s rather a visceral response, a reflex, to an absence of belonging. Simply put, homesickness.

For the past three years, I havenâ€™t necessarily counted my life in 365-day cycles. Iâ€™ve been living from one flight to another, counting the days down to my next departure and the experiences it will bring me.

Every September has been the same. Itâ€™s suddenly the end of summer and the time to leave my family to go to back to school abroad. My own definition of home has actually changed so many times already that I have lost track of it.

Likewise, where home is remains unclear.

When college applications came around about a year and a half ago, I decided I wanted to continue my studies abroad. I was living in a boarding school in Costa Rica at that time and chose to apply to universities in other countries so I could further that experience.

Little did I know that my decision would impact so heavily on my family.

As we drive to the airport every year, the same conversations come up. With tearful eyes, my mom tries for one last time to talk me out of it. â€œWhy donâ€™t you just stay here and study hard so youâ€™ll pass the entrance exams [for the University of Brasilia] and get a job?â€

As I sit back on the passenger seat and see Brasilia pass before my eyes, Iâ€™m usually at a loss for words. The easiest way to avoid any feelings about leaving my friends and family behind is being rational about my decisions.

I didnâ€™t leave Brasilia because of political instability or issues of national security.

I came to the United States to get a better education and access to resources most universities back home probably wouldnâ€™t be able to provide me.

Yet, the very first day of international orientation, I realized I had set myself up for a life of contrasts. I was surrounded by undeniable wealth and immersed in a privileged reality I donâ€™t quite belong to.

I donâ€™t think most of my friends ever notice it, but Iâ€™m constantly thinking about it: money and culture set us apart, at least in our upbringing.

When my friends start talking during dinner about politics or some TV shows and artists I have never heard of, I just keep my mouth shut and literally nod and smile. But, as I put on this faÃ§ade, which they donâ€™t often seem to notice, so may things rush through my head.

Most importantly, while I hear them talk about their country and culture confidently â€” as I also would in Brazil â€” I wonder what it would actually be like to resettle permanently in another country.

After all, as painful as my memories are, they are also comforting. Thereâ€™s always an airplane I can return on, and so far, thatâ€™s what Iâ€™ve done.