A Second Take: Indian filmmakers return to the homeland to find inspiration 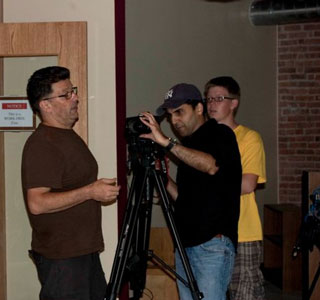 Sharma's short film "A Portrait in Bombay" features the stories of a Rickshaw driver in India. Working in India gives in him a chance to tackle contemporary issues, he says.

When filmmaker Sandeep Sharma thinks of India, he thinks of a buffalo in Bombay. He remembers following his aunt through a maze of alleys one morning during a trip to India, until he reached a shed. Inside, a buffalo nudged two stones of raw wheat in a circle and crushed them until the smell of buffalo milk wafted through the room.

The memory is a small one, but itâ€™s a visceral one too. It brings Sharma back to a different era in India, one he is reminded of when he sees manufactured rows of milk bottles in the aisles of a grocery store, which contrast sharply with the buffalo milk he is accustomed to. Sharma tries to capture human moments like these on film.

Sharma is an Indian filmmaker living in Chicago. He has produced a series of short films and is currently working on a feature with his company Alituf. Sharmaâ€™s short film Â â€œWild Thingsâ€ was featured in the first annual Chicago South Asian Film Festival (CSAFF), held in October. He recently returned to India to shoot â€œA Portrait in Bombay.â€

â€œFilm is a universal language,â€ Sharma says. â€œBeing able to jump through time, and go into places that you donâ€™t usually, I donâ€™t think other art forms have that depth.â€

Born in West Virginia, Sharma is a first-generation American. His parents lived in Punjab and Rajasthan. Growing up, Sharma thought he would become a doctor or lawyer, but he changed direction and moved to New York to work in film.

Sharmaâ€™s films have taken him to numerous locations to work with producers and directors like Mira Nair. He is currently an adjunct professor at Columbia College Chicago. Traveling to his parentsâ€™ home country to film has influenced his process dramatically.

â€œIt broadens you as a human being, particularly as a filmmaker,â€ he says. â€œMy senses are overloaded and I am trying to capture and process. Some things I just file away in my mind to come back and shoot.â€

Along with broadening his perspective, returning to the homeland might also give filmmakers like Sharma a chance to feature untraditional themes in Indian film, according to Amit Rama, festival director of CSAFF.

â€œThe key to South Asian filmmakers is that a lot of them are emerging out of this shadow of Bollywood,â€ Rama says. â€œTheir perspectives are important and they need to be heard.â€

Artistic license is a crucial component to these stories, according to Rama. CSAFF did not place any guidelines on the content of films. Instead, filmmakers were encouraged to tell meaningful stories, even if the films portrayed the homeland in a negative light.

â€œThe stories that they tell are ones that they should feel they connect with. At the end of the day, itâ€™s about showing the truth on the screen,â€ says Rama.

The changing themes in Indian film might be a reflection of the changing landscapes filmmakers like Sharma observe upon going home.

â€œItâ€™s sort of stepping back into time in a lot of respects. I have memories as a child of some of those places, the landscapes, the people, and the entire place changing 180 degrees,â€ Sharma says.

For Sharma, the differences between the Bombay of his childhood and the Bombay of his films are drastic. He was reminded of the changes when he saw the grocery stores, which replaced the carts of tomatoes, and apples that lined the streets when he was younger.

Straying from Bollywood gives Sharma a chance to explore these stories, ones that are not necessarily sensational, but important, nonetheless.

â€œQuite a lot of [Bollywood] cinema is dealing with very glamorously popping you out of your reality, but now Iâ€™m dealing with current issues,â€ he says.

The latest issue Sharma is dissecting revolves around a young Indian woman who leaves her village and falls in love. The story defies tradition and expectation, and according to Sharma, it is the type of story that needs to be told through film.

â€œFilm can bring forth and start a dialogue with the global community,â€ he says. â€œ[Film] can begin an educational and sort-of inspirational platform for those people that engage or watch it.â€

The word â€œchildhoodâ€ reminds filmmaker Umakanth Thumrugoti of pressure and stress. It brings him back to a conversation he had with his nephew during a visit to India several years ago. The boy, who was in eighth grade at the time, was preparing for an exam that was five years away.

He told Thumrugoti about his daily routine: wake up at 4 a.m., eat breakfast, go to school, do homework, study, sleep and repeat.

The schedule sounds alarming, especially for a little kid, but, according to Thumrugoti, it isnâ€™t unusual.

â€œThis is a very common theme. Itâ€™s very common for parents to stay up all night while their kids are studying,â€ he says. â€œItâ€™s a dominant Indian story.â€ 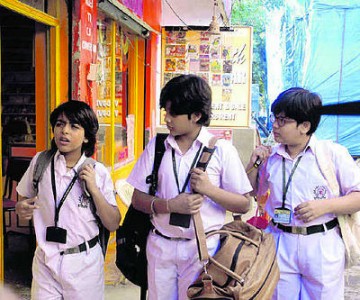 Thumrugoti is a writer and filmmaker who worked for Disney for 15 years. He returned to India to film 7 Days in Slow Motion, a feature presented at CSAFF, which tells a story, experienced by Thumrugotiâ€™s nephew, Thumrugotiâ€™s audience and, in a way, Thumrugoti himself.

Growing up, Thumrugotiâ€™s parents encouraged him to be first in his class. He moved to the U.S. to study technical engineering at Texas A&M, but his career plan changed one night while making coffee at the library.

He remembers doodling in his sketchpad as he waited for the pot. Another man stood next to him and began drawing too.

The man looked at his sketches and suggested Thumrugoti apply to the design program. He purchased a sketchbook from the grocery store, created a portfolio and was accepted to the program, even though it strayed from his parentsâ€™ plan.

â€œ7 Days in Slow Motionâ€ is not autobiographical, but it captures themes in Thumrugotiâ€™s life. It follows Ravi, a middle class Indian child who breaks free from the â€œ60% education and 2.9% funâ€ pie chart his mother created for his life.

â€œThere are parts of me in the story, but that theme is basically every middle class metro kid in India,â€ Thumrugoti says.

Returning home to India to film seemed to be the best way to start a dialogue about these issues, according to Thumrugoti.

â€œMy best experiences in India were when I watched movies with my parents,â€ he says. â€œYou donâ€™t want to preach life lessons to kids, but I did learn watching movies.â€

Creating â€œfamily friendlyâ€ movies is important to Thumrugoti, especially because the genre seems to be nonexistent in India.

â€œIn India and South Asia, there are very few films made for kids,â€ says Rama. â€œThere arenâ€™t a lot of films that both parents and kids can watch.â€

Returning home to shoot the film allowed Thumrugoti to bring a new genre to Indian households, but it also presented some logistical challenges.

The film was shot in a week, which proved to be grueling for the Indian crew which was used to a longer production time. Indian actors often work fulltime jobs outside of acting; so memorizing lines was an issue on set.

â€œThe least I expect from actors is to know their dialogues,â€ he says. â€œThey would come on the set and basically try to improvise.â€

Despite these challenges, filming in India was a restorative experience for Thumrugoti. He noticed a sense of â€œsocial supportâ€ amongst the crew. He was moved by the way the chef kept tabs on his daily consumption to make sure he was eating enough.

This support makes Thumrugoti optimistic about the future of the country. The pressure faced by children and the extreme levels of poverty frustrate him, but he is hopeful.

After landing in India to begin filming, he remembers seeing a homeless man outside the airport. The man handed a slip of paper to a stranger in a business suit. Without hesitating, the stranger dialed a phone number into his phone and offered it to the homeless to use.

â€œThey belong to completely different social and economic classes but the contact, and the connection, and the kind of social support that existed within them for that to happen, that made me feel good,â€ he remembers.

Stories like this one inspire Thumrugotiâ€™s films. While he might not be able to solve the issues he encounters, he can use film to address them in an approachable way.

â€œYou meet those kinds of characters all the time in India,â€ he says. â€œTo tell a story about them so that somebody whoâ€™s seeing the movie can understand that is a big luxury for me.â€