Russian youth and the thought of returning home

As Reference Librarian at the Skokie Public Library, part of Katrina Belogorskyâ€™s job is to provide resources for new immigrants. She helps to update a website called Skokie Net, an interactive and community-oriented blog that provides information and resources for the Chicago suburb. Nestled among information about an upcoming fall festival and a town residentâ€™s reflections on his 101st birthday, Belogorsky finds what she is looking for â€“ the New Immigrant Information Center. It stands out on the page — highlighted in purple, under the section heading, â€œcommunities.â€

Skokie, known for its cornucopia of multicultural residents, works to cater to â€œnew Americansâ€ in the best ways possible. Countless resources are available online and in person, all aiding new residents in their assimilation process. While Belogorsky may not need to use these resources herself any more, one thought is never far from her mind as she places orders for ESL books for the libraryâ€™s world languages section.

â€œI am a Russian immigrant, but this is my home now. I live here, I work here, and my friends and family are here,â€ she says with a smile, almost as if returning to Russia is something that rarely crosses her mind. â€œI donâ€™t really have anyâ€¦explanation but I feel comfortable here; more comfortable than going over there even though Russia is where people speak my native language. Â If something happened that I needed to go back and live there, I could adjust. But it takes time. For now, this is my home.â€

Russian and Slavic immigrants have been arriving in the United States for decades, especially toward the end of the Soviet era, usually seeking asylum from religious or political persecution. Â Once the Soviet Union fell, others craved opportunities or looked to be reunited with family. With strong immigrant communities already established across the United States, many found it easier to connect with a web of support, making assimilation into society easier. Belogorsky, who has been in the United States for sixteen years, is not unique among the Russian immigrant population in that she identifies the United States as her true home. Many immigrants maintain connections to their roots, though returning home only to visit or sometimes not at all. 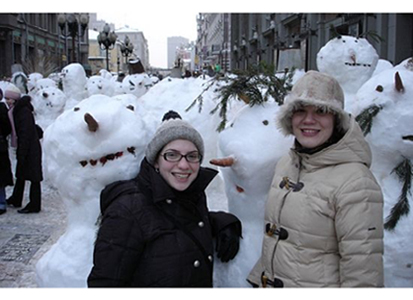 Jane Charney (left) and her best friend from growing up, Vika Shamkut, at a pedestrian mall in Moscow in January 2006. Charney, who immigrated to the United States, currently lives in Chicago and has only been back to Moscow once.

Jane Charney, who immigrated from Moscow when she was 14 years old, helped to co-found the Russian Jewish Leadership Forum, a group of Russian-speaking, young professional Jewish immigrants in metropolitan Chicago. Groups such as these help immigrants maintain connections to their homeland while finding success in the United States, according to Charney.

â€œThere is a kernel of Russianness in everyone and we donâ€™t want it to go away, but we also wanted to connect to the American community because we are Americans,â€ Charney says. Â â€œSome of us came here when we were very young â€“ their perception of the world is from an American point of view even if their sensibilities are somewhat Russian.â€

She also agrees that many immigrants do not feel the need to return to their home country because of the comforts they are afforded in the United States.

â€œMoscow is the most expensive city the world, but there are still places where the hot water is turned off for the summer,â€ Charney says. â€œYou have to boil water in a little kettle to take a shower. People get used to the luxuries of modern life. If you are originally from some little town in the middle of Siberia, you definitely donâ€™t want to go back there because, if it is a struggle in Moscow, what is it going to be like somewhere else.â€

The Story of Youth

Still, maintaining cultural identity remains important. Max Elkin speaks in nearly perfectly English and although he found certain details about the United States to be shocking, he credits his move at a young age as the reason he assimilated so smoothly.

Elkin, now 23, says he was most struck by two things upon his arrival in the United States; nature and â€œfat people,â€ as he says with a chuckle.

â€œOne thing that struck me on the first day was the trees. It isâ€¦so full of life,â€ he says. â€œIn general though, I noticed that people act quite differently. They donâ€™t dress really, they just put clothes on. In Europe everybody dresses to look their best, but here people are okay with just jeans, shirts and gym shoes. Itâ€™s just the drastic difference. â€œ

There was culture shock, but nothing that kept Elkin from relating to Americaâ€™s youth culture. Though he returned to Russia for a few weeks about two years after immigrating, he found little reason to return. Yet, with the current economic situation, he, like other Russian youth, has considered returning to work in Russia.

â€œConsidering that American colleges are very valued, it is not difficult for an American to find a job across the world,â€ Elkin reasons.

If he did so, Elkin believes that his family and friends would accept his decision. Even his mother, though he concedes she â€œwouldnâ€™t be so happyâ€ about it.

Charney has also found young Russian immigrants who are thinking much the same thing. Yet sheâ€™s also noticed that many who return to Russia to work tend to return to the United States after a few years.

â€œAs fun as it might be to live in Moscow, you also have sensibilities that are infused by your American education,â€ Charney says. â€œWhen people move back, they usually keep an American job abroad. Their world revolves around the American community and people soon realize that they might not want to stay much longer.â€

Those who immigrated as youth, even if they may be older now, also feel more connected to the United States. Alexandra, an immigrant whose name has been changed to protect her privacy, arrived from Belarus in 1992, when she was ten years old. Having spent all of her young adult life in the United States, she considers this country her home. Yet, Alexandra has not rejected her heritage and often will speak Russian at home with her family – â€œreturning homeâ€ through her every day actions of keeping cultural alive.

â€œI speak Russian to my daughter because itâ€™s good to know as many languages as you can know and I want her to be able to understand my husband and me, our parents, our grandparents,â€ she adds. â€œI donâ€™t mean understand just linguistically, but rather culturally. I donâ€™t think anyone can understand the Russian culture without knowing the language.â€ 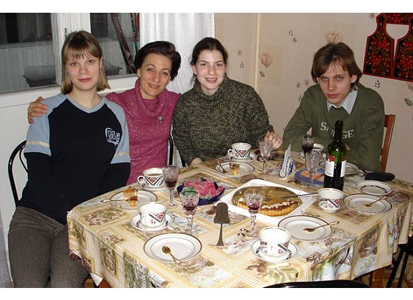 Charney (second from right) is pictured visiting her Russian language and literature teacher and her son at their home in Moscow in January 2006. Like many Russian immigrants who make trips home, seeing family and friends are the most comforting parts of the journey.

Because they are able to remain connected while in the United States, many immigrants feel less of a need to travel back to Russia. The trip, for most, serves simply as a vacation.

â€œThe first time I went back, it was emotionally difficult. I wanted to go back very badly, but I canâ€™t even explain why I didnâ€™t go in those years,â€ Belogorsky says. â€œEventually I went just to see family and friends, but the two week trip was long enough.â€

For Charney, who has returned to Russia once, going to Moscow is something she has not made a priority.

â€œI have a connection to the city, but there are a lot of other places that Iâ€™d like to see in the world before. But it does have a lot of sentimental value. Itâ€™s my hometown. Itâ€™s where I lived and became a person,â€ she says.

And for Alexandra, a return trip is not something she thinks about much.

â€œI plan on returning when my child is old enough to appreciate where their family came from,â€ she says with some resistance.Â â€œI hope not to have to stay for more than a week.â€

The Question that Remains

For many Russian immigrants, defining identity remains a tricky issue. Many settle in areas where there is an established Russian community so maintaining culture is not nearly as difficult as it could be.

According to Charney, immigrants from previous generations are more likely to define the places they are from in Russia as their homes.

â€œA lot of my friends came here when they were very young so they donâ€™t remember much. When you return, it is like putting a human face on the city that they have heard through stories or seen photos of,â€ Charney says. â€œFor the older generationâ€¦they probably have a different experience. â€œ

At the same time, some individuals never truly adjust to the United States.

â€œI knew a girl who came here when she was 13 years old, went through school, went through college and had a professional job,â€ Belogorsky recalls. â€œAll of a sudden when she was 32 or 33, and sheâ€™s been traveling back and forth, she decided to go back.â€

Belogorsky also notices the impact that the community in the United States has on her children, and youth as a whole. For instance, many young people will speak Russian fluently with their family, and sometimes with their friends, but will not â€œreally have a great passion about Russia.â€

She says of her son: â€œI wish I knew the reason because there are also kids who came at the same age, who have only Russian friends. They have a huge desire for Russian slang, Russian literature, anything new.â€

The question about why some youth identify with their Russian culture and others donâ€™t is difficult to answer. For that, Belogorsky issues a challenge: â€œGo figure out why itâ€™s happening, I really donâ€™t know.â€