Following roots: Italian-Americans go back home to retrace their geneology

Four or five years ago, travelers didnâ€™t want to go to Sicily. Now itâ€™s one of the most popular destinations in Italy.

The phenomenon of the heritage trip, where second- and third-generation Italian-Americans trace their genealogy and then take trips to the homeland to see their relatives, has changed the travel industry in the past few years as more people are bypassing typical European tourist spots like Paris and Rome to go to off-the-map destinations like Sicily.

Joan Inzerilloâ€™s grandparents emigrated to the U.S. from Sicily in the early 20th century and since living with one set of them as a child, she has been interested in finding her roots.

â€œIâ€™ve always embraced the culture and the language,â€ Inzerillo says. â€œMy mother would always say to me, â€˜youâ€™re more Italian than I am.â€™â€

Inzerillo visited Sicily briefly in 2007. There, she visited her relatives, including her fatherâ€™s 93-year-old first cousin, Deanna. The relative was so overjoyed to see Inzerillo that she begged her to come back someday because Inzerillo was only able to see them for four hours. Inzerillo promised she would be back.

Deanna died only months before Inzerillo journeyed to Italy for the second time. This has only added to Inzerilloâ€™s desire to retrace her Italian ancestry.

Websites like Ancestry.com have helped Inzerillo embrace her heritage by helping her trace her genealogy with the clickâ€”or multiple clicksâ€”of a button.

On Ancestry.com, users have to know only a little bit of information to get started on their family tree. After entering what they already know into a family tree on the website, users can click on hints that provide them with information about their ancestors, dating as far back as the 1930 U.S. census.

Asking family members can also be an effective way to find out about the past. Inzerillo says she often uses her interest in genealogy as a conversation starter, especially when she is meeting new relatives. 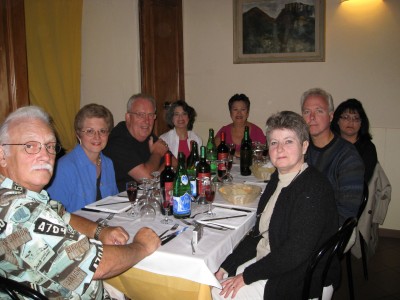 â€œI found that everybody I asked was willing to help,â€ Inzerillo says. â€œAs a result of that trip [to Italy], I have been in contact with so many of those relatives.â€

Many Italian-Americans use the web to keep in contact with relatives new and old. Inzerillo uses Facebook and Skype to talk to her relatives as often as every couple of weeks, she says.

Recently, Inzerillo was on Facebook when she saw someone with the name â€œVida Inzerillo.â€ She wrote to her, and soon found out that they were in fact related.

â€œItâ€™s amazing how small the world is with the Internet,â€ Inzerillo says.

Travel writer Maria Lisella says there is an increase in interest with going back to the homeland because interest in Italian culture itself has grown over the years.

â€œBecause things Italian have become so popular, thereâ€™s a certain pride in saying that you come from there and a certain desire to know more about your heritage,â€ Lisella says.

Sam Collura, Inzerilloâ€™s cousin and another Italian-American, slowly became more interested in his heritage because of his proximity to his grandparents. Colluraâ€™s grandparents emigrated to the U.S. from Italy in 1909. They lived upstairs when he was growing up, but he never asked them about their past.

â€œI just knew they were there,â€ Collura says. â€œI didnâ€™t really know where they were born until I was maybe 16 years old, and then I heard the name of the town.â€

Eventually he began asking his grandparents questions about the past. Now Collura tries to get in contact with as many relatives as possible in order to learn more about his family.

â€œIt gets into you,â€ Collura says. â€œYou start thinking, â€˜where did they come from?â€™â€
But sometimes interest isnâ€™t enough. After locating family, a trip to Italy to meet them is often in order.

Finding family in the flesh

The adventure of finding oneâ€™s family in Italy can begin with simply asking around. When Collura and Inzerillo traveled to Samâ€™s ancestorâ€™s hometown, Aragona, they had no records or addresses to guide them.

Inzerilloâ€™s plan of action was to ask a woman on the street where they could find the Colluras. The woman, not knowing any Colluras but recognizing it as a common name, told them to go to one of the restaurants in the town square and ask. They followed her instructions and soon were connected to someone who knew a Collura, a former mayor of Aragona in the 1970s. Â He led them to the mayorâ€™s son, Giuseppe Collura, who called his uncle Gaetano Collura, who invited Sam, Inzerillo, and their families to his villa in the country.

Though none of the Colluras could find Samâ€™s ancestors, Sam and Inzerillo will never forget the experience, laughing at memories of Gaetano falling asleep at the dinner table, or remembering how Gaetanoâ€™s older sister warmed up to them after her initial frosty distrust.
When Inzerillo visited her side of the family, she also found them to be warm and hospitable despite being complete strangers.

â€œThey were very embracing and were so happy to see us. They made us feel so welcome,â€ Inzerillo says. â€œThey couldnâ€™t get enough of us but we werenâ€™t there long enough to spend time with each of them.â€

Visiting family back home isnâ€™t necessarily easy. When Diane Kinn went to Sicily to visit her relatives, she had to keep her Italian dictionary out the entire time in order to understand them.

â€œI would talk in words, not sentences,â€ Kinn recalls. â€œAt the end of the day, you kind of get a headache because the words just arenâ€™t there.â€

The main difference that Inzerillo found between life in America and life in the homeland was the proximity of family.

â€œHere in this country families are divided, whereas there you can walk to different peopleâ€™s homes,â€ Inzerillo says. And then take the memories back home, either by taking some dirt from an ancestorâ€™s hometown in bags, by beginning, like Sam, to cook more Italian food, or by establishing a sister city connection between the hometown in Italy and the hometown in Illinois.

Thatâ€™s what Valeri DeCastris did.

DeCastris, on a trip to her ancestral hometown of Ferentino, about 40 miles southeast of Rome, met a cousin named Simone and they dreamed up a sister city partnership for the hometowns Ferentino and Rockford, Ill. The sister city relationship is responsible for exchanges between the towns, and Ferentino even affectionately refers to Rockford as a “colony”Â  and has a section devoted to Rockford on its website. The Greater Rockford Italian American Association (GRIAA) is sponsor to an annual Festa Italiana, which has been in existence for 35 years, with the proceeds going to scholarships for Italian-American students.

For Maria Svihla, visiting her family taught her much more than a tour ever could.

â€œThere are two kinds of grandparents– those who cry for the old country and those who didnâ€™t talk about it,â€ Svihla says. â€œMy grandparents never did.â€

Visiting her family helped immerse her in a culture that she never knew at home, from the tiny churches where they worshipped to the villaggios where they lived.

â€œWhen you tour, it’s like going in a big outdoor museum,â€ Svihla says. â€œBut when you go and you talk to people and you get this intimate history, you really get to know how they lived.”