As the planeâ€™s engines kicked into high gear, reality finally started to settle in for Bogdan Pukszta. He had been planning the move with his wife and two children for over two years, but he never knew exactly what it would mean until the wheels rose from the ground, separating him and his family from the Polish homeland.

It was 1982, and the communist regime in the Peopleâ€™s Republic of Poland made life for citizens like Pukszta and his family increasingly uncomfortable. A centralized economy afforded little opportunity, and tactics by the government to suppress political opposition, including martial law, intensified feelings of insecurity. Puksztaâ€™s family was fortunate to be able to follow relatives to Chicago. But none of that mattered as the plane took off.

â€œI really lost it at that moment, sitting on the plane,â€ Pukszta recalls. â€œI remember looking out the window, crying, thinking Iâ€™d never return. Just waves of emotionâ€”itâ€™s an incredibly hollow feeling, stopping to think of the people and things you have to leave behind.â€ 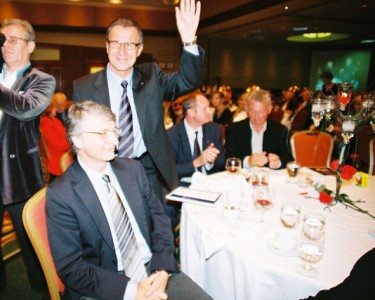 Pukszta and his family would get to return to the homeland, though, first in 1991 after the communist collapse in Poland, and on numerous occasions since. Since the nation began its journey to becoming a republican state in late 1989, it has made remarkable strides as a market economy as well. Now boasting one of the fastest-growing economies in the European Union, Poland has been one of the only nations to experience consistent growth in the past 10 economically turbulent years. As the demand for labor has increased, the unemployment rate in Poland has been cut in half since it floated well above 20 percent at the start of the decade, now down to 9.5 percent, according to European Commission figures. In addition, Polandâ€™s real GDP growth rate of more than 4 percent over the past 10 years is nearly double the EU average, according to the European Commission on Economic and Financial Affairs.

That swift economic development has made Poland a prime target for foreign investors and a location of growing potential for business owners, including Polish immigrants in Chicago, returning home to try to tap into a growing market.

â€œOver the past 10 years thereâ€™s been a noticeable increase in Poles looking to go back for business purposes,â€ says Joanna Michalec, vice consul at Chicagoâ€™s Consulate General of Poland.

One of those Poles is Ted Sojda, who fled the communist situation in 1978 with his family to settle in Chicago.

â€œIt was a suffocating regime,â€ Sojda recalls. â€œThe atmosphere was so bleak in Poland then. We really couldnâ€™t imagine staying any longer, not only because it was challenging economically but because it really brought down our spirits at times.â€

Today Sojda works as a realtor in Chicago with considerable holdings in the homeland. He first returned to Poland in the mid-1990s to visit family, but now he makes regular trips to buy and sell plots of land.

â€œThereâ€™s this new sense of confidence there,â€ says Sojda. â€œWith all the opportunity available, it feels good financially to deal over there and it also feels good to have that connection with where you came from.â€

Pukszta, who now serves as executive director of the Chicago Polish American Chamber of Commerce, works regularly with these entrepreneurs. He says the motivations for immigrants returning to Poland to start new business ventures have evolved over the years.

â€œEarly on with the new economy, people would go back more for sentimental reasons. Some were more willing to take on chances on risky, murky ventures, like pioneers, and a lot of them went broke that way,â€ Pukszta says. â€œNow people are returning with more sound opportunity, in addition to sentimental reasons. Markets for things we almost take for granted in the U.S.â€”packaging supplies, cleaning products, home appliancesâ€”these are the opportunities ripening in Poland.â€

Henry Kazmierczak, former head of Chicagoâ€™s Polish American Chamber of Commerce and a current investor in manufacturing sectors in Poland, has been sentimental about the homeland since moving to the States in 1982.

The Chamber hosts regular events to bring together Polish-American business people from around Chicago.

â€œEvery time I go back now I am just overjoyed,â€ Kazmierczak says. â€œThe way things are now, from the way they were, it is a complete turnaround. I never thought Iâ€™d be back, other than to maybe see family after I left. But now, there is concrete opportunity.â€

Still, even with the improving economy in Poland, itâ€™s far from a surefire investment for immigrants to make the trip back home.

â€œMost of the people who do go back only do so temporarily,â€ Michalec says. â€œAlmost always, they return to the United States for their permanent employment.â€

Sojda characterizes his Polish investments in much the same way.

â€œItâ€™s a successful enterprise overseas, but I couldnâ€™t rely only on that,â€ Sojda says. â€œItâ€™s just developed into a good complement to what I have here in Chicago.â€

Dual citizenship has increased steadily since 2004, according to the consulate, as many immigrants look to ease the process of going back and forth between Poland and America. Pukszta agrees with the consulateâ€™s observation, noting that the vast majority of Polish-American entrepreneurs starting businesses in the homeland retain permanent residence in the States. He says many businesses are extensions of ones in the U.S.

â€œThereâ€™s a reason Poles come here and stay here,â€ Pukszta says. â€œNo matter the opportunities back home, itâ€™s still not enough to make it worth it to stay in Poland. America still offers the most stability for business people by far.â€

In spite of the risks that come with investing in a young, raw economy, the idea of returning to the homeland and giving back is enticing to many immigrants. Monika Grudek, president of a background check service based in Hoffman Estates, Ill., hasnâ€™t exploited the boom in her homeland over the past decade, but says that the idea has been in the back of her mind for awhile.

â€œWhen you stop and think about all the types of services that have neglected to set up in Poland due to the economic climate, you realize that there are markets literally waiting to be tapped in Poland,â€ Grudek says. â€œAt the same time, nothing is guaranteed. Itâ€™s a fresh economy, and there is still a lot of work to be done there.â€

As for Pukszta, he would agree that nothing is guaranteed when it comes to Poland, his homeland that has undergone multiple drastic changesâ€”from communist stronghold to economic upstartâ€”since he was born there. Heâ€™s just glad to see Polish-Americans thriving around Chicago, and taking that success with them back to the homeland.

â€œItâ€™s a very gradual process, but itâ€™s been a remarkable transition over the years,â€ Pukszta says. â€œNow when I get off a plane in Poland, I look out and I can see hope.â€