Spirits are high for the entirety of this damp Saturday night in Chicago. Serbians of all ages exchange friendly kisses on the cheek and firm embraces. The unassuming brick house in Chicagoâ€™s Belmont neighborhood has been converted to the St. Sava Serbian Cultural Center. Tonight, itâ€™s converted once again. Steaming plates of Ä‡evapÄiÄ‡i, animated performances of classic theatre, and boisterous conversations in both Serbian and English compete for attention. These are the traits of the Homeland that distinguish this home from the rest on the block.

Many here have known each other for years. Everyone is getting old, one graying man comments. His friend chides him, suggesting â€œgo get a mirror!â€ Yet, while the Serbian community in Chicago has its fixed features and personalities, for others, Chicago represents a transitional period and a transitory home. The relationship between Serbia and Chicago is a tango of sorts, with each partner representing a fragmented notion of home. Making a transatlantic journey, due to violent conflict or economic prospects, has lasting implications on the notion of home.

The American dream is sometimes just a power-nap.

â€œI cried for three days,â€ recounts Nenad Zecevic. Zecevic, 26, has been in America for a year and a half. Those first 72 hours were excruciating.

Zecevic told his mother he would return home to Serbia. Food was not the same. Everything was overwhelming for this young Serbian who had come to St. Louis to obtain a degree in physical therapy.

After several days, Zecevic found a small Turkish grocery store nearby. The first bite into a loaf of bread was all Zecevic needed to transport him home. Similar ingredients and a distinctively sweet flavor link the Turkish and Serbian recipe. This was one step towards comfort.

As a teen, Zecevic would wake at 2, 3, or 4 a.m. to watch the Sacramento Kings NBA team, led by superstars PejaÂ StojakoviÄ‡ and Vlade Divac, both Serbians. Heâ€™d later doze off in class: the price to pay for his allegiance. However, baseball was a foreign concept. Zecevic had watched a few televised games before, but last year he attended a St. Louis Cardinals baseball game and the concept of America was brought to a head.

This December, Zecevic will return home for the first time. Last holiday season, he opted not to go back. This year, his mother mandates it. He knows that heâ€™ll be in the United States for a few more years; any opportunity to see his family is precious. Yet, Zecevic beams with pride for his newfound city. Finally able to entrench himself in the Serbian American culture of Chicago, Zecevic has found temporary residence living in St. Sava.

For others, redefining home comes in the form of cultural education and exchange.

â€œIâ€™ve Serbanized them,â€ declares Katarina Kosmina. After only six weeks at an American university, Kosmina, 18, has all of her American hall-mates kissing and embracing as they go to and from the confines of their dormitory.

Kosmina has transplanted these hallmarks of Serbian culture to her new American life. A few physical reminders of home also glimmer in her room – a necklace given to her by her grandmother and a small stuffed turtle.

â€œWhen I wear the necklace or when the turtle stares at me from the shelf, it’s the same as if I’m chatting on Skype with my brother or parents,â€ Kosmina says. â€œIt makes me feel closer to them and home.â€

The sensory stimulations of her home in Belgrade are still deeply entrenched in Kosminaâ€™s mind.

A proud family stands with Katarina during her graduation ceremonies in Mostar.

â€œThereâ€™s a mix of specific clothes – softener, mum’s perfume, hot bread – it’s just the consistency of everything that makes it feel like home,â€ says Kosmina.

Despite this intense allure, coming to America became what she calls â€œthe normal choice.â€ Empowered by international scholarships, an initially hesitant but supportive family, and a growing number of peers coming to America, Kosmina was steadily driven towards a decision to leave her home. But technology and trinkets enable Kosmina to keep her ties and her identity to her homeland.

For 21-year-old Luka Mirkovic, a back injury would change everything.

As one of Serbiaâ€™s rising young basketball stars, Mirkovic excelled on the Under 18 Serbian National team. Much like the pressure that is put on young athletes in America, the urgency to sign a professional contract at age 17 is hefty. Mirkovic was then sidelined with a back injury, physically minor but psychologically major.

â€œA career can end so quickly,â€ Mirkovic explains. He realized that his life would only be buttressed by hitting the books before hitting the court.

â€œI had heard that in the U.S. you can play basketball and get your education paid for you,â€ he says. â€œI said to myself, I should check it out.â€

Mirkovic turned down lucrative offers to play European basketball and instead chose to complete high school at a boarding school in LaPorte, Indiana. Almost immediately after touching down at Oâ€™Hare International Airport, Mirkovicâ€™s schedule filled with city tours and excursions. Mirkovic, towering at 6â€™11, was floored by the enormity and prominence of Chicagoâ€™s skyscrapers.

â€œAmerica is a bridge between my youth and my career,â€ says Mirkovic, who received a basketball scholarship at Northwestern University.

Even in Americaâ€™s heartland, playing Big 10 basketball has been a bridge between Mirkovic and the Serbian community. Now in his junior year, and playing center for Northwesternâ€™s Wildcats, his strong performance and leadership on his team always gain him attention and fans, Serbian and non-Serbian alike.

Yet, despite the opportunities afforded by American education, Mirkovic still identifies home as Serbia.

â€œI know Iâ€™m going to end up marrying a Serbian woman and living in Serbia,â€ Mirkovic says. â€œItâ€™s where all my family and friends are, and just a similar mentality and culture.â€ 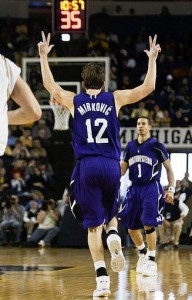 In fact, his I-20 student visa wonâ€™t last much longer. It expires two days after his anticipated graduation date.

â€œItâ€™s like theyâ€™re saying â€˜you graduatedâ€¦now get the hell out of here,â€™â€ he jests.

Home is fluid for some, firm for others. For the Serbian community of Chicago, recalibrating oneâ€™s concept of home is no easy feat, but is a task that countless Serbian immigrants have accomplished.