Bulgarians yearn for a transparent government 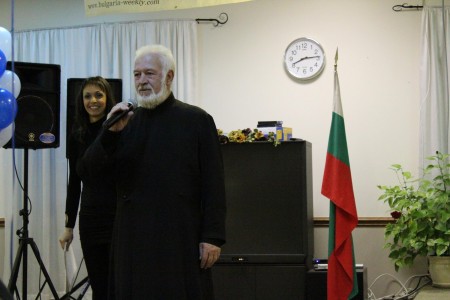 Over 5,000 miles away from home, Velemira Gecheva reserves the right to vote in Bulgariaâ€™s elections while residing outside of the country. After living five years in Chicago, she has yet to cast her vote.

There is a sense of frustration with Bulgariaâ€™s government and it spans across decades and continents. In 1989, the nearly 45-year reign of communism ended and gave way to a parliamentary democracy. Since then, the country has made great leaps but is still plagued with political corruption and economic turmoil.

â€œ[The people] really donâ€™t know who they want to be in power. They just go and vote for the reason to go and vote there,â€ says Gecheva. â€œThey really donâ€™t think who comes in power is going to make it any better for the country.â€

Bulgarians living in the U.S., who are over 18, have a valid ID, and are registered back home, have the right to vote absentee, even if they have become citizens of the U.S. During the last parliamentary elections in 2009, 1,200 voted in Chicago, according to Valentin Donchev, Consul General of Bulgaria in Chicago.

There are more than 100,000 Bulgarians residing in the Midwest.

Voter apathy amongst Bulgarians living abroad may stem in part from the sense of disappointment with Bulgariaâ€™s government. Bulgaria scored 3.6 on a scale of zero to 10 (zero being highly corrupt), according to the Transparency International 2010 Correction Perceptions Index, which measures levels of public sector corruption. Many Bulgarians say that due to the lack of transparency and of government, they do not see themselves ever returning to their home country.

In 2007, Bulgaria joined the European Union which opened up trade and travel. â€œ[Itâ€™s] the best thing that happened to Bulgaria,â€ says Vassil Bayraktarov, a business owner who left Bulgaria 10 years ago for more promising economic opportunities in the U.S.

Though the historic moment marked a turning point in Bulgariaâ€™s effort towards freedom, it also raised prices significantly without increasing jobs accordingly. While Gecheva says the government tried to help its people and lend money, â€œit didnâ€™t go to the right places. The biggest problem is the political corruption.â€ 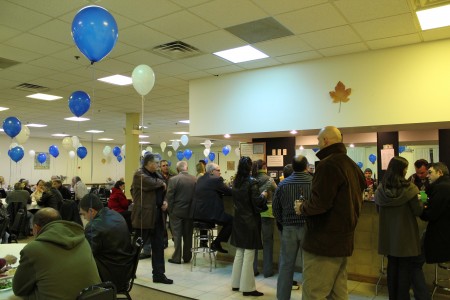 Guests gather at the Bulgarian Orthodox church Saint Sophia on Nov. 10 to celebrate the fall of the communist government 11 years ago in Bulgaria (Photo by Christina Walker).

Because of the political corruption that exists, itâ€™s all about connections. â€œFor anything you need to do, you need to know somebody,â€ says Marina Boneva, 34, who worked as a journalist in Bulgaria for a short time before coming to the U.S. in 2004. Her newspaper was forced to shut down at the end of the summer because of an investigation on building projects, focusing on ones with the most funding.Â  â€œJournalists in Bulgaria are just a tool of the government,â€ says Boneva.

Bonevaâ€™s parents, who still live in Varna, Bulgaria, submitted a complaint two years ago against their upstairs neighbor who was renovating his apartment. Their neighbor worked at the Regional Department of Construction Control supervising and approving reconstruction plans. One of the construction regulations in Bulgaria states that no bathroom or wet room may be built above someone elseâ€™s dry room, which the neighbor bypassed. An anonymous source later informed Bonevaâ€™s family that an attempt was made to fire her father due to the complaint. Her fatherâ€™s boss, however, refused to do so.

For Boneva, this annoyance is all too familiar. â€œThese are just labels that you put on things,â€ says Boneva. â€œIn communism or in democracy in Bulgaria, itâ€™s the same thing. There are rich people who control politics and the economy. And there are those who work for them, which is the rest of the country.â€

Because of connections, the judicial system in Bulgaria often overlooks perpetrators. While Bayraktarov believes the current government has made great strides and supports its efforts, he hopes the judicial system will adopt more Western values. â€œThat would give more belief in the Bulgarian people that no one is above the law,â€ says Bayraktarov. â€œPeople need to feel it and when they feel it, theyâ€™re empowered to act when they see justice.â€

Despite his confidence in recent efforts, Bayraktarov refrains from voting. â€œIâ€™m a part of this society,â€ says Bayraktarov. â€œWe have our own way here, and thereâ€™s no time for everything.â€

The false promises of a government hit even closer to home for Den Dinev, a politician in Bulgaria during the fall of communism and the wake of a new democracy. After a year of change, he left for the U.S.

â€œI saw how dirty it was there,â€ says Dinev. â€œThatâ€™s why I escaped.â€ 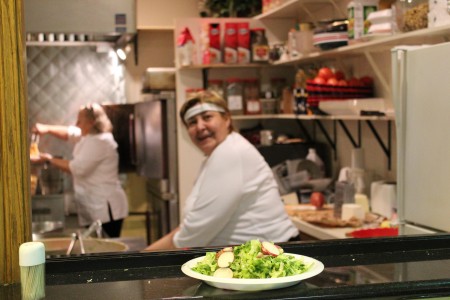 Busy in the kitchen, food is prepared for the Nov. 10 celebration marking the start of democratic change in Bulgaria (Photo by Christina Walker).

Despite the downfall of the communist party, many in power merely redefined themselves as socialists only to remain in the system. â€œThey are the same people,â€ says Dinev. â€œThey still keep everything there. Keep the mafia, keep the plants, keep the work, keep the money, everything.â€

Boyko Borisov , the current Prime Minister of Bulgaria who assumed office in 2009, was a former bodyguard to Todor Zhivkov, the First Secretary of the Communist Party who led Bulgaria from 1954 to 1989. Borisov is one of many politicians who were involved with the former communist rule.

â€œThereâ€™s a saying that every country has a mafia, every government has a mafia. Bulgarian mafia has its own government,â€ says Dinev. While he doesnâ€™t believe the saying to be so, he still feels the oppression from a supposedly â€œfallenâ€ regime.

â€œEven I built these promises [as a politician] and saw I could not do anything,â€ says Dinev. â€œI didnâ€™t want to lie to the people.â€

Dinev hasnâ€™t voted in the Bulgarian elections since his arrival in the U.S.

Due to the political corruption in Bulgaria, the economic state suffers as well. Recent legislation pushed the retirement age back to 63 for men and 61 for women, as well as increasing the point system which is based upon the age and years one has worked.Â  In addition to the age requirement, men must have 100 points and women 90. Thus a man of 63 must have worked for 37 years before being able to retire and receive a pension. This is only available to Bulgarians living in Bulgaria.

For Gecheva, this is only further reason not to risk her and her childâ€™s future. â€œOf course Iâ€™d prefer to go back to Bulgaria, but a lot of things need to change there to make me go back. Because now I have my family and I have my kids, and I want to in some way secure his future. And I donâ€™t see his future there at all in Bulgaria.â€ 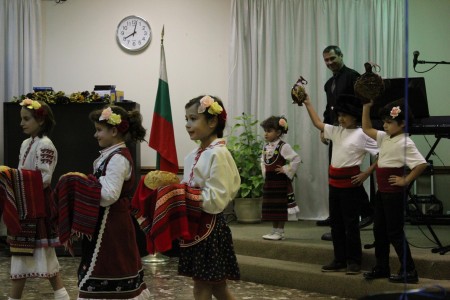 A traditional Bulgarian dance is performed for the celebration of the end of communism in Nov. 10, 1989. Bulgaria is known for its folk music and dance (Photo by Christina Walker).

With high rates of unemployment and economic turmoil, the new requirement makes it harder to collect the necessary points, especially for those soon to retire. And there is proposed legislation in the works to increase the requirements even more so.

Though Bulgariaâ€™s current government state differs from the Western vision of democracy, Dinev still holds out hope for the future. â€œI can say after five generations it will be changed, but not now.â€

â€œThere will be a day when the country will be just like we like it to be because of the young generation,â€ says Violetta Dinev. â€œBulgarian people are smart.â€