Children of immigrants return to their ancestral home for many reasons; to reconnect with their culture, to visit relatives, and recently for Korean-Americans, to find work. John Park was different. The Northwestern University senior went to seek fame, and he found it.Â John Park on Superstar K2

After competing on American Idol, one of the highest rated television shows in the U.S., Park turned trans-continental to audition for Superstar K2, now in its second blockbuster season in Korea. More than 1.3 million others auditioned, and Park made it into the final round, finishing second to Huh Gak.

Not everyone is looking for fame however, and young Korean-Americans are increasingly turning to the homeland for work opportunities, particularly in teaching. The Korean Ministry of Education, Science and Technology sponsors two programs: Teach and Learn in Korea (TaLK) and English Program in Korea (EPiK), both aimed to attract native English-speaking Koreans. Participants are placed in schools where they provide a valuable service to students who want to learn English to excel in an increasingly global job market.

Jessica Yum, a 24-year-old who was raised in Chicago, taught for a similar program, English Teachers in Seoul, which is sponsored by the Seoul Metropolitan Office of Education. â€œThereâ€™s a new movement going on, I think thatâ€™s why the South Korean government started this program. They wanted the new generation of Korean youth to be bilingual, but also to have a confident grasp of English to remain globally competitive,â€ she says.

As economies across the world are becoming more interconnected, many countries are reevaluating their relationships with outsiders. â€œThe Korean peninsula has always been kind of xenophobic,â€ Yum says.Â  â€œBut now with the South Korean governmentâ€™s very intimate relationship with the U.S. government for foreign policies, thereâ€™s this desire to make the South Korean youth more competitive.â€

David Hong, 24, was born in Seoul, but moved with his family to Chicago when he was two. He took a year off from his college education to teach English in Korea. â€œI wanted to take a break from school. I just thought that since Iâ€™m Korean, I should know my mother countryâ€™s roots a little bit; to know the people and to know the language a little bit more,â€ he says. â€œI was losing touch with that.â€ 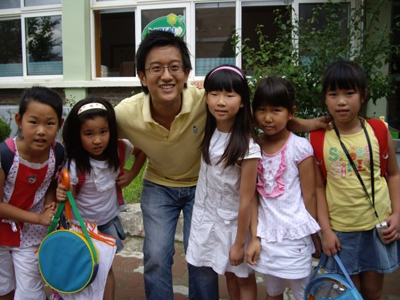 David Hong with some students. / Photo courtesy of David Hong

After graduating from Northwestern University in June, Hong returned to Korea again to pursue a love interest and a job. He now interns at the National Assembly of Korea in the Foreign Affairs, Trade and Unification Committee. Prior to getting this job, Hong wanted to start a business. After working for the National Assembly however, he has found a new passion. â€œIâ€™ve become more interested in the unification of North and South Korea,â€ he says.

While Hong plans on returning to the United States after his internship, he is not going to abandon his interests in Korean affairs. â€œPeople here have been telling me that itâ€™s a better idea if I get more knowledge about North Korea and go to the U.S. government and work from their perspective,â€ he says.

A generation ago, many Koreans immigrated to the United States in search of economic opportunities. Today, some of the children of these immigrants are returning to Korea for the same reason. In light of the current uncertain economic conditions in the U.S., Korea in some cases provides more stable job opportunities, especially to those who are fluent in both Korean and English.

Steve Ahn was born in Korea but moved to the Chicago area with his family when he was six. After graduating college and completing law school, he started working at a Chicago-based law firm doing insurance litigation. After a while, he was ready for a change.Â  â€œI had a cousin visit from Korea and he suggested that I move out to Korea because there were many different job opportunities for somebody with my skills.â€

He interviewed with a Seoul-based law firm, and was hired. Ahn now works there as a foreign legal consultant. While he was drawn to Korea by employment opportunities, Ahn plans to stay for entirely different reasons.

Cultural connections are another important factor that draws Korean-Americans back. â€œI wanted to come to Korea because I always constructed my identity around being Korean but Iâ€™ve never really lived here,â€ says Joyce Kim, an activist/organizer with the Youth Humanities Library. Kim was also born in Seoul and raised in Chicago. She is currently working to connect Korean-American activists with Korean youth and educate them on social issues.

Regardless of why they decided to go, what job they had while they were there, or whether or not they will stay, Korean-Americans invariably rediscover their heritage and form lasting bonds with their motherland when they return to work.

â€œI will always have a connection to Korea,â€ Yum says.