Back home for Venezuelans: Itâ€™s all politics

As JosÃ© RodrÃ­guez waited enthusiastically for his upcoming departure to Venezuela in December 2002, he heard the news that all flights to Caracas had been cancelled. The insecurity in the country had evolved into an oil strike and opposition demonstrations started taking place nationwide almost daily.

Then a sophomore at Western Michigan University, RodrÃ­guez was looking forward to going home for winter break, but now, worried about his family, he had to spend the holidays at a friendâ€™s house in Kalamazoo, Mich. 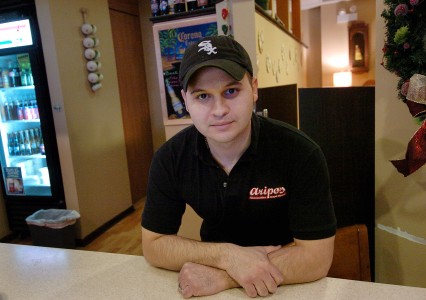 RodrÃ­guez went back to Venezuela in 2006, but only stayed for a year. He returned to the U.S. with a work visa in 2007, and now runs Aripoâ€™s Venezuelan Arepa House in Oak Park with his wife Laura. He hasnâ€™t been home since.

Managing his own business makes it harder for RodrÃ­guez to visit his family abroad, but he says he wishes his children would get to know the country where their father was born and raised.

Yet, he would only be willing to live in Venezuela again if he noticed a shift in mentality among the people.

“There must be more unity, which doesn’t seem feasible right now,” he says. “Chavistas or not, we’re are all Venezuelans after all.”

Aripoâ€™s menu features native dishes from back home, such as arepas and cachapas, but the ingredients donâ€™t come from Venezuela, RodrÃ­guez says.

“I get the ingredients for the arepas easier than anyone in Venezuela, because my supplier has relocated to Colombia,” RodrÃ­guez says. “Even the most basic items have been scarce for everyone.”

When Venezuelans living in the U.S. talk about home and the changes theyâ€™ve noticed since 1999, the year Hugo ChÃ¡vez first took the office as president, more often than not, the conversation boils down to politics.

Lena and her husband, Ricardo Rosquete, are Venezuelan and have lived in Lake Zurich since 2001. They left Venezuela because they wanted better job opportunities.

The initial plan was to stay in the U.S. temporarily â€” two to three years at most. The couple considered going back home so they could be with their families, but they changed their plans and extended their stay.

While Lena openly criticizes ChÃ¡vez, Ricardo says he has a neutral stance on Venezuelan politics. Still, the couple generally agrees on the changes they have observed back home.

â€œThe country is completely polarized. There are those who are with ChÃ¡vez and those who are against him,â€ Lena Rosquete says. â€œThereâ€™s too much intolerance in Venezuela in terms of interpersonal relations right now.â€

â€œOne of the things that worries me the most about Venezuela and my family is safety,â€ says Ricardo Rosquete, an electronics engineer for Motorola Inc.Â  â€œYou have to 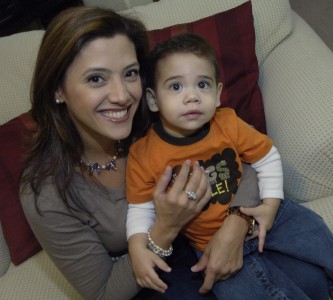 pay more attention, make sure no one is following you, avoid certain places, depending on the time of the day.â€

They are now raising a 15-month-old son, Bruno. As much as they would like him to grow up in Venezuela, near their families, they also want to be able to ensure him a safe environment.

â€œWe want our baby to grow up in a peaceful place, where he can express his opinions â€” no matter what they are â€” where we can take him to a park, without fearing he might be kidnapped or we could get robbed or killed,â€ Lena Rosquete says.

The Rosquetes are unsure what the job market would be like if they went back to Venezuela any time soon. They donâ€™t trust the official unemployment figures, which have been above eight percent since January 2010, according to Venezuelaâ€™s National Institute of Statistics.

More importantly, they fear they might still face persecution for signing the so-called â€œTascÃ³n list,â€ a petition for the recall of ChÃ¡vez, in 2004.

The referendum was defeated, but in response, the president requested that the National Electoral Council provide the names of all signers.

Luis TascÃ³n, a deputy of the National Assembly at the time published the list of the more than 2.4 million names along with their identity card numbers on his website.

The Venezuelan Consul General for Chicago, JesÃºs RodrÃ­guez, confirms that persecution was a reality between 2003 and 2005. But, he says that is no longer the case.

In addition, he says that the government was not the only agent targeting individuals whose names were on the list â€” private companies also used it to lay off ChÃ¡vezâ€™s supporters.

â€œAfter the oil strike, it felt like the country was really in war. We, on the public administrationâ€™s side, had to think strategically about all measures and decisions we took in order to maintain political and economic stability in the country,â€ the consul general says.

Now that the list has been archived, the consul general believes people are learning to overcome the polarization back home. The overall living standards have never been so high, either, he says.

â€œThe self-esteem, of the poorest mainly, has never been this high,â€ JesÃºs RodrÃ­guez says in relation to basic assistance programs provided by the government. For him, itâ€™s the first time the government has focused on families from low-income backgrounds after years of elitist rule.

Yet, although the â€œTascÃ³n listâ€ was archived officially in April 2005, JesÃºs GonzÃ¡lez still feels directly affected by the retaliation. â€œDespite my qualifications, I canâ€™t get a stable job back home because my nameâ€™s on that list.â€

Tired of short jobs and being unemployed, GonzÃ¡lez came to Chicago six months ago to improve his English and take his chances with a new life.

He would like to further his education in the U.S., but in order to do so he would need to access his savings in Venezuela. That too triggers a political issue for GonzÃ¡lez that dates back seven years.

In February 2003, ChÃ¡vez created the Commission for the Administration of Currency Exchange. The institution regulates foreign exchange in the country and establishes a different fixed exchange rate for different sectors of the economy. For instance, for all basic goods and the public sector, a U.S. dollar is equivalent to VEB 2.60 whereas the rate for most industries is around VEB 4.30 per U.S. dollar.

Although the program was designed to stabilize the Venezuelan economy and make it less vulnerable to capital flight, GonzÃ¡lez says for him it only creates hardships.

â€œI have enough money to live comfortably here, but I have to live on $650 per month,â€ he says. â€œLuckily, Iâ€™m a student and can exchange a little more money.

GonzÃ¡lezâ€™s mother, Marianela Barbosa, feels torn about having her two oldest sons in the U.S. while she raises her two youngest sons back home. â€œI know they have to leave to school, but donâ€™t really know if theyâ€™ll come back every day,â€ she says during a visit to Chicago.

Barbosa is concerned most about her oldest son, Carlos. He fled the country last year due to political persecution relating to his involvement in student movements and the opposition parties such as â€œUn Nuevo Tiempo.â€

One night, Carlos was coming back home from a political meeting and his wife opened the house gate for him as usual. When he noticed some movement on the street, he pulled his wife by the arm and ran inside.

â€œWe heard 12 gunshots,â€ he says. â€œWe obviously spent the night on edge, my son crying and scared. The following morning, when I went out, there was graffiti on the wall that said: â€˜Muerte a los Barbosa.â€™â€

Carlos decided to leave immediately to Miami and hasnâ€™t seen his wife and son since then.

After living in the U.S. for nine months, he was granted political asylum and is now in the process of petitioning for asylum for his family as well.

During a family reunion in Chicago, Barbosa and her sons went out for a typical Venezuelan meal at Aripoâ€™s Venezuelan Arepa House.

The conversation? Politics, of course.