The castle west of Midway: Lithuanians recreate the homeland

Grand Dukes Restaurant doesnâ€™t look, feel, or sound like Chicago. For most of the people who visit on an average day, itâ€™s not. Itâ€™s Lithuania.

The exterior of the Summit Argo, Ill. restaurant is decked in colorful signs and banners, advertising various beers in honor of Oktoberfest, and crowned with a bright yellow sign declaring â€œEuropean and American Homemade Cooking.â€

The interior is stocked with a mixture of dark furnishings, bright lights and advertisements â€” almost all of which were brought from more than 4,000 miles away.

â€œWe brought everything from Lithuania, actually,â€ says Laura Varenbergaite, wife of owner Andrius Bucas. â€œAll of the wood and everything that you see, all the chairs and everything.â€ Varenbergaite jokes that the interior looks, â€œlike a little castle, maybe.â€ 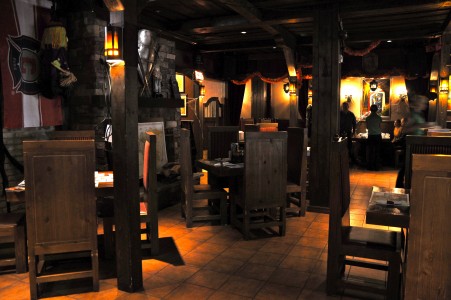 All of the wood and decorative pieces filling Grand Dukeâ€™s interior were imported directly from Lithuania in the hopes of giving the restaurant an authentic feel.

For some, Grand Dukes is just a place to get some unusual food in a unique atmosphere. But for many of the Lithuanian immigrants who frequent the restaurant located four miles due west of Chicagoâ€™s Midway Airport, Grand Dukes is a chance to connect with a culture they left behind in favor of economic opportunity.

â€œI just came in for dinner,â€ says Jola, a waitress at Grand Dukes who declined to give her last name. â€œI liked it because it reminds me of Lithuania a lot, and [then I decided] that I want to work here.â€ 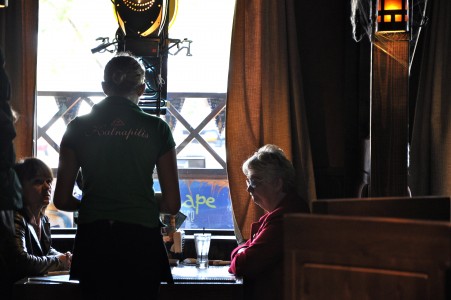 Waiters and waitresses are often bilingual, happy to engage in conversation in their native tongueâ€”Lithuanian. Young Lithuanian immigrants like Jola (pictured above) are part of a new â€œthird waveâ€ of immigration. Although they come for various reasons, such as vacation or to visit family, they often stay for economic reasons.

Jola, 28, came to the United States five years ago to be with her boyfriend. But like many Lithuanian immigrants, she stayed to take advantage of opportunities she wouldnâ€™t have back home.

â€œI am a music teacher,â€ says Jola. â€œI would never get a job in Lithuania, because you have to be the best of the best, and a lot of talented people live there.â€

Historians traditionally refer to Lithuanian immigration to the U.S. in two waves. The first wave arrived in the early 20th century amidst rising economic pressures resulting from industrialization in Lithuania. The second began after the Soviet Union occupied Lithuania, when many fled to the U.S. for political safety.

But Jola, and young immigrants like her, are part of a new â€œthird waveâ€ of immigration. Although they come for various reasons, they stay, like the first wave, for economic reasons.

Egle Gintautaite came to the United States when she was 15 after her family won green cards in a lottery. A Christmas visit to an uncle in Chicago became a permanent move to a country where she neither spoke the language nor knew how to dress.

â€œMy brother had comb over hair and wore sweater vests; I wore panty hose and blazers,â€ Gintautaite says. â€œIt was a culture shock for sure.â€

Now 22, Gintautaite says it just wouldnâ€™t make sense for her to move back to Lithuania.

â€œI have considered moving back for good and it is a strong possibility,â€ she says. â€œHowever, I would only move if I had a solid job offer there.â€

And, Gintautaite says, the important part is not whether or not a Lithuanian lives in Lithuania, but that they feel a connection to their heritage regardless of their locationâ€”something that is easier in Chicago than most places. 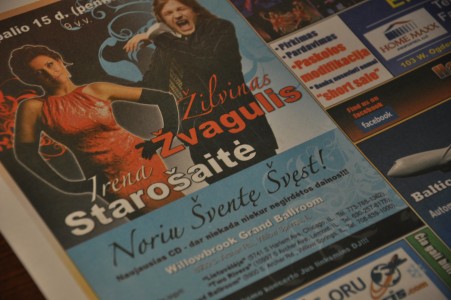 â€œThere is a huge community of first and second wave immigrants. There are multiple Lithuanian restaurants and delis; we can buy Lithuanian food and alcoholic drinks [from Lithuania],â€ Gintautaite says. â€œMany American families are split up between states and it is only possible to get together on holidays, so thatâ€™s the way I see my situation.â€

Jola agrees, especially when the Lithuanian culture she experiences at Grand Dukes is so vibrant.

â€œA lot of Lithuanians still come [to Grand Dukes], and they â€¦ like to talk in Lithuanian,â€ says Jola. â€œEven people who were born here â€¦ they want to [speak Lithuanian].â€

Training to become a nail technician, Jola canâ€™t be persuaded to go back to Lithuania. Although she misses her family, she says she hopes they will move to the United States to be with her.

But, Jola says, the move to the U.S. was the right one for her. Like many young immigrants, she looks forward to the opportunities she now has.