Do refugees come to the United States with a clean bill of health?

The barrier to entry into the United States frequently comes in the form of oneâ€™s own immune system for refugees seeking resettlement in the United States. U.S. law stipulates that resettlement exists as a humanitarian policy for individuals who have faced or fear persecution due to race, religion, nationality, political opinion or membership in a particular political group. Not all refugees fitting these criteria will be eligible for resettlement, however.
Health becomes an important factor in determining the acceptance of a refugeeâ€™s application, and a paradox arises as U.S. officials struggle to accommodate the most vulnerable refugees who could be more susceptible to adverse health conditions, and protect the American public.

â€œDo they come with a clean bill of health?â€ Judith Weinstein, the director of Heartland Health Outreach, a subsidiary of Heartland Alliance, says of the refugee population she works with in Chicago. â€œNo, of course not. Just by definition a refugee has experienced some kind of traumatic experienceâ€¦So, that is a very complicated question.â€

Coming to America: the barrier of disease

For the millions refugees worldwide living in refugee camps or affiliated urban areas, resettlement to a third country is rare; the United Nations High Commission on Refugees (UNHCR) reports that less than one percent of refugees are ever resettled. The United States receives one half of those who make up that one percent, more than any other nation in the world.Â  Despite this relatively high number of acceptances, however, the process for refugees to be granted admission to the U.S. is not easy.

In the majority of cases, the UNHCR must refer a refugee to the United States Refugee Admissions Program (USRAP) in order for that person to be considered. A referral from the UNHCR does not guarantee resettlement, however. Refugees must also pass background checks, have an interview with a United States Citizenship and Immigration Services officer, and, finally, have a health screening.

The Centers for Disease Control and Prevention (CDC) regulate this screening process through a network of 400 physicians abroad and 3,000 physicians in the United States who carry out specific guidelines for medical assessment of refugees to determine eligibility for living in the U.S.Â  Before departing for the U.S., refugees are tested for communicable diseases such as tuberculosis, leprosy, and yellow fever, among others, and must also have completed or started a full set of vaccinations.

Mansha Mirza, a postdoctoral fellow at the Northwestern University Feinberg School of Medicine specializing in refugee health, describes the maze-like system that refugees must navigate once recommended.

Refugees, she explains, â€œalready will have undergone some health screenings while they were overseas in refugee camps even before they come [to the United States]. And if found to have some infectious diseases, say, tuberculosis or something, they have to go through a period of treatment over there until they get to a point where itâ€™s no longer infectious, and only then are they allowed [into the country].â€

Testing positive for tuberculosis, or another infectious disease deemed â€œinadmissibleâ€ by the CDC, can mean a delay of six months or longer as the refugee is treated in an overseas clinic that often is not optimally equipped or staffed, says Mirza.

Despite this seemingly rigorous admissions process, though, the health condition of many of the refugees who resettle in the United States is far from perfect.

Health upon arrival: beyond infection 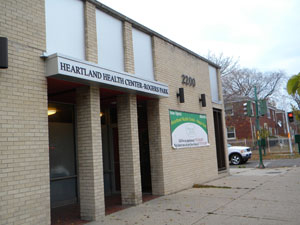 The Heartland Health Center in Rogers Park is one of two public health clinics in Chicago that offers comprehensive primary care free of charge for refugees.

Examinations overseas constitute only round one in a lengthy contest of assuring a level of well being for an individual. Upon arrival, a case worker assigned by a resettlement agency will escort a refugee to a refugee health clinic in the area. Here, another round of screening begins. This time, however, refugees are aided by a federally funded program.

â€œLegally, after they come to the United States, [refugees] get something called Refugee Medical Assistance for eight months from the time of arrival,â€ says Mirza.

Mirza explains that RMA starts by covering the initial screening.Â  From that point, â€œif they need any health services they can have those covered as well, and what they get is the same as whatâ€™s available for residents of that city,â€ says Mirza. â€œAll the services that are available to Americans on Medicaid are available to refugees with RMA.â€

Flutra Sahatqija arrived in the United States over ten years ago with a clean bill of health because she was able to access comprehensive healthcare services in Skopje, Macedonia.Â  Now a Senior Program Assistant at the Heartland Alliance Marjorie Kovler Center in Chicago, Sahatqija explains the importance of RMA in her own experience and in general for new refugees to the US. â€œWith [RMA], you have no problem,â€ she says.Â  â€œAll refugees get this card from the state, and you just show the card and you can be treated.â€

Despite access to services, though, health problems can persist for refugees suffering from chronic, noncontagious conditions.Â  In initial health screenings in the U.S., â€œthey donâ€™t even go there,â€ Mirza explains. â€œItâ€™s not their concern at the timeâ€¦At the most there will be a general physical and general mental health exam.â€

Weinstein also attests to the unique health needs of the refugee community in Chicago. Traditional health concerns, like tuberculosis, remain, she says, but noninfectious conditions are becoming increasingly significant. 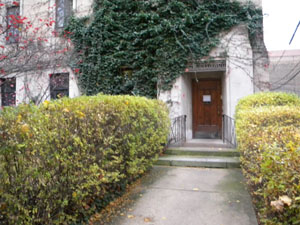 The Heartland Alliance building on Albion Avenue is home to the Heartland Refugee Health Education and Promotion program, and is a place where refugees can access multilingual health education materials.

Some chronic conditions affect refugee communities more generally. RefugeeOne, another one of Chicagoâ€™s most active refugee resettlement agencies, reports that the majority of refugees leave their homes because of war, and that a larger and larger percentage of war victimsâ€”from 5% to 90% in recent decadesâ€”are civilians.Â  As a result, Mirza explains, refugees who come to the United States with violently acquired disabilities are not uncommon.

â€œDisabilities are a big issue in the refugee community,â€ Weinstein says. No matter how the condition is acquired, many affected persons go without the treatment they need, she continues, because refugees often are not connected with the services they are qualified for through Medicaid.

Recuperation and adjustment: for refugees, health is not only physical

More difficult even than screening for and treating noncontagious conditions, though, is providing adequate mental health care for the thousands of refugees who enter the U.S. each year.

All refugees are supposed to be offered free mental health screening under RMA. Yet lack of resources compromises its availability and follow up. â€œHardly one in ten refugees in Illinois has access to mental health care,â€ says Greg Wangerin, executive director of RefugeeOne.

Last spring, the World Reliefâ€™s Horizon Clinic, one of Chicagoâ€™s two clinics providing mental health services for refugees, closed due to lack of funding. Heartland Allianceâ€™s International Family, Adult, and Child Enhancement Services (FACES) program is now the only provider of mental health services for refugees in Chicago. The services at International FACES are free, though some costs are recovered through Medicaid. Federal and state grants also help cover the programâ€™s costs.

With this funding, International FACES is able to offer comprehensive mental health services, says Thad Rydberg, the clinical manager of the program.

The services also address issues that are more specific to the unique circumstance of refugees in Chicago. For them, adjustment to life in the United States can be more difficult than any physical health issues, and these less traditional mental health services focus making the transition easier. 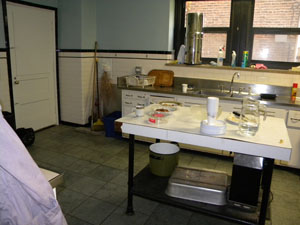 Cooking classes are one way that Heartland helps refugees adjust to life in the United States.

â€œWe have a number of groups that are culturally specific,â€ Rydberg says. â€œWe have a gardening group, we have a cooking group.Â  We have a lot of different activities going on that people can participate in.â€

Even in a city with care like that offered by International FACES, though, mental health can remain a low priority for refugees, who might be hesitant to seek out these services.

Mental health becomes â€œthis piece that might be overlooked a little more when we look at refugees and the health of refugees,â€ Rydberg explains. â€œIn many cultures, including ours, itâ€™s a little bit more acceptable to go to a doctor if your foot hurts than to go take services if youâ€™re having difficulties emotionally.Â  Also, refugees are trying to adjust to so many things that they may see it as a lower priority than the pressure they feel to get a job and learn English.â€

Resettlement and health as a human right

The nuances of health for refugees before, during, and after eventual resettlement complicate an already complex process.Â  Refugees seeking resettlement are fleeing persecution in their home country, and in the process of migration often encounter circumstances that make them susceptible to serious, and sometimes contagious, health conditions.Â  Even if a refugee is able to receive adequate healthcare to pass the United States health screening abroad, problems can persist once in the United States, where healthcare services can be disparate and underfunded.

In spite of these complications, though, Judith Weinstein considers refugee resettlement to be more of a humanitarian issue than a potential medical concern.

â€œI donâ€™t want people to think refugees are coming into our country and theyâ€™re sick. You canâ€™t think of it in that way.Â  You have to think of it as a human rights issue, as a humanitarian issue,â€ Weinstein says. â€œWe do not resettle people who are healthy, and not sick. We resettle people who are victims of politics and discrimination and gross violations of human rights.â€