How are refugees treated in other countries compared with the U.S.?

[Read the full profile at Thoung Shwe: A Burmese refugee with time to share]

After a six-hour ride, 18 first-time fliers stepped off the plane and were greeted by television crews, outnumbering the travelers themselves. â€œWelcome to Japan,â€ read a banner at Japanâ€™s Narita International Airport Sept. 28.

These Burmese refugees were the first to be resettled in Japan, arriving to a warm welcome and great fanfare. Japan is piloting a program in which they will welcome 90 refugees over the next three years as the first Asian nation ever to become a resettlement country. The refugees will be provided with apartments in Tokyo and will have access to Japanese language and cultural lessons in addition to vocational and job training. 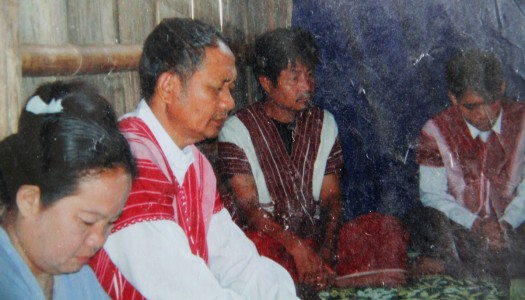 Thoung Shwe, seated second from left, a Karen refugee, chose to resettle in the United States over other countries after hearing from fellow refugees in Europe and Australia. / Photo courtesy of Thoung Shwe

It remains to be seen how the new Japanese resettlement system will compare to that of other established resettlement countries. Elsewhere over the past decade, Canada has played an increasing role in resettlement. Since 2002, it has been among the top three resettlement countries worldwide, along with the United States and Australia, according to the United Nations High Commissioner for Refugees (UNHCR). The Canadian government offers a variety of programs to refugees once they arrive, such as health insurance, free language assistance and loan arrangements.

However, as is the case with many other resettling countries, these programs suffer from severe underfunding. More recently, according to the Canadian Council for Refugees, bills have appeared before the Canadian Parliament that would limit the influx of refugees, cutting against the grain of the countryâ€™s long-held reputation for welcoming immigration policies.

In contrast, a refugee arriving in America, after receiving a grant of $900 from the government, often has to rely on private aid organizations.

â€œThe way the system is in place, most of the burden falls on groups like us, in terms of housing and transportation,â€ says Chuevang Xiong, Director of Refugee Services at the International Institute of Wisconsin, a resettlement agency in Milwaukee. â€œAt the same time, our government makes some social services available, like food stamps, which other resettling countries do not offer.â€

With its successes and shortfalls, treatment of refugees in the United States reflects many of the characteristics of the imperfect durable solutions for refugees and asylum seekers worldwide.

Among those receiving the brunt of criticism, Australia has come under fire for its mandatory detention program. First implemented in 1992, it mandates that those entering the country without a valid visa be held in detention while asylum is decided. All nations generally enforce the detention of people entering without visasâ€”including asylum seekersâ€”but several cases of wrongful detention and harsh conditions in the Australian detention camps have been documented. Changes in the legislation in 2001 allowed for indefinite detention, fueling the controversy and igniting the interest of human rights groups.

In 2008, Australiaâ€™s federal Labor government announced it would release asylum seekers more quickly. In October, Prime Minister Julia Gillard said more families and children would be moved out of detention centers and into community-based living circumstances.

The Heartland Alliance National Immigrant Justice Center, which assists asylum seekers and refugees in Chicago, has employees who have worked in Australia. The organization published a report last year specifically looking at the Australian model.

â€œTheir system has really come to be a much more civil system but… itâ€™s not quite where we would like them to be,â€ says Tara Tidwell Cullen, Heartland Alliance NIJCâ€™s associate director of communications. â€œAt least half of them have no criminal record and pose no threat to the community. They should be allowed to pursue their [legal] cases from their own communities and their own homes.â€

While Australiaâ€™s system has received considerable media attention, it is not the only country with problems. Consistently taking in the largest number of asylum seekers annually, the United States is still criticized for the process. The U.S. also enforces automatic detention of asylum seekers arriving without visas, including the holding of children and families. Detainment can last anywhere from a week to several years, depending on individual cases. Access to legal counsel, which Cullen says is unfortunately uncommon and underfunded, also plays a role in whether asylum seekers must wait for their trials in detention or are allowed to live in their homes pending a decision.

â€œI think that this is a problem that people face in a lot of different countries, to make [the process] more humane,â€ Tidwell Cullen says. â€œWe [in the United States] have one of the more punitive systems in the world. Sweden or Switzerland has a more liberal policy for asylum seekers where Iâ€™ve actually heard once people are released from detention, they receive cell phones to check in with the immigration office.â€

The NIJC is just one organization pushing legal reform in the United States. Australia is also taking steps to improve its immigration policy, but asylum seekers there still face obstaclesâ€”for example, applications from Afghans and Sri Lankans were suspended for six and three months, respectively, in an effort to control the overwhelming number of asylum-seekers and send a message to people-smugglers that not everyone is guaranteed asylum.

With the numbers of displaced persons rising as a result of escalating conflicts in Iraq, Afghanistan, and elsewhere in the Middle East, many other countries have scaled back their admittance of asylees. Even Sweden, which has welcomed hundreds of thousands of refugees since World War II, has shown signs of easing out of the role of empathic host. UNHCR statistics show that in 2007, Sweden accepted nearly three quarters of the 18,559 Iraqis seeking asylum; last year, not even one-fourth of the 2,297 Iraqis who arrived were accepted.

â€œThe sad thing is that a lot of the world is not very different from us [in the United States],â€ Tidwell Cullen says.

Statistics seem to indicate otherwise: Australia accepted 14 percent of asylum applicants from China in 2009, whereas the United States accepted 35 percent and Canada 58 percent, according to Rebecca Hamlin, assistant professor of political science at Grinnell College.

“But the differences might only be in procedural justice,â€ Hamlin says. â€œA person seeking asylum might be as likely to be successful in all three countries [Australia, the United States and Canada].”

However, Tidwell Cullen says, there is one place every country can begin to improve.

â€œItâ€™s easier to mistreat people when they have nowhere to turn, when thereâ€™s no one on the outside to help them,â€ she says. â€œAccess to counsel is pretty limited across the spectrum.â€