How many refugees were allowed into the U.S. last year? From where? And how are those decisions made?

[Read the full profile at Shanti Niraula: The future is not there, itâ€™s here]

Shanti Niraula rode in the back of a truck to the border of Nepal and India when he and his family fled from Bhutan. At the time, Niraula was two years old.

He and his family stayed in a hut at a camp in Nepal for 18 years until February ofÂ 2010, when they were chosen to resettle in Chicago.

Under the U.S. Refugee Act of 1980, the United States only resettles those who fit under the United Nationsâ€™ definition of a refugee, which is a person with a well-founded fear of persecution for reasons of race, religion, nationality, political opinion, or membership in a particular social group. 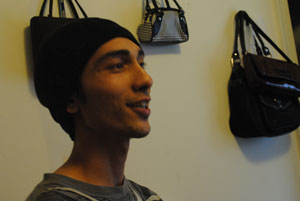 Shanti is a 20-year-old refugee living in Chicago.

The Niraulas are like millions of refugees in the world who fit the definition provided by the United Nations, but there is a limit to how many refugees the United States is willing to accept annually. The United States resettles more refugees each year than all the other nations in the world combined. In 2009, for instance, some 90% of those refugees who were referred for resettlement by the United Nations High Commissioner for Refugees (UNHCR) were directed to three countries: United States, Canada, and Australia. Other countries that resettled refugees included Germany, Sweden, Norway, Great Britain, Finland, Denmark, the Netherlands, New Zealand, France, Italy, Switzerland, Belgium, Chile, Portugal, Japan, Romania, Argentina, Brazil, the Republic of Korea, Uruguay, Luxembourg, Ireland, the Czech Republic, and Spain.

U.S. policy aims to provide resettlement consideration to at least half of all refugees referred by UNHCR worldwide, depending on availability of funds, and in 2009, actually resettled almost 75% of all refugees, according to a report to Congress submitted by the President. The U.S. government decides on a limit each year and creates a list of where those refugees will come from. Then, according to the U.S. Committee for Refugees and Immigrants (USCRI), an independent agency based in Washington, D.C., those families have to go through a lengthy process that includes medical screenings, security clearance and orientation to American culture, to finally make it into the United States.

Refugee status is granted to those who are unable to return home, and those who are chosen for resettlement in the United States have their cases transferred to the Virginia-based Refugee Processing Center. There, 10 volunteer agencies contracted by the State Department meet weekly to review and prioritize cases based on whether they have relatives already in the U.S. or if they are medically compromised in a way that will put society in danger. For instance, refugees with infectious diseases like tuberculosis, are unable to resettle in the United States. The Niraulas received refugee status and resettlement thanks to good health and ties to family that had already come to the country. 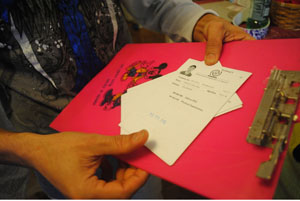 The Niraulas needed identification to enter the U.S.

This complicated selection process was repeated 74,500 times in the 2010 fiscal year for each refugee who arrived on U.S. soil. After several years in which total refugee acceptance to the U.S. dipped following the Sept. 11 terrorist attacks — the Center for Immigration Studies reports that a 25-year low of 27,000 refugees was admitted in 2002 — the numbers are once again stabilizing. With refugees arriving from all over the world, orientation to the United States is anything but standard. According to a U.S. Refugee Admissions Program (USRAP) report submitted to Congress in September 2010, in the past year the U.S. â€œhas admitted refugees from over 60 nationalities who were processed in some 90 countries.â€

Countries in the Near East and South Asia provided the overwhelming majority of refugees resettled in the United States during 2010, with 37,000 people mainly from Iraq, Palestine, Afghanistan, Iran, Tibet, Sri Lanka and Bhutan. The next highest numbers of refugees from particular regions were significantly fewer: The U.S. accepted 17,500 refugees from East Asia; 13,500 from Africa; 5,000 from Latin America and the Caribbean; and only 1,500 from Europe and Central Asia.

Considering the circumstances the government weighs when accepting refugees, the disproportionately high east and south Asian representation reflects the persecution and corruption that pervades the regionâ€™s political and social climates. The USRAP identifies religious freedom as a major consideration when choosing which refugees to resettle. In fact, the report says â€œsectarian violence in Iraq has resulted in what UNHCR, the international agency mandated to protect refugees, considers the largest dislocation in the Middle East since the Palestinian exodus following the creation of the State of Israel,â€ with 90 percent of religious minorities facing displacement.

The presidentâ€™s annual Report to Congress presented 2011 fiscal year admission proposals aimed at offering freedom to an even greater number of refugees. The report, which was created in conjunction with the U.S. departments of State, Homeland Security and Health and Human Services, set a ceiling of 80,000 refugees for 2011, and the caps on individual regions remain largely the same: According to the report, most refugees will be received from the Near East and South Asia, followed by East Asia, Africa, Latin America and the Caribbean and Europe and Central Asia. Based on trends outlined in the presidentâ€™s report that tracked immigration in recent years, combined with political, economic and religious situations that exist in each of the areas, the government determined that the current proportions fit the needs of refugees worldwide.

Outlining the numbers and qualifications for refugees to enter the U.S. is just the first step in the resettlement process. As Shanti Niraulaâ€™s family realized, receiving asylum is a long process involving a multitude of people, planning and priorities. However, the combined efforts of free countries like the U.S. and organizations like UNHCR, are committed to helping those who need safety and liberty most to achieve the standard of living that all humans deserve.