What is the first day for a refugee like? 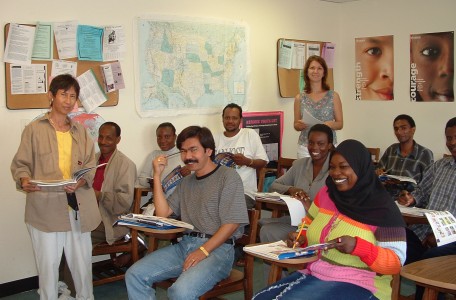 Dil Maya, a Bhutanese refugee who arrived to Chicago on Aug. 9, 2010, enters the room. She smiles. The English as a Second Language (ESL) class at RefugeeOne is taking a ten-minute break. Dil Maya lights up when I ask how her about her first day in Chicago.

â€œIt was very exciting,â€ Dil Maya says with a big smile, as if to picture the afternoon her family of five stood timidly at Oâ€™Hare International Airport. â€œWe were finally here.â€

Upon her first encounter with the Windy City, Kee, a refugee from Burma says, â€œChicago smelled different. It was more stuffy, not like the air in Burma. The smell was different.â€

Refugees like Kee and Dil MayaÂ found that adapting to a new life in Chicago would involve a number of major changes.

First day in the States

Typically, a refugee-service agency such as RefugeeOne is there to greet an incoming refugee family at the airport. A case worker assigned to the family may be accompanied by a translator fluent in the familyâ€™s native tongue. If they have a relative in the area, they usually come along as well.

â€œWe pick them up, and take them to their new home. I try to drive around their neighborhood for a little bit, and point out some key places first,â€ says Tori Duuos, a RefugeeOne case manager. â€œTheyâ€™re usually overwhelmed though, so we go slow.â€

The first night for a refugee may run the gamut of emotions. â€œWhen it was night, I felt no sleepy at all! And then I will try to sleep in the day, but then I canâ€™t sleep at night,â€ recalls Ganga Ram.

Ganga Ram shivers as he speaks, as if reliving the cold night in his new apartment. Dil Maya, Ganga Ramâ€™s sister nods eagerly and adds, â€œWhen we came, it was so cold, we didnâ€™t have enough clothes or enough of a quilt. In Nepal, itâ€™s always so hot and here itâ€™s so cold. But we were excited.â€

There is typically a hot meal prepared for refugees when they arrive at their new home. The familyâ€™s case worker will eat with them and go over how to use some of the appliances in the kitchen, but after the last guest leaves, the sense of being alone in a new world sinks in.

They might practice turning the shower on and off, or test the refrigerator to make sure it remains cold at night. Their case worker will invite them to a more in-depth orientation within the next few days but, until then, it is up to the family to navigate a strange new living space in a foreign city. Whom to call first, how to raise the room temperature, how to get started on the paper work â€“ it can be overwhelming.

The apartment that will become their new home is typically set up with basic items such as a refrigerator, a couch, a clock, and some beds. Discovering a new living space marks a full transition for most families and more importantly, a new way of life they must quickly adapt to.

The washing machine, electric stove and refrigerator may seem like everyday appliances to those of us that have used them for years, but for a recently arrived refugee family, these are small reminders that resettlement is a learning process full of surprises and challenges. Whenever there is laundry to do or food to be made, Ganga Ram and Dil Maya remember the life they left behind and the new one that is beginning.

â€œOh, the bed was so different. We used to sleep on bamboo mats in Nepal, but when we came here, there were beds. Itâ€™s a very big difference,â€ Dil Maya says. â€œI had no idea how to use a washing machine. Or kitchen utensils, like micro-oven. It was so strange.â€

She shivers; the young Bhutanese woman is still trying to adapt.

Indra, an interpreter at RefugeeOne, chimes in. â€œYeah, some of them donâ€™t know how to use the fridge, too. Some of them put the milk in the top, and it froze!â€

He chuckles as he recalls the many families who have frozen their milk or been apprehensive about using the electric stove for their very first time in the States. American homes and appliances are challenging for refugee families who have spent most, if not all, of their lives in refugee camps. 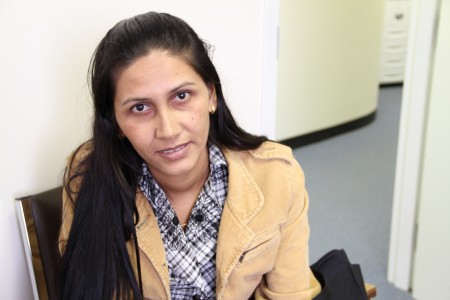 Dil Maya during her break at RefugeeOne

Out of the apartment and onto the streets; of cars and cold weather

When asked about refugeesâ€™ first few questions about life in the U.S., Duuos says, â€œThey ask a lot about weather.â€ For Esho, coming from northern Iraq meant he was accustomed to winter snow and freezing temperatures. What he was not used to, however, was the wind. â€œThis wind made me so cold, so much colder than Iraq,â€ he says. â€œBut itâ€™s not Iraq, and so itâ€™s okay. This is still paradise.â€

Other surprises include the cityâ€™s layout and public transportation system. â€œWe donâ€™t know how to cross the road, how to move around, how to use the bus and car,â€ says Kee, who is still in awe of the cityâ€™s tall buildings. â€œItâ€™s totally different, itâ€™s like a surprise. I donâ€™t have any direction how to buy and where to buy anything.â€

What surprised Esho most about the city is the traffic. â€œPedestrians walk in an order I have never seen in Iraq before,â€ he marvels. â€œThe rows of cars are so neat!â€

After having been here for about three months, the Bhutanese siblings are slowly settling in. Like many other refugees, they are taking English lessons and trying to find a job to support themselves and their parents, who still find it difficult and scary to adapt to this new culture in Chicago.

â€œSome of them over in Nepal told us it was going to be easy, but itâ€™s not,â€ they lament. As the winter approaches quickly, the Bhutanese family will have to find new ways to adapt – use a washing machine, sleep on beds and learn to navigate the transit system so that they can rebuild their lives Chicago-style.

* The story used only first names to provide our sources with privacy about their refugee status.