What is the legal status of asylees coming into the U.S., and how does that evolve as they remain?

[Read the full profile at Eugene Peba: A Nigerianâ€™s fight for survival and protection]

Standing in a crowded airport in the United States for the first time, Eugene Peba put up his hands and asked to be a political asylee. The process of applying for asylum took the young Nigerian more than two years, from November 2005, when he first arrived, until 2007. Most of this time, Peba spent in prison, detained among criminals.

Each year the United Nations High Commissioner for Refugees (UNHCR) determines a set number of individuals who will receive refugee status after being persecuted in their home countries. These individuals will be granted protection as they live in a foreign country. In 2009, 225,100 out of 923,400 individuals who applied were granted the legal status of refugee worldwide and allowed to settle elsewhere for protection. 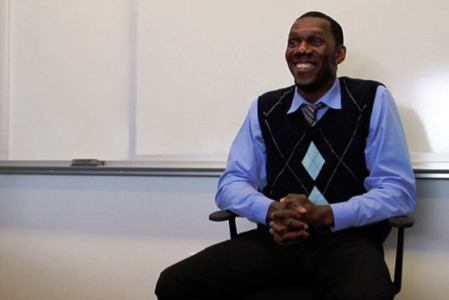 Â Â Â Eugene Peba shares his story with students at Northwestern University. Peba came to the Â Â United States from Nigeria in 2005 and has struggled to achieve status as an asylee.

Those, like Peba, who came to the United States after fleeing their homeland, but without having been previously determined as a refugee by UNHCR, must go through the alternative process of seeking asylum. Until late 2009 when U.S. policy changed, asylum seekers, like Peba, were detained when they first arrived in the United States. Pebaâ€™s detention continued, in part because of allegations that he arrived with false documents.

When in detention, asylum-seekers become part of the general prison population. â€œPeople [were] fleeing their countries hoping to come to America â€“ land of the free, home of the brave â€“ and then going to prison and the prison guards are going to treat them just like everybody else. Â There is no separation in a jail,â€ says Joyce Hughes, a law professor at Northwestern University specializing in immigration law.

In 2009, Immigration and Customs Enforcement (ICE) revised procedures to allow asylum seekers to be released from detention after passing a credible fear interview if they â€œestablish their identities, pose neither a flight risk nor a danger to the community, have a credible fear of persecution or torture, and have no additional factors that weigh against their release.â€ According to UNHCR, which has published documents regarding the debate on detention, many of those who were detained among criminals were â€œnot there by virtue of having committed a crime, but due to a breach of administrative procedures.â€

â€œAn asylum-seeker is someone who says he or she is a refugee, but whose claim has not yet been definitively evaluated,â€ according to UNHCR. In the credible fear interview upon arrival, an asylum officer determines whether or not the individual can claim the need for asylum based on their â€œcredible fear of persecution or tortureâ€ in their home country, according to U.S. Citizenship and Immigration Services (USCIS).

Between October 2009 and May 2010, a credible fear was established in 3,519 of the 4,504 interviews conducted, according to USCIS. Those who are determined not to have a credible fear may request review of the decision by an immigration judge. If no request for review is submitted or if the judge reaffirms the negative decision, applicants are sent back to their home countries. If the interviewer determines that there is a credible fear, the applicant continues the process in court where they may present a claim for asylum to an immigration judge.

The immigration judgeâ€™s decision depends upon a reasonable fear of persecution based on race, religion, membership in a political or social group and political opinion. The burden of proof is on the applicant to justify their fears. The success often depends upon whether or not the asylum seeker is represented by an attorney, according to Hughes. Eighty percent of applicants with attorneys are granted the status they seek while only 20 percent are granted asylum when not represented.

Many of the judges are former lawyers with â€œthe other side,â€ according to Edget Betru, an immigration attorney at Refugee Resettlement and Immigration Services of Atlanta. Because of their involvement with the Department of Homeland Security and similar agencies, â€œtheyâ€™re coming with a certain perspective or bias already,â€ says Betru.

In certain cases, the judgeâ€™s personal knowledge about the issue at hand may play an important part.

â€œ[Many judges] havenâ€™t had the kind of international exposure to understand that there are various cultural impediments to somebody expressing what theyâ€™ve experienced,â€ says Betru. â€œIf I donâ€™t understand that somebody whose culture tells them youâ€™re not supposed to talk about â€¦ torture or something else and Iâ€™m not looking to see if this is something that you donâ€™t feel comfortable talking aboutâ€¦ [Iâ€™m] going to miss something.â€

If the judge denies asylum, the applicant may appeal the case. If the appeal is denied as well, the applicant is then sent back to his or her home country. If asylum is granted, the person is able to reside and work in the United States.

Asylum status en route to citizenship is only at risk of termination if an individual is convicted of a crime, according to Hughes. An individual who maintains his or her status as an asylee is able to apply for a green card after being physically present in the United States for one year after being granted asylum.

USCIS provides forms and information, including documents that explain the process to refugees and asylees directly. USCIS encourages asylees to apply for a green card, according to its website, since the conditions in the asyleeâ€™s home country may change. This may nullify a fear of persecution and an asylee may no longer qualify for asylum status and â€œthe right to remain permanently in the United States.â€ Once an asylee receives Â a green card, the person has the opportunity to apply for American citizenship after five years of permanent residency.