What’s the difference between refugees and other immigrants, and how are those differences reflected in policy and practice in the U.S.? 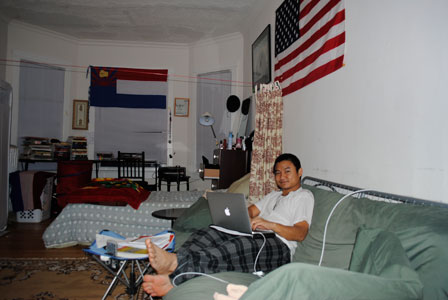 When Poe Clee arrived in Chicago in 2007, a refugee resettlement agency helped him find an apartment in Rogers Park. Unlike refugees, immigrants must find housing assistance independently after arriving in a different country.

For refugee Poe Clee, the community of Burmese refugees living in Chicago is like a second family. The community celebrates Thanksgiving together, they attend church every weekend, and they support each other’s children as if they were their own.

After relocating to the U.S. in 2007 from a refugee camp in Thailand, Poe Clee became connected to other Burmese refugees by the unique struggles that come with entering a new city.

“On the one hand, I kind of know what I’m doing here,” he says. “On the other, I’m kind of new to the city here. There’s a lot of things that I still haven’t been exposed to.”

Refugee is an important word for Poe Clee. Even though he shares the experience of resettlement with other immigrants, his experiences in the U.S. are different from others who do not share the same label.

Both immigrants and refugees relocate to new countries, but the reasons for the displacement and the conditions of resettlement vary between both groups.

A refugee is an individual who is forced to relocate to a different country because of a “well-founded fear”of persecution in the homeland for factors like race, religion, or nationality, according to Article 1 of the 1951 Convention Relating to the Status of Refugees. After resettling, a refugee can access financial grants, food, shelter and education through various agencies.

An immigrant, on the other hand, makes a personal decision to leave a country, according to Kiran Siddiqui, associate executive director for the Hamdard Center for Health and Human Services, which provides aid to South Asian and Middle Eastern communities in Chicago. This decision is sometimes based on a desire to improve economic status or to join family in a different country.

In terms of population, refugees and immigrants vary greatly. As of 2008, more than 60,000 refugees were admitted to the U.S. for resettlement, according to the Migration Policy Institute. In the same year, 1,107,126 immigrants obtained green cards.

Besides numbers, refugees and immigrants also differ in terms of the resources provided during resettlement.

“What we have seen is that there are more helpful opportunities provided to refugees in terms of their acculturation and acclimation into the country,” says Siddiqui.

After arriving in Chicago in 2007, Poe Clee remembers meeting his caseworker, Nina Music, at the airport. During his first few days in the U.S., she helped him sign up for food stamps and apply for a social security number. The process was confusing, he says, but it was made easier with the help of resettlement agencies.

“[Nina] said she was going to help me and she believed I was going to get a good a job here, so I felt ok,” he says.

Immigrants, however, do not have access to these resources automatically. While resettlement agencies can provide immigrants with services to ease the adjustment process, the services are not guaranteed. Instead, immigrants must find resources independently.

Along with access to resources, perceptions of refugees and immigrants are also different. Some people are more sympathetic to refugees than to immigrants, according to Doua Thor, executive director of SEARAC (Southeast Asia Resource Action Center), an organization that advances the interests of Southeast Asian Americans, including those with refugee histories.

While the U.S. government continues to welcome refugees every year, recent pushes to limit illegal immigration can raise questions: “Are refugees better than immigrants, or are immigrants better? Or, who is more deserving of aid?” says Thor.

Even though refugees might appear to have an easier adjustment to life in a new country, they also experience psychological issues as a result of trauma faced in the homeland, according to Siddiqui.

More specifically, the persecution that leads to resettlement can cause Post Traumatic Stress Disorder, depression and anxiety, according to Siddiqui. Poe Clee sought refuge in Thailand with his family after a Burmese army attacked his village. Though he did not suffer Post Traumatic Stress Disorder, trauma like this can create a need for counseling and group therapy after resettlement, particularly for older refugees.

“[For] a 60-year-old senior refugee who has just left, who was forced to leave and come [to a new country], it will be more difficult for them to assimilate to the new culture,” Siddiqui says. “They left their life behind.”

There are some commonalities between refugees and immigrants, though. While the circumstances contributing to resettlement may vary, both groups work to acculturate in a new country. This process comes with some shared challenges.

“One predominately familiar thing with both of them is the language barrier. That makes it difficult for them to communicate, for them to get jobs,” says Siddiqui.

Poe Clee might identify himself as a refugee, but he recognizes that the experiences of refugees and immigrants are fundamentally similar.

“It doesn’t matter if you are refugee or immigrant,” he says. “When you enter a country, you are starting a new life and you’re facing the same challenges.”

Along with these challenges, though, come rewards. For Poe Clee, resettling in the U.S. has given him an identity he did not have in his homeland of Burma. Regardless of his status, the process of resettlement has given him a feeling that he describes as “human.”

“We have a system [that helps] you become a permanent citizen here. You are legally recognized, authorized to work. You’ve become like a human being,” he says. “This is a very, very important thing. You feel like a human being.”