Who pays the airfare to transport refugees to the U.S., and how does it work? 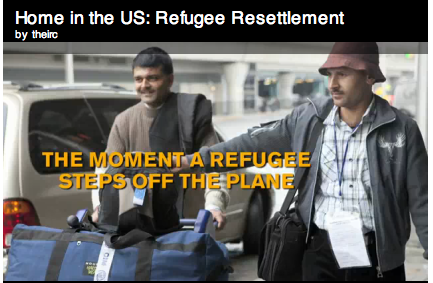 A representative from a sponsor agency is ready to greet the refugee upon his arrival in his resettlement location. The sponsor agency plays a critical role in easing his transition into what is often a vastly different lifestyle and is the refugeeâ€™s key ally when facing obstacles. (Image courtesy of the International Rescue Committee)

Boris Patrick Mouanou Ngoma stood outside of the Maya-Maya Airport in his home countryâ€™s capitalâ€”Brazzavilleâ€”with three suitcases in hand, unsure of what awaited him in Chicago.

â€œI was just thinking Iâ€™m leaving my country, and I donâ€™t know when Iâ€™ll be able to see those people [family, friends, etc] again,â€ says the 21-year-old Congolese native.

Fortunately, a representative from the International Organization for Migration (IOM) was by his side to hand him his plane ticket and identification tag and to make sure that his first steps towards the Air France terminal were ones that led him to a new beginningâ€”a life free from persecution.

That Thursday morning in August was the culmination of the month-long process of the IOMâ€™s Republic of Congo office assisting Ngoma with his departure. After arriving at Oâ€™Hare International Airport, he was received by his sponsor agency, the United States Committee for Refugees and Immigrants (USCRI), which helped facilitate every aspect of his transition into a new life as a Chicagoan.

The price of freedom, however, didnâ€™t come cheap.

For his plane ticket alone, Ngoma was indebted to the U.S. government for $1,300 since it had fronted that amount after agreeing to his resettlement in Chicago.

The U.S. government is reimbursed for the costs expended on U.S.-bound refugeesâ€™ plane tickets by the refugeesâ€™ sponsor agencies. These agencies, such as the USCRI, set up individualized payment plans for each refugee to collect what is owed.

Historically, the problem with this revolving loan fund is that low collection and repayment rates have resulted due to the lack of law enforcement and inefficient collection methods used by voluntary agencies. According to Nancy Kingsbury at the U.S. Government Accountability Office, the Secretary of State made policy changes in 1987 to address the problem/.

â€œThese changes ensure [among other things] that the sponsor agencies 1) establish loan criteria and milestones specifying when uncollected notes are delinquent and in default and 2) submit to State for further action the names and addresses of those refugees whose loans become delinquent,â€ Kingsbury explains.

Soon after settling into their new locations, refugees are required by the USCRI to sign a Promissory Noteâ€”a document legally binding them to individualized payment plans to pay off what is owed. To track the process, the USCRI assigns a loan ID number to each refugee and corresponding payment plan.

The U.S. Department of State Bureau of Populations, Refugees, and Migration requires that the agencies submit quarterly reports of these loan collections indicating amounts collected and remitted to the IOM. If an agency fails to comply with any of the Bureauâ€™s provisions, it risks being prohibited by the Bureau from utilizing funds received under this agreement for future resettlements.

Once a refugee finds a job, he can begin to pay back his loan; itâ€™s in his best interest to do so as soon as possible. According to the Bureau, repaying the travel loan promptly contributes to the future of the travel loan program, helps refugees establish a good credit rating in the United States, and avoids having the loan returned to IOM or the Department of State for further collection action.

As Achille Ngoma (Borisâ€™ father) puts it, â€œa refugeeâ€™s two main focuses are on settling into his new country and on getting a job to pay off the amount of his airplane ticket.â€

While appearing straightforward, the payment plan process has presented several individuals with problems. For example, Ngomaâ€™s father overcame the mishap of being â€œforgottenâ€ in the USCRI loan system. â€œI was confused when I heard my friends talking about paying off their payment plans because I hadnâ€™t received any invoices.â€ After calling USCRI to resolve the oversight, he was given a new loan ID number. With that problem resolved, he successfully completed his loan payment plan, which began his official credit history.

Unlike his father, Ngoma is still in the process of paying off his loan because he just recently arrived in Chicago in 2009, six years after his family came. He explains the payment plan as such: â€œThey send me an amount I have to pay each month. I pay $37 every month. When I have more money, I send $100, $75, or $50.â€ Now, a year after beginning his payments, he has only $800 of the original $1,300 remaining unpaid.

When asked if paying back the loan bothers him, he replies in the negative. â€œWe have the opportunity to come here so why not pay them [the host countryâ€™s government] back?â€

Additionally, it has become significantly more difficult for refugees to escape their loan payments because the Bureauâ€™s revised loan payment policy stipulates that the IOM require the sponsor agencies to provide the social security number of each adult refugee holding a loan. Past tactics such as changing addresses are no longer effective ways for refugees to avoid making payments.

For the refugees who persist in dodging payments nonetheless, there are penalties to encounter for failure to adhere to their payment plan.

The greatest blow to refugees who donâ€™t pay back their loan is â€œhaving their application for citizenship blocked,â€ says Kingsbury. For most refugees, the impending threat of enduring that penaltyâ€”one that precludes international travelâ€”is severe enough to deter them from veering off the course of their payment plan. 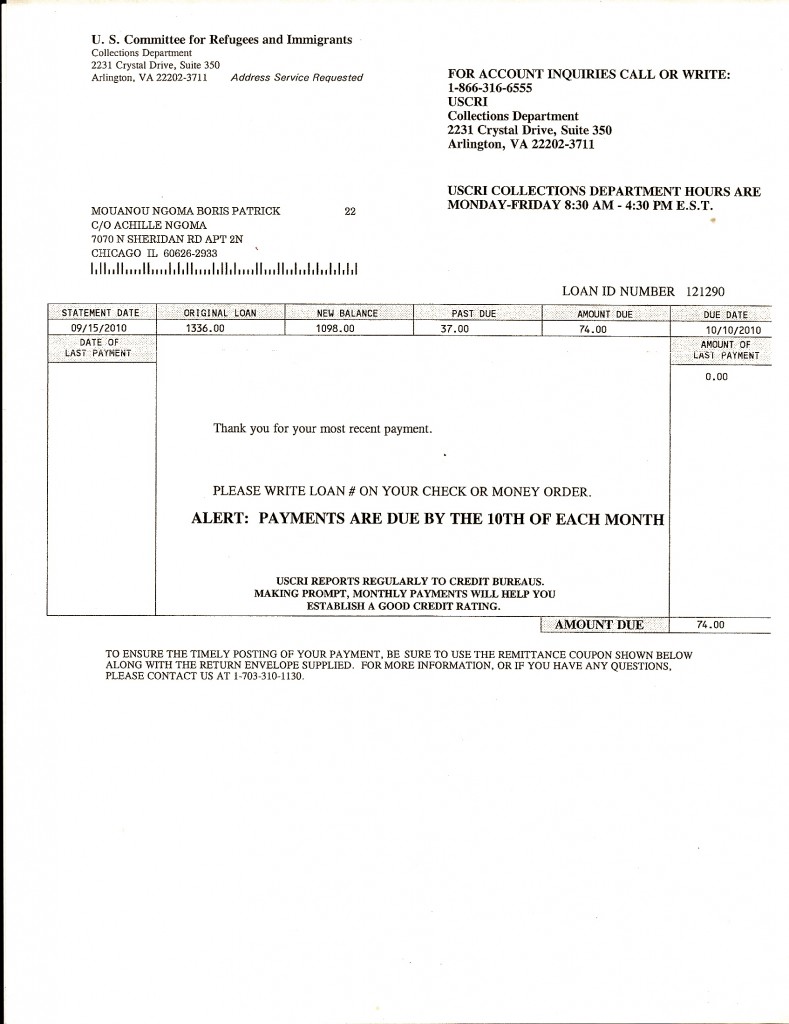 Below is one of Ngomaâ€™s monthly travel loan invoices issued by his sponsor agency, the USCRI. Failure to pay an invoice is punishable by law and can result in defaulting on his credit.