[Read the companion story: What are the complications for refugees when their families are separated?]

Jumatano Majaliwa has fond memories of his childhood in the Congo.

â€œIt was a good country, where people can sleep in the road. Nobody hate you or kill you or do something,â€ Majaliwa recalls from his apartment in Chicago. â€œWhen I was young it was a very, very good country.â€

Born in 1956, Majaliwa grew up in a home with parents he respected and loved, as well as a younger sister. Majaliwa eventually married two women and fathered five children. He worked as a teacher, educating 9-to-11 year olds. Working mostly for free, he would sometimes receive compensation, usually in the form of food but sometimes as a monetary gift from the studentsâ€™ parents. The lack of financial support did not bother Majaliwa. He became a teacher, knowing that he would not be paid much, if at all. He says he wanted to â€œhelp kids.â€

Political turmoil would change all that. When Mobutu Sese Seko came to power in 1965, life in the Democratic Republic of the Congo began to change for the worse. After two military coups, Mobutu officially ruled for 32 years until he fled into exile. Though he ran a corrupt government rife with nepotism, civilian life remained relatively stable during much of his reign. After he was overthrown, a number of rebel groups, both domestic and from neighboring countries, began competing for political power. This led to a dangerous, deadly climate for most Congolese, and resulted in two violent, bloody wars.

With the instability, various rebel groups tried to recruit Majaliwa to join their forces. He says it was a choice of either joining them or being killed. Fearing for his life, and the safety of his family, Majaliwa made the decision in 2003 to flee the Congo, and seek a new life somewhere else. By the time he fled, he was married to only one of his wives; the other had remarried. He left the Congo with his wife, Jullienne, and their only son at the time, who was 3 years old.

Majaliwa will never forget the day he said goodbye to his other three children.

â€œIt was very, very bad,â€ he says. â€œYou know your kids, your blood, we call it your blood, and to leave them, you donâ€™t know how long youâ€™ll be separated with them.â€

Majaliwa recounts that he said goodbye to his children one night, and by morning, he, his wife, and his son embarked on a four day trek through Tanzania and Uganda, eventually arriving at the Kakuma refugee camp in Kenya. While in the camp, Jullienne gave birth to another son, who is now 6 years old.

While his older son attended school in the camp, Majaliwa sought certification to work with HIV/AIDS patients in the community. It took two years to complete. â€œI loved my work,â€ he says.

Life and conditions in the camp were not easy. He recalls frequent dust storms, which made it difficult to breathe. Food was scarce. â€œYou get food for one week and that food for one week is not enough for one week. It can take three or four days,â€ Majaliwa says. â€œThe other three days you need to fight to get something to eat.â€

Though safe from the violence of rebel forces, Majaliwa was still hoping for something better than the camp.

â€œLife was not good, too bad for us. Â Living like that…â€ he trails off. Â â€œThere is nowhere else to go.â€ 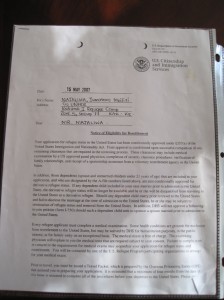 After three years in the camp, Majaliwa received a letter that changed his life. â€œWhen I got the letter that I was approved to come in USA, I was very, very excited and very happy,â€ he says. â€œIt is a document that I will never forget.â€

Upon arrival in the U.S., Majaliwa and his family were greeted by RefugeeOne resettlement case workers and taken to their new apartment in Chicago. He has a vivid memory of the first day here. â€œI saw a big city than our city. It was like a change,â€ he recalls. â€œIâ€™m coming from the dark into the light.â€

While his two sons attended public school, Majaliwa enrolled in English as a Second Language classes at Truman College so that he could apply for a job and more easily assimilate. He says that the language barrier, along with the weather, were the two most difficult parts of acclimating to life in Chicago. Otherwise, he says, the transition has been smooth. â€œI traveled before, so I was used to being in new places,â€ he says.

Once the short-term government funding ran out, Majaliwa and his family moved out of temporary housing and into their own apartment in Edgewater, a neighborhood on Chicagoâ€™s north side. Working at the Blackstone Hotel to provide for his family, Majaliwa is hopeful that his children will amount to more than he was able to. He tells his sons every day how important it is for them to stay in school and get a good education.

Majaliwa has other family affairs to attend to.

Shortly after resettling in 2007, Majaliwa was able to track down his other children at a camp in Tanzania. By the time he was able to contact them, they had been there without either of their parents for nearly three years. He remembers the day they connected.

â€œIt was the first time to hear the voice of the kids. I was crying, they donâ€™t know where I am,â€ he says. â€œNow Iâ€™m in the USA and I will fight to bring [them] over here.â€

Their reunion is imminent. They children have already been approved for resettlement in Chicago. They are awaiting their visa interviews and airfare. â€œToday we was talking. They was telling me they have pressure in their hearts, they need to come,â€ he says. â€œI told them to wait. Itâ€™s a process.â€

Though he recognizes it will take some time, Majaliwa is anxious to be reunited with his children. â€œWhen I see them, it will be a great joy, a happiness back in my life,â€ he says. â€œI will never forget that day.â€