[Read the companion story: What’s the difference between refugees and other immigrants, and how are those differences reflected in policy and practice in the U.S.?]

Ever since he was resettled in Chicago in 2007, Poe Clee has been focused on one thing: leaving the U.S. to help his people. He remembers an exchange that occurred on a train in Thailand while he was visiting his former refugee camp several years ago. The scene is a constant reminder of his mission.

While riding the train, Poe Clee watched the police approach a woman and ask to see her identification. She was a refugee and did not have any documentation. As he observed the conversation, Poe Clee thought of the ID tucked away in his pocket and remembered what it was like to live without one before resettlement.

He listened as the woman tried to explain in Karen that she was returning from the hospital. She tried to tell them she was sick, but the police could not understand her story and asked her to get off. Poe Clee stepped forward and spoke for the woman in English. The police backed away from the scene, letting the woman continue on the train.

“If I were not from the U.S., I would probably not have been able to speak for the woman, I would have been afraid to,” Poe Clee says. “I see myself as one spokesperson for people who can’t speak.”

Memories like this one inspire Poe Clee to return home to speak for his people. Immediately before coming to Chicago, he lived in Mae La refugee camp in Thailand with his family after escaping the civil war in Burma. Currently, Poe Clee is a junior at North Park University in Chicago where he is gathering the skills he needs to help his people.

“I would describe my life here as a process of preparing myself to do work for others,” he says. “I don’t see myself to settle down and be here forever.”

On first impression, 26-year-old Poe Clee looks like any other college student. His black hair is cut short and he wears a navy blue sweatshirt with the name of his school written across the front in yellow letters. He often works on his computer at the Common Cup; a coffee shop in Rogers Park located a few blocks away from the apartment he shares with some friends.

His complaints sound typical of any college student. He is frustrated with Spanish class, he has a paper to write for his political science course and he has to drink several cups of coffee while he works to keep from falling asleep. The normalcy is deceiving.

Unlike most other college kids, Poe Clee grew up in refugee camps. He was born in the Karen state in Burma. When the Burmese army attacked his village in 1990, Poe Clee and his family fled to Thailand to seek refuge.

Poe Clee and his family lived in four different refugee camps. He spent the most time in Mae La, the final camp he lived in with his parents and four brothers. After completing high school in the camp, he took leadership and management courses and tried to contribute to the community.

“We were very active in doing community organizing. We would organize activities for other youths who have given up their hopes,” he says.

In 2007, he heard on the radio that the U.S. was accepting applications for resettlement. Poe Clee was accepted along with two of his brothers and his parents. When he heard the news he was excited, but he was also nervous about leaving, particularly because his two older brothers’ applications were not accepted.

“There was some conversation in our family about whether we should be resettled or not,” Poe Clee remembers. “We lived there for 20 years and we haven’t seen any progress in our lives so we all finally decided to come to the United States.” 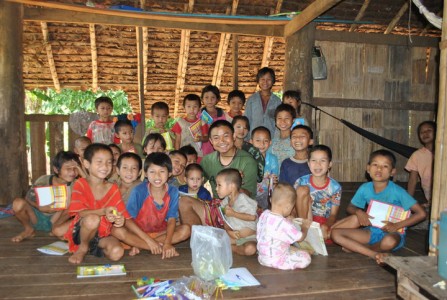 Poe Clee returned to the Karen State earlier this year to bring school supplies to children who are Internally Displaced Persons.

One of his older brothers moved to the U.S. first to live in Chicago. Poe Clee came next, and his parents and younger brother followed. In July of 2007, he boarded an airplane for the first time in his life and flew to LAX before proceeding on to Chicago.

Once in Chicago, though, Poe Clee was unlike most other refugees. He greeted Nina Music, his caseworker and his first American friend, with decent English he’d learned in the camps. That alone was uncommon for most refugees.

From there, Poe Clee was hired by several resettlement organizations to be a translator. Even with his English skills, the transition to life in the U.S. was difficult for the first year. Poe Clee worked a night job while attending Truman Community College. He often felt homesick and he caught pneumonia during his first Chicago winter.

He remembers a period when he only slept for about four hours every night, but, even then, he still found time to help his community.

“When I do community work, I volunteer my time so I’m not expecting anything. I personally want to see people share their lives with one another,” he says. “We are a very tiny community in the city, we have to be very well connected. We have to help each other.”

Poe Clee helped the Burmese refugee community in Chicago by accompanying people to doctors’ appointments, picking up prescriptions from Walgreens and meeting with teachers at school.

He remembers attending a conference at Swift Elementary School and learning one of the young boys he worked with was improving in his classes. Accomplishments like that one aren’t just significant for individuals; they are significant for the entire community, according to Poe Clee.

Now, Poe Clee continues to work part time as a community organizer while attending school. He transferred to North Park University with the help of an administrator who attends his church. He has spoken about refugee life at conferences in Washington D.C. and San Francisco. It has been three years since he arrived in the U.S.and successes like the one at Swift Elementary are becoming more common.

“We spend our day and night time helping people, and, in the meantime, helping ourselves. Now, three years [later], we see progress. People buy cars, go to work. Some of them have improved in skills,” he says.

Unlike many of the refugees he helps, though, Poe Clee’s resettlement in the U.S. is not his final destination. Instead, it is a temporary stop.

He plans on helping his people by returning to Thailand after attending and graduating from law school in the U.S. His two brothers plan to stay here. He is not sure what his role will be in the process, but he wants to contribute to the movement to bring peace to Burma.

“What we are looking for is freedom and democracy and peace in our home country,” he says. “I just want to be part of the groups who help transform the country.”

The process will be a long one, he recognizes but he is committed to it. After about 60 years of civil war, many of the refugees Poe Clee works with have lost hope in a peaceful future in Burma. He remains optimistic. Despite the life he has created for himself, he still does not consider the U.S. to be his home.

Burma will always be home.

For now, Poe Clee is spending his time gathering the tools he needs to help his people. Since landing in Chicago, he has learned about the U.S. political and social systems. He has made some good friends here, and he has built relationships with Burmese youth.

In some ways, he has changed since coming to the U.S. He dresses differently, he isn’t as thin as when he first arrived and he has swapped out his old radio stations for NPR. Even though he carries an ID in his pocket when he returns to Thailand, he still feels like the same person he was when he lived in the Mae La refugee camp.