Eugene Peba: A Nigerian’s fight for survival and protection

[Read the companion story: What is the legal status of asylees coming into the U.S., and how does that evolve as they remain?]

The aroma of goat meat permeates the room. Though itâ€™s simmering on the kitchen stove in Eugene Pebaâ€™s small Chicago apartment, it helps him return to his roots, reminding Peba of his life back in Nigeria. His voice, infused with energy, echoes throughout the apartment, interrupted by the hum of the stove and the quiet whimpers of his dog who lies on the floor nearby. Sitting at the glass kitchen table, Peba reflects upon his time in the United States after leaving Nigeria in 2005.

Born in Nigeria on June 26, 1985, Peba grew up as a member of the Ogoni Tribe, an indigenous group in southern Nigeria that endured years of persecution. The Ogoni people have continually suffered from the degradation of their lands by the Shell Oil Company since petroleum was discovered in the late 1950s. Human rights violations, including marginalization, and lack of access to social services resulted, according to the Bill of Rights of the Movement for the Survival of the Ogoni People (MOSOP), leaving many injured or dead, and thousands displaced as a result of ensuing violence.

Although the struggle escalated in the early 1990s, unity efforts began in 1993, with the first celebration of Ogoni Day, an event Eugene describes as an opportunity for Ogoni people to remember â€œthis is what we stand for, this is who we are, this is where we are goingâ€ even in the face of adversity.

PebaÂ reflects onÂ an inspiring speech of the Ogoni future by Ken Saro-Wiwa, formerly spokesperson and president of MOSOP.

Eugene remembers the strength of family values and how his parents guided his childhood.

â€œI was born into a perfect family because my father and mom made the best for us. They donâ€™t want to us to be like other kids,â€ Peba says. â€œMy father always aspires for us to do much better than he does.â€

A self-described curious child, Peba would often listen to his parentsâ€™ conversations rather than go outside to play like most children did. He quickly grew interested in government affairs and slowly absorbed information about the situation affecting the Ogoni people. He positioned himself outside the door to eavesdrop as his parents and friends talked politics.

“The most unique thing about my time with my father is, when I was a little kid, I think from seven years old, I [did] more than listening,â€ Peba says.

In 1993, Peba overheard a conversation that changed the direction of his life forever. His fatherâ€™s village was attacked, burning down his grandmotherâ€™s house.

â€œI keep reflecting on why, why would people attack a people? They try to make us feel inferior to other tribes,â€ Peba says.

Soon after the first attack, rumors spread throughout the village as fears of another incident grew. Those rumors came to life when shots rang out at Pebaâ€™s school, wounding one of his friends. Though Peba and his siblings returned home safely, his mother, who was not Ogoni, took them and escaped to her home village two days later. His father, however, had to remain behind. [audio:https://immigrantconnect.medill.northwestern.edu/wp-content/uploads/2010/12/EP-AUDIO_SchoolShooting.mp3]

Peba recalls the haunting experience of a school shootingÂ prompting his motherâ€™s decision to escape with him and his siblings. Although Peba reportedly sobbed the first time he shared his story, he is now able to tell it with a positive attitude, as a means of using his experiences as a lesson for others.

â€œIf I can save you guys, my name will continue,â€ Peba remembers his father saying.

Peba remembers the call to uphold his father’s legacy.

As the years passed, tensions intensified. Though the Ogoni tribe was willing to pay taxes to the Nigerian government, Ogonis wanted to control their resources independently, which lead to greater conflict. Experiencing the struggle of the Ogoni people firsthand, Peba began to get involved in youth movements by attending meetings and rallies.

Over time, Peba was beaten, a few times severely, for his activities. Though his aunt encouraged him to go to a refugee camp, Peba refused. â€œI was stubborn not to go to the camp because I was thinking about my fatherâ€™s legacy,â€ Peba says. After being beaten yet again, Peba realized his life was in danger and made up his mind to follow his auntâ€™s advice. 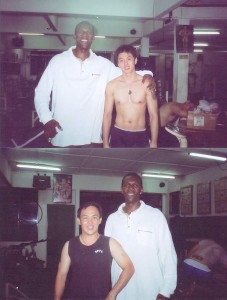 Peba works out with his friends during his brief time spent in Malaysia.

Arriving in a refugee camp in the Benin Republic in 2005, new dangers faced the then 19-year-old Nigerian. He worried it was unsafe, observing that many refugees betrayed one another. â€œI donâ€™t want to die right here. Itâ€™s better I die fighting,â€ Peba says, recalling the decision to escape to Malaysia after having stayed in the camp for three months.

After almost six months in Malaysia, Peba boarded a plane to Los Angeles, Calif., hoping to gain political asylum in the United States on the grounds of persecution in his home country.

â€œI thought I was running to save my life from back home, but here itâ€™s a different fight, a different ball game,â€ Peba says.

The road to achieving political asylum began on Nov. 28, 2005, when Pebaâ€™s flight landed. It took over two years before America became the â€œland of the freeâ€ that Peba had imagined.

â€œI rose my hand up and declared myself to the officer,â€ Peba says, remembering his arrival. He was shackled and placed up against a wall not long after exiting the plane.

Peba had arrived with a false passport, which he admitted to the officer. Only three hours later, he was taken to federal court. After a public defender was appointed for him, he was taken to a metropolitan detention center. There, Peba spent the first of many nights in a cold, cramped cell.

Peba was advised to plead guilty to having false documentation, as he pursued his asylum case. He did. Â â€œI strongly believed that the United States of America was going to give me the protection I deserved and thatâ€™s why I came all the way down here,â€ Peba says. â€œBut it was the opposite of what I thought.â€

Pebaâ€™s asylum case based on the fear of persecution was first denied by an immigration judge on the basis that Pebaâ€™s diary refuted the claims he made in court regarding his experience in Nigeria. Though Peba recorded actual occurrences in his diary, he also included what he imagined his future to be, dated similarly to the events he had lived through. The luggage containing his diary along with other documents was lost after authorities made copies of the originals, thus the evidence used against him was no longer in Pebaâ€™s possession.

â€œThe burden of proof was all upon me,â€ Peba says about his decision to appeal.

Without a lawyer and little knowledge of the law, Peba lost his appeal. He kept at it, doing research in the prison law library. â€œI wrote my case out on a piece of paper with a pencil,â€ Peba says. After being told about habeas corpus, Peba felt he had found a new hope.

Throughout his detainment, Peba spent time working in the detention centerâ€™s kitchen to distract himself from the reality of his sufferings. While he was working, on a day about two years after he was first detained, a deportation officer came to Peba. The officer told him that his filing of habeas corpus had been reviewed and that he had been granted a $5,000 bond.

â€œI didnâ€™t even wait for the next statement,â€ Peba says. â€œI jumped up and screamed. I didnâ€™t know how I was going to get the money to pay, but that joy, those words that came out of him, I was so relieved. That whole night I couldnâ€™t sleep.â€

After two weeks, with the help of his family in Africa as well as the Ogoni community in the United States, Peba was released.

â€œYou have this feeling that you are still kind of locked up. This same routine affecting your psychology,â€ he says, recalling his first days of freedom. â€œIt took time, but I finally believed that I was out. It was the first time I saw the United States with no shackles…and no uniform.â€

After his release, Peba took a bus to Memphis, Tenn., where he met his uncle, whom he would stay with for a month. â€œI was happy, but locked in my happiness,â€ says Peba, who felt it hard to be â€œfree with people at first.â€

â€œI knew I was innocent but I felt I would be classified as a bad guy,â€ he says. â€œThat emotion was always in my mind. I was stressing and canâ€™t really open up that much.â€

Still plagued by fresh memories of detainment, the incidents that once haunted him were not far away.

On Nov. 11, 2007, Peba took a greyhound bus to Chicago to visit Charles Wiwa, a friend and member of MOSOP.

With the comfort of newfound friends and opportunities, Peba decided to stay in Chicago. He got a job as a dishwasher for an African restaurant, and was soon promoted to manager. Peba chose to follow his love of science and medicine, which he pursued only briefly back in Nigeria. Peba left the restaurant business and got registered as a certified nursing assistant (CNA). He began working at Atrium Health Care Center, where he still works. Peba has been employee of the month twice in the year heâ€™s been there, and is extremely proud of his accomplishment.

Now married, Peba and his wife Nicole live a quiet life in their Chicago apartment with their dog and cat. Theyâ€™re looking to expand their family at some point, but, for now, Peba takes each day one step at a time. â€œItâ€™s still like a miracle that Iâ€™m in the United States,â€ he says.

Peba shares his story with Northwestern students and talks of the first time he met his wife, Nicole.

Peba still feels strongly tied to his home country and family. He remains involved with the Ogoni community in the United States and often relives the experiences from his past in his mind.

â€œIt will be real until I leave this world, no matter how long it takes. I pretend most times to disconnect from it, but I just canâ€™t describe what I grew up with. It is very hard to say okay, I am totally free, but you just have to control the feeling; the memories are there,â€ Peba says.

In October 2010, Peba received a phone call. His younger brother back in Nigeria had died. The nightmares flashed back. â€œI donâ€™t want to die with my story,â€ Peba says, â€œand thatâ€™s why my brotherâ€™s death hurts me a lot, because he passed through and they have no documents of what he passed through.â€

Though Peba sometimes wishes he could â€œturn back the hands of the clock,â€ he doesnâ€™t regret his struggles both in Nigeria and being detained in the United States. He remains positive.

â€œI want to be able to tell a story that will encourage someone in Asia, in the Middle East, in Africa, in the United States. I want to…strengthen someone that is about to give up. I want to tell a story that will make someone feel â€˜OK I can do it, I can be better,â€™â€ Peba says. â€œMaybe thatâ€™s the reason Iâ€™m alive, I donâ€™t know. Only God knows. And that will give me peace.â€