Mofak Hasan: An Iraqi refugee totes his teaching across continents

Mofak Hasan values education above almost all else. He holds a piece of carved and polished wood adorned in Arabic script and an Iraqi flag, and fondly remembers the group of Iraqi students he taught more than twenty years ago who gave it to him so that he would not forget his home.

â€œIâ€™ve got plenty of things, but these things, it is so important for me,â€ Hasan says in his living room on the west side of Chicago. â€œNot only to remember my country, but to remember my students that I taught.â€

He recognizes, â€œI am an old man, I know, and they are young.Â  But there is a link between us.â€ 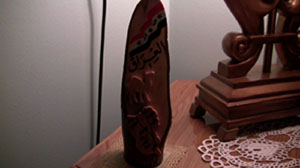 The link has kept him vital as a university professor of mathematics and computer science as he and his family moved to Libya, Yemen, and Jordan after they fled Iraq in 1998.

Hasan never foresaw leaving Iraq; then again, he never anticipated being a professor either.

â€œI applied to be an officer in the military [after graduating high school in 1973] to be honest, because I was going to get a good salary, a new car, land,â€ he recalls. â€œThese things are fantastic, so I said there is no need for me to complete my study, I will join.â€

He laughs now at how unpredictable life can be.

â€œUnfortunately I failed the medical test.Â  My nose, it is still the difficulty with me,â€ Hasan says. â€œThey said you have to go a do a surgical operation and go back [to enlist]. But I havenâ€™t got plenty of time to return back, so I apply to the university.â€

He didnâ€™t take to it initially.

His studies halted when war broke out between Iraq and Iran in 1980. The military service he was denied after high school became mandatory. He served four years.

â€œIt is not mathematics. It is not computer science. It is a matter of war, Hasan says. â€œI just get an order and fight.â€

Again, military decisions pointed him in the direction of school. Â During his service, he applied to university and enrolled as a soldier.Â  When he got out of the army, a scholarship was awaiting him to study for his PhD. in the United Kingdom.

â€œThat was my destination,â€ Hasan recalls. â€œNot to finish only the war, not to finish the service, not to get married. To get a higher degree. And I got it.â€


[Hassan recounts his story about fighting in Saddam Husseinâ€™s army.]

By 1998, Hasan had a wife, six sons and a teaching career that defined him. Yet, there was war again. Relations with the U.S. had worsened. Desert Storm in which the U.S. executed a four-day bombing attack on Iraq in December was just around the corner. With forged passports, Hasan and his family left Iraq illegally and traveled to Turkey and Cyprus before settling in Libya, where Hasan worked as a professor.

Less than a year later, Hasan and his family were on the move again, this time to the south of Yemen, and four months later to Yemenâ€™s capital city, Sanaa, where Hasan heard there were better university jobs.

â€œI got a salary,â€ Hasan recalls, â€œpushing my life as well as family life forward.â€

â€œFrom 70 or 76 students up to 1,500 students with a lot of labs,â€ Hasan remarks. â€œI am glad to say that I, along with my colleagues, built up a university in the south of Jordan.â€

Still Hasan and his family were not entirely comfortable in Jordan.

â€œJordan was a country that didnâ€™t like to give immigration,â€ he says. â€œThis was a difficulty for us.â€

The struggle to acquire Jordanian citizenship is one reason that Hasan applied to resettle as a refugee in the United States. When his application was eventually approved and the family prepared to leave Jordan for the U.S., his coworkers and students organized a party in his honor.

â€œThey gave me a very nice film about my life,â€ Hasan remembers.Â  â€œIt was not a small party, it was a very big party, and they showed that film. Believe me, I started crying when they showed it.â€

[Hasan describes the experiences of Iraqi refugees in Jordan.]

When Hasan arrived in Chicago last spring, he started his teaching career from scratch. Finding a teaching job as a refugee with no experience in the United States, especially at a time when jobs are scarce, was not easy. Hasan applied for positions at universities first. When he received no response, he began to apply to high schools.Â  It wasnâ€™t ideal, he says, but getting a job was the most important thing, and he felt he could work his way up over time, as he had before in the Middle East.

Hasan did not have to wait long. By the beginning of this school year, he had secured a position as an adjunct faculty member in the Department of Mathematics at DePaul University.

His goal now is to find a permanent teaching job at a university in Chicago. He has begun research work.

The education of his children is a priority. He sees it as essential in their integration into American life.

â€œFor the first day for them attending the school,â€ he says, â€œI told all members of my family, â€˜now the life is starting because they joined the school.â€™â€

[Hasan describes his difficulties in obtaining an American driverâ€™s license and the lessons he has learned in the process.]

As Hasan sits comfortably in the living room of his Chicago apartment, he talks of the importance of education; in building friendships, in developing an understanding of other people, in making something of oneself.

He picks up the carved wood memento his Iraqi students gave him 20 years ago. He hopes to form as strong a bond with his students here too.

â€œYou know, at the beginning, my feeling was difficulty to teach those students because someone is putting his leg on the chair, the other reading newspaper, and the other playing with their laptop, and the other got chewing gum,â€ he observes.

But Hasan has noticed a change.

â€œBelieve me, if you visit within the last lectures, you will see they are very quiet. â€œ

Hasan recalls earlier that day.Â  Heâ€™d given an exam, and it was the last class period before Thanksgiving break.