Damodhar Dhakal: Finding the time to adjust in the States

Dhakal talks about his dream of teaching in the U.S. as he did in a refugee camp in Nepal.

[Read the companion story What issues are involved in educating the children of refugees?]

Damodhar Dhakal, 30, took his first plane ride less than two years ago. Clueless to the physics behind airplanes, he says he was scared during the flight from Nepal to Chicago. However, once he landed at Oâ€™Hare International Airport, his fear was lifted.

â€œI feel very happy when I landed the first time in airport,â€ Dhakal says. â€œI see there is beautiful scenery surrounding here and a lot of people.â€

Dhakal isnâ€™t like most travelers. He came to the United States in March 2009 not just with one carry-on and a suitcase, but with his whole life. Dhakal is a refugee.

When Dhakal was 4 years old, he was displaced from Bhutan with his family and moved to a refugee camp in Nepal. After years of living in the refugee camp, he is now living in Chicago with his wife and two young daughters, Yamuna and Saniya. He now works at the same place where he was introduced to his new lifeâ€”Oâ€™Hare. The Jamba Juice at Oâ€™Hare, to be exact. 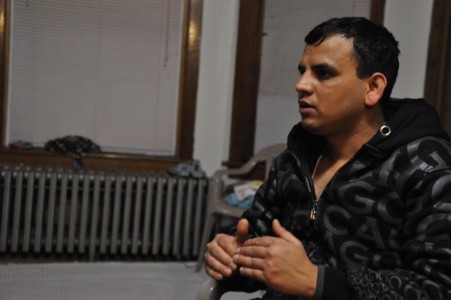 Dhakal in his apartment.

Dhakal lives in an apartment that comfortably fits his family of four now, but life wasnâ€™t always as free from hardship.

At the refugee camp in Nepal, they suffered much adversity. Many people died from disease caused by dust coming into their homes during the windy season. Others faced hardship when fires and floods destroyed their bamboo huts.

â€œVery sorrowfulâ€ is how Dhakal describes his time in the camp.

The refugees werenâ€™t given much independenceâ€”they werenâ€™t allowed to own any cattle or land.

â€œWe are like a parrot or pigeon in a cage,â€ Dhakal says. â€œWe are in a prison.â€

Still, about five days a week, he wakes up at 3 a.m. and navigates Chicago public transportation for about two hours to make it to his shift at Jamba Juice.

His hourly wage at the smoothie shop also adds difficulties to his new life. Â Making $8.50 an hour, he struggles to cover his familyâ€™s expenses.

â€œItâ€™s insufficient,â€ Dhakal says. â€œIt’s very hard for me to pay the rent, the electricity, the gas.â€

To make ends meet, he works as much as possible at Jamba Juice, totaling about 40 hours a week. Â Unused to the American pace, heâ€™s having difficulty with the little time he has left for himself and his family. Since his wife works at a dry cleaner nearby, his mother-in-law takes care of Yamuna and Saniya most of the time.

â€œIf we have time then we can give it to our baby, but you know, I am busy with a job, and we donâ€™t have time to give,â€ he says. Dhakal is also sacrificing his desire to pursue teachingâ€”at least for now.

Dhakal taught Bhutanese children at the refugee camp in Nepal on a volunteer basis. He came to the United States hoping that he could continue teaching, but multiple obstacles have disrupted his plan.

Because of Dhakalâ€™s job, he doesnâ€™t have time to receive the proper schooling required to teach. Financial restraints prevent him from going to college.

â€œI am very eager to go to school,â€ Dhakal says, â€œbut if I do not work, then there is no one to pay the rent, electricity, gas and everything and to carry out the whole household activity.â€

Dhakal still hopes to pursue his dream. â€œI want to serve the community,â€ Dhakal says. â€œMy basic goal is to become a teacher.â€ He tries to learn as much as he can in the spare time he has. 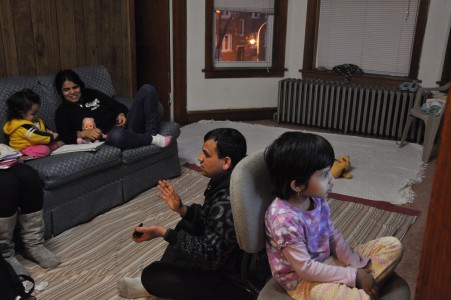 The Dhakal family in their apartment.

The Dhakals have a desktop computer in their home, and while Dhakal says he is not yet internet-savvy, the family utilizes the resource to the best of their ability. Dhakal says he sometimes looks up words on dictionary.com, while his daughter, Yamuna, prefers to browse YouTube for entertaining videos.

For Dhakal, widening his mind includes learning more about his new home. Dhakal thinks it is important to know about the history of the place you inhabit, and he tries to expand his knowledge of the United States by reading books. Heâ€™s interested in learning more languages. He learned how to speak English when he came to the United States, and he can hold a steady conversation in the language. He realizes thereâ€™s so much more to learn.

â€œIf I work in the school, I would definitely develop more skill and ability,â€ Dhakal says. â€œThey will increase vocabulary and knowledge and everything.â€

Heâ€™s openly grateful for the chance he and his family had to leave the refugee camp.Â  His mother, father and other siblings are still waiting to be resettled to the United States.

â€œIâ€™m very happy here because here is peace,â€ Dhakal says, comparing the violence in the refugee camp to his experience in America. â€œHere, I like it. Iâ€™m very happy.â€