Al Salih reflects on life as a refugee, always caught in the middle

[Read the companion story: Is the U.S. government the only agency to provide funding and other support for refugees? Who else is involved and what do they typically provide?]

Qusay Al Salih is three times a refugee. Like most refugees, he fled his home because of war that so often displaces those who have little to do with the actual fight. But unlike many of the worldâ€™s refugees, Al Salih has never seen the country he believes he should call his own.

Al Salihâ€™s grandparents fled Palestine for Iraq during the 1948 Arab-Israeli War. For the next two generations, the family lived in Baghdad, where Al Salih grew up. He left school early to work as a delivery driver to support his ailing mother after his father left.

In December 2006, he and his wife, Lubna Abu Khadeeja, took their two small children and fled their home in Baghdad, thrusting the family into refugee status once again. They had been receiving death threats from anti-Palestinian groups, and were convinced that they were not safe at home. 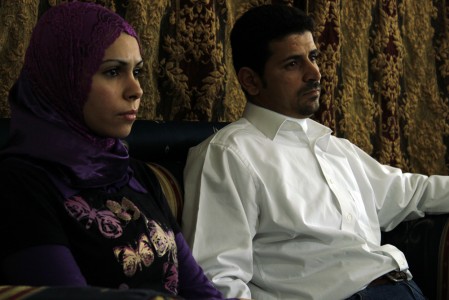 Qusay Al Salih sits in his Oak Lawn, Ill. apartment with his wife, Lubna Abu Khadeeja. The couple came to Chicago with their two children in March after four years in a refugee camp in Iraq. (Photo by Kaitlyn Jakola)

â€œThe first week was horrible for them,â€ Al Salih says of Nawal and Omar, now 9 and 6. â€œTheyâ€™d been crying all the timeâ€¦depressed, stressed. The future was blind.â€

The family became part of the street scene.Â Men were sleeping in cars and women in nearby mosques. Women wore their headscarves all the time in case of attack, and men struggled to contact anyone who might help them. They were largely unsuccessful.

â€œWe had hope somebody would come and take [us] somewhere safe. That was our dream,â€ Al Salih says. â€œWe canâ€™t even describe how painful it was to live with nothing, just outside.â€

On Dec. 9, 2006, with little more than a few Red Cross tents, Al Salih and 40 other refugees from Baghdad started Al-Waleed camp. The makeshift camp on the Iraq-Syria border became home to mostly Palestinians, though Iraqi refugees lived there as well. For Al Salih, the camp was a place of constant fear.

â€œWe have a lot of memories, sad memories,â€ says Al Salih, who made a dangerous 110-mile trip to Syria every day to supply the camp with water. â€œItâ€™s not safe being in the campâ€¦it really deeply hurt us.â€

Frustrated, Al Salih and his fellow refugees decided to flee to Syria. If they could no longer live safely in Iraq, they reasoned, surely their nearest neighbor would welcome them into safety. But their efforts to cross the border permanently failed. They were turned away.

â€œWhen we decided to cross the border to Syria, it wasnâ€™t a political decision,â€ Al Salih says. â€œIt was a human decision, because we wanted to be safe. They didnâ€™t let us in because weâ€™re Palestinianâ€¦we were refugees in the first place. We were running from death to death.â€ 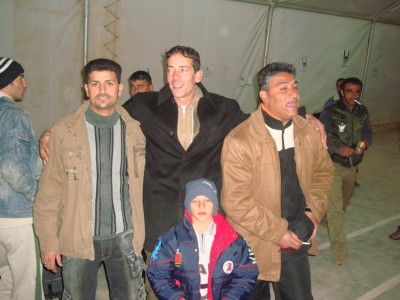 Al Salih still keeps in touch with his relatives and friends among the 70 families left in Al-Waleed. (Photo courtesy of Qusay Al Salih)

â€œI didnâ€™t believe I would come to America, the best country in the world,â€ Al Salih says. He had heard stories of refugees approved for relocation who never left their desert tents, and had seen several false starts in his own immigration. But in March 2010, he landed at Oâ€™Hare International Airport in Chicago, and started his third phase as a refugee.

The relocation process has not been easy for Al Salih. He has had three jobs in just nine months, changing from job to job in search of stable pay. He has also faced medical problemsâ€”a chest ailment that caused him to leave his job in a plastics factoryâ€”and struggled to pay his rent since his familyâ€™s second month in their apartment south of the city.

Al Salih recalls being told that refugee aid organizations would pay the rent for eight months. “Yet the second month here, we had to pay our own rent,â€ Al Salih says. â€œThe resources are not enough.â€

He and his family have had to â€œre-learnâ€ many aspects of everyday life, from grocery shopping to talking on the telephone. They rarely eat at restaurants for fear of unknown pork or wineâ€”forbidden by Islamâ€”in their meals, and worry about long-term things, like the economy, that never crossed their minds at Al-Waleed.

â€œIn the past, we never looked forward. We were living the situation day by day,â€ he says. â€œBut here, weâ€™re really worried for the economyâ€”if it gets worse, whatâ€™s going to happen to us, because we donâ€™t speak English.â€

They also face uncertainty when they think of their ancestors from Palestine. Al Salih says with a smile that he will remain a Palestinian â€œto death,â€ and that he would love to move to his ancestral homelands.

â€œWe donâ€™t have papers [to travel to Palestine],â€ he says, â€œbut we still have hope.â€

Until then, he says, they will be content to live and grow in the United States. In Iraq, Al Salih and his family lived in constant fear of attack based on their ancestry. In Chicago, they face periodic prejudice from those who donâ€™t understand their language or customs. 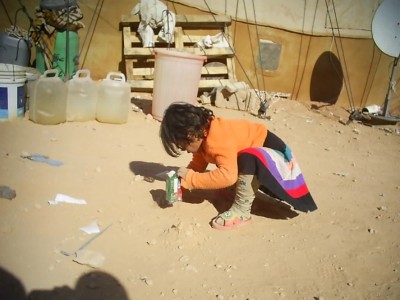 "The kids didn't have any toys and their parents were too scared to venture out on the highway to take them to the nearest school. They played with stones and sometimes reenacted the war among themselves." (Photo courtesy of Qusay Al Salih)

â€œIâ€™d rather be in a house with one person who hates me than in a country where everyone hates me,â€ he says.

So he and his family have hope for the future. His children, now attending school and taking ESL classes, dream of careers as public servants in their new country.

â€œWhen [Omar] was in the camp, he loved the American soldiers,â€ Al Salih says. â€œHe likes them because they saved his childhood. They saved the people there. Thatâ€™s why he feels safe. He wants to join the military, too.â€

Nawal hopes to be a doctor or a teacher, despite the lack of medical care and schooling she received for almost half her life. According to Al Salih, their hope persists because of the kindness and opportunity they have been offered since their arrival in Chicago.

â€œThis is the country of opportunities. If you have a chance to work, you can improve yourself, you can be something,â€ he says. â€œIâ€™ve always had hope, even though weâ€™ve struggled and had some problems in the pastâ€¦Iâ€™m looking for a brighter future.â€

In an ideal world, Al Salih says, that future would include his brother-in-law and niece, who were approved for relocation but have been told they cannot move to the U.S. until next year. For relocated refugees like Al Salih, the friends and family members they left behind cause them the most worry.

â€œTheir papers are ready, but they donâ€™t know why they havenâ€™t [been allowed to] come yet,â€ he says, adding that he would do anything to ensure their safe relocation. â€œItâ€™s really hard for us to leave our loved ones behind. I would sacrifice my life to bring my loved ones.â€