Shanti Niraula: The future is not there, itâ€™s here

[audio:https://immigrantconnect.medill.northwestern.edu/wp-content/uploads/2010/12/krislynheatherprofileaudio.mp3|titles=Learning English] Listen to Niraula describe what it has taken to adjust to the U.S.

[Read the companion story: How many refugees were allowed into the U.S. last year? From where? And how are those decisions made?]

In the living room of the Niraula familyâ€™s apartment off Devon Ave. Â in Chicago on a Friday afternoon, Shanti Niraulaâ€™s mother is in the kitchen cooking, filling the apartment with the scent of cilantro and Indian spices.

A baby named Shriniwas and a toddler named Nikesh are sitting on a rug in the living room, giggling and tossing a purple balloon back and forth as Shriniwasâ€™ grandmother coos his name. Niraula, who has just woken up from resting after a long nightâ€™s work, calls to Nikesh because itâ€™s time for him to go to his home on the floor below the Niraulas’. Niraula calls Nikesh his cousin. â€œWe Nepali, everyone is relative,â€ he says. 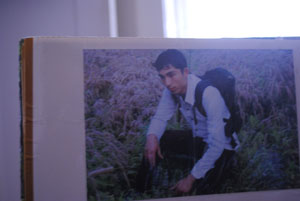 Niraula grew up in the camp. His younger brother and sister were born there. In February of 2010, they arrived in Chicago. Now he helps his parents support the family and takes on responsibilities that most American 20 year olds donâ€™t have. He works two jobs to pay for rent and food for his family and doesn’t hesitate to help the nearby Nepali community as he studies in the English as a Second Language Program (ESL) at Truman Community College.

The Niraula family– Shanti, his parents, grandmother and brother and sister– left Bhutan when the government made threats to burn down their house. Grandma carried him on her back. They lived in a refugee camp for 18 years, in a hut. UNHCR, the United Nations agency responsible for refugees, provided them with beans and rice. They played archery to pass the time. Niraula, his brother and sisterÂ  went to school and learned English there.Â Over the years, uncles, cousins in the camp were flowing into America. Soon it was their turn. In February, the process was finalized. With the help of RefugeeOne, they resettled in Chicago.

Eighteen years ago, when Niraula was 2, he spent four days on his grandmotherâ€™s back as she carried him from Bhutan to Nepal. Now the roles have reversed. At least once a month, his grandmother must visit the doctor, and it is Niraula’s responsibility to accompany her. This is a role with which he’s familiar; not only is he the only one who can communicate with the doctors, but he is, in many cases, the only one who can understand most peopleâ€™s problems. Niraula acts as a translator for his mother when they go to the store, advisor for his younger brother and sister and navigator for his father so he can get to work using public transportation.

Other Nepalis in the neighborhood also call on him for help, and he does not hesitate to oblige them. After all, they are considered his relatives.

â€œIâ€™m the firstborn, so I have a lot of responsibility,â€ Niraula says. â€œSometimes, itâ€™s life. I feel happy, doing what I do.â€

But he has to take time out for himself, too. He enjoys playing soccer and cards with his neighbors, watching wrestling on American TV and reading the RedEye, Chicago’s free daily newspaper. He dedicates much of his free time to school, and through his ESL classes, he’s becoming more comfortable with English. Still there are difficulties. 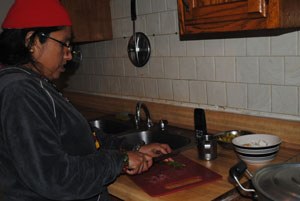 Niraula's mom cooks using ingredients from the markets on Devon

â€œJust to read a simple paper I feel really, really nervous and the teacher told me, â€˜Shanti, you repeat this class,â€™â€ he says. â€œRight now my English is quite better while I am just reading in the class.â€

His nerves might also come from the culture shock of being in an American school that is entirely different from what was offered in Nepal.

â€œThe system in Nepal of teaching and learning is really, really different. We study on the blackboard, but we donâ€™t have anything practical like computers and other things,â€ he says. â€œItâ€™s really difficult.â€

Outside of school, Niraula uses other ESL students, mostly of Mexican and Chinese origin, as resources to practice English; the shared language barrier forces them to use English to communicate. He also encourages his younger brother and sister, who are both in tenth grade, to use English as much as possible to accelerate their adjustment to a new way of life. He knows that perfecting English is the key to achieving his long-term goal of becoming an accountant, but finding time to study between the grueling hours that his two jobs demand is no easy task.

Three or four days a week he travels a significant distance on the El to Leoâ€™s Coney Island, a restaurant near Wrigley Field, where he buses tables, cooks, cleans and closes. The wages he earns help pay the familyâ€™s rent, but it comes at a personal cost.

â€œI carry lot of loads in Leoâ€™s Coney,â€ says Niraula, who has also been working at a Dunkinâ€™ Donuts 15 minutes from his apartment since late September. This job, which a friend recommended to him, is â€œreally easyâ€ and he feels a strong sense of belonging to the diverse community of employees and customers. â€œI know the tongue of the different people. They love me and they respect me.â€ 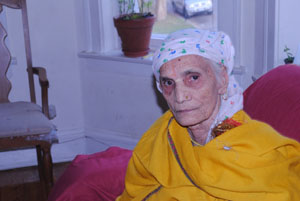 Shanti's grandma remembers the journey from Bhutan to Nepal well.

The welcoming communities that Niraula has found in Chicago have acted as buffers to the otherwise harsh realities of resettling in a foreign country. Looking at him, seated comfortably on the couch of his familyâ€™s Devon apartment with one arm draped around his grandmotherâ€™s frail shoulder, one might not suspect that he is holding the family together. The hours he spends working, attending ESL classes and helping his relatives and neighbors does not seem to dampen his disposition.

â€œHere? Everything is good. If I have a problem and I ask somebody, they help me. If I am lost on the way and if I want any money in my pocket and I ask help, somebody help me,â€ he says. â€œBut in my country, they help but they cannot think you as a good person if they help you also.â€

Despite the challenges associated with supporting a family of six, which most 20 year olds will not face for several years, Niraula would not trade his American life for what he had in Nepal.

â€œI miss it but I donâ€™t want to go there anymore. Iâ€™ll never go back,â€ he says. â€œThe future is not there, the future is here.â€