Thoung Shwe: A Burmese refugee with time to share

[Read the companion story How are refugees treated in other countries compared with the U.S.?]

When he opens the door to his modest apartment, 59-year-old Thoung Shwe is dressed to the nines in a crisp blue shirt and neatly pressed grey trousers. His stature is trim as his speech is terse: â€œCome. Sit.â€

His smile, however, speaks volumes of this refugeeâ€™s earnestness, his desire to share his story with someoneâ€”and judging from his effusive face, itâ€™s more for the sake of sharing than for the sake of the story.

Thoung Shwe hails from Burma (now Myanmar), a country where peopleâ€™s first and last names are indivisible yet civil war has rendered the country divided between the Burmese majority and the persecuted Karen ethnic minority, to which he belongs. Thoung Shwe resettled in Chicago in June 2009 from Noh Poe, a refugee camp in Thailand. He had been living in 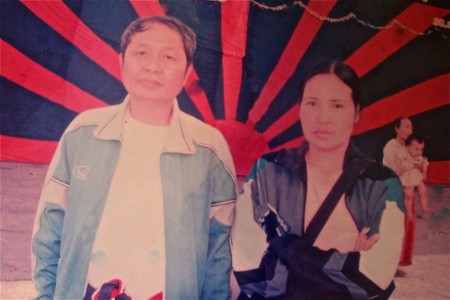 Thoung Shwe and his wife pose for a portrait. The blue and red motif in the background is part of the Karen ethnic flag. Photo courtesy of Thoung Shwe

Now, 16 months after arriving in the United States and eight months after beginning English language classes, the rest of Thoung Shweâ€™s story remains very much a mystery. The langauage barrier allows him only to affirm the facts that were already on paper; before resettling, Thoung Shwe worked for 15 years as a farmer, 15 years as a medic, and 17 years as a pastor, he confirms.

Here, he cannot find a job, although he badly wants one. To better prepare for working, he spends Monday through Thursday mornings taking Level 3 English classes at RefugeeOne (formerly Interfaith Refugee and Immigration Ministries), which he says is precisely a 30-minute bus ride from his home. He practices his English whenever he can, but most of the time it is through television shows and cartoons. He has a lot of free time, he says.

But he is undeniably glad to be here. â€œIn Burma, I donâ€™t like it,â€ Thoung Shwe says. â€œNo human rightsâ€¦ many people, soldiers, fighting.â€

And despite the climate shock he received upon arriving in June 2009â€”â€œWhen I come to Chicago, cold!â€â€”Thoung Shwe loves his new city.

â€œI like Chicago, big downtown. I donâ€™t like Minnesota,â€ he says. â€œNo English speaking; all mother language in St. Paulâ€¦ when I visit my son.â€

The light in his face shines even brighter. â€œTwo sons. Two grandsons.â€ He points to a lone photo hanging on the kitchen wall. â€œOne granddaughter here,â€ he says, motioning to the next room. Thoung Shweâ€™s other son lives here, too, he says, working in a meatpacking plant every day from 4 a.m. to 7 p.m. to support the family. Thoung Shwe takes a pen and writes his sonâ€™s name in perfectly formed English script: Lah Doh Htoo.

Lah Doh Htooâ€™s one-year-old daughterÂ  toddles into the room with her grandmother. Thoung Shweâ€™s smile grows wider and he shakes our hands as we stand up to leave.

A month later, we return, reluctantly bringing a fellow Karen refugee to translate for Thoung Shwe, a man who so vivaciously embraces the English language that he zealously shuns speaking his mother tongue in the United States. But that is almost all we know about him, and although this irony is regrettable, his story deserves better than to be lost in translation.

In the span of a month, his tousled salt-and-pepper hair has grown out slightly and his English has grown markedly more seasoned. He speaks mostly in English, easily describing his daily life, gliding in and out of his native Karen language as he describes more complicated aspects of his past.

Thoung Shwe was married in 1981 and had his first son in 1983. One year later, the family moved to the now-defunct Kwaykâ€™lo camp, where he worked as a medic. They joined thousands of Karen refugees fleeing Burma because of the civil war.

â€œMy country was very difficult. Poor,â€ he says. â€œWe always faced oppression from the Burmese regime. Â We did not have rights or freedom to do things. For instanceâ€¦ security is not guaranteed. You could be arrested for no reason.â€

In 1991, Thoung Shwe moved to the Mae La refugee camp to attend bible school. Upon obtaining a job as a pastor, for which he received a stipend equivalent to about $15 per month from the Seventh-day Adventists, he and his family were transferred to several different camps. They settled at the Noh Poe camp in 1993.

â€œI taught the bible study seven days a week,â€ he says. â€œI led the church. We had services every Thursday and Friday evening. In Noh Poe refugee camp, our members were 300-400.â€

Thoung Shwe applied for resettlement in 2005. In 2007, to his familyâ€™s delight, he learned they would be resettled in the United States.

â€œI chose the United States. Education is good,â€ he explains through the interpreter. â€œWe talked to our friends [who resettled] in Europe and they have a good social welfare system so that people go there and donâ€™t need to worry about workingâ€¦ they stay at home and receive assistance; some of them forget about working. Here in the United States you are expected to work. If I resettled to a different country, I would become lazy.â€ 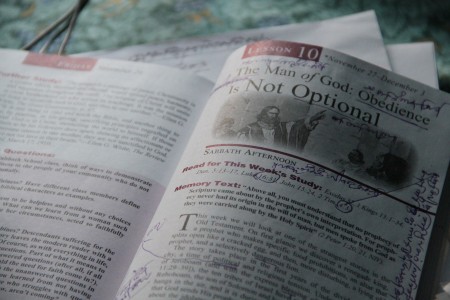 Thoung Shwe would like to continue working as a pastor, as he is still involved with the church, even going on trips out of state with his church group. But he is open to any available employment.

In another twist of irony, Thoung Shweâ€™s identification, social security card and other documents necessary to apply for employment were lost when his wife was mugged en route to the food stamp officeâ€”the one rare instance when the family dared to bring these important documents out of their home.

Thoung Shwe remains remarkably optimistic about the loss. Because the family had been in the country for a year at the time, they had already submitted their application for permanent residency and now simply await the arrival of their green cards.

Still, employment is a hot conversation topic among Thoung Shwe and his new friends from English class and church.

â€œWe talk about employment here,â€ he says. â€œFor those who have found jobs, itâ€™s okay. Itâ€™s hard for [the rest of] us to pay rentâ€¦ But we can always go to the [refugee resettlement] office and seek help.â€

Despite the hardships posed by a lack of employment and the ever-present language barrier, Thoung Shwe maintains he is happy to be here.

â€œThe hope is that my family will all be educated here,â€ he says. â€œWe hope to have a better lifeâ€¦ we will have permanent residence soon and we will become citizens of the United States. We now have a concrete solution for the future.â€

Upon review, the facts still didnâ€™t quite line up: Thoung Shwe and his family had transferred several times, but he had only named three refugee camps.

â€œOh, my camp was burned down,â€ he says nonchalantly.

He searches for the answers in his mind; they have clearly fallen to the very back. â€œIn 1996. It happened at midnight,â€ he recalls. â€œWe were just running.â€

In 1994, a group of Karen ethnic people split off and joined forces with the Burmese army that had been persecuting them. They began attacking refugee camps on the Thai border, burning several to the ground.

After Thoung Shweâ€™s camp was destroyed, he transferred to a camp farther from the border. â€œSafer,â€ he says.

Yet it seems Thoung Shweâ€™s impression of safety in the refugee camp lies in the realm of a very different reality than that in the United States. His mention of his campâ€™s destruction is a mere afterthought, only extracted with proddingâ€”not a driving force of his own story.

The memories that define him, however, are readily shared. 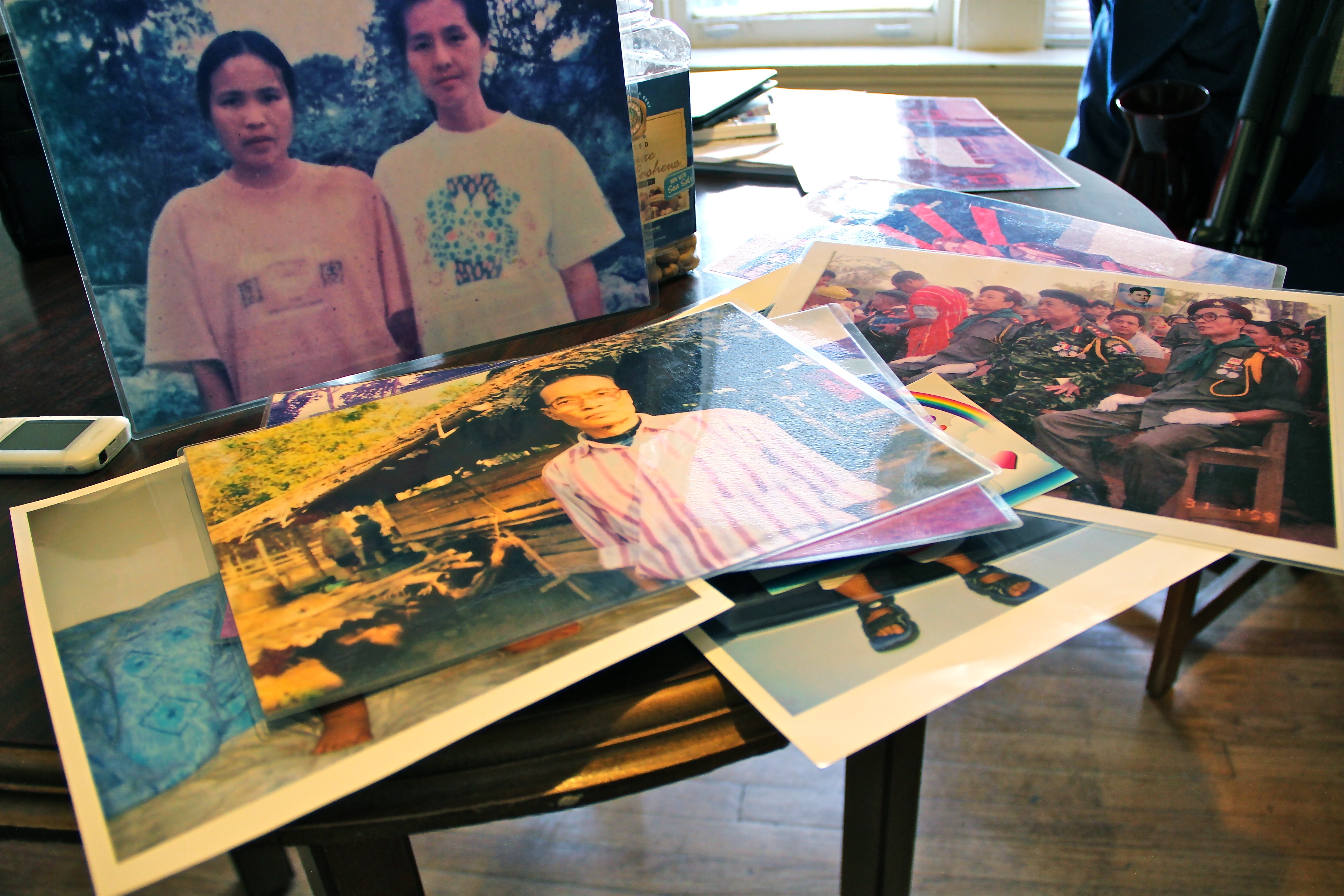 Photos from Thoung Shwe's past lay littered across the kitchen table. / Photo by Corinne Chin

Without waiting for an answer, he pulls out suitcases of Karen ethnic apparel. He holds each piece up to the light filtering through the single window before folding and stacking the clothing on chairs, like rainbow-colored building blocks. His wife selects two shirts, offering them as gifts.

Thoung Shwe brings out another photo album. It is filled with pictures of his niece, who is about to resettle in the United States. â€œShe is 26 years old,â€ he says with a glint in his eyes. â€œDo you like?â€

He pulls bibles in Karen, Burmese and English, the margins rife with notes in perfect penmanship. He flips through his English textbooks and workbooks, page upon page overflowing with seamless script. He plays jumpy DVDs of his Seventh-day Adventist church services in the refugee camp: children sing English hymns to a congregation seated in bright plastic chairs.

In the darkness of his Chicago living room, Thoung Shwe silently watches himself on the television screen: standing in the back of the Noh Poe service, wearing the same crisp blue shirt, grey pants and serene smile as when he first opened the door to his humble apartment.