The journey back for young Pakistani Americans 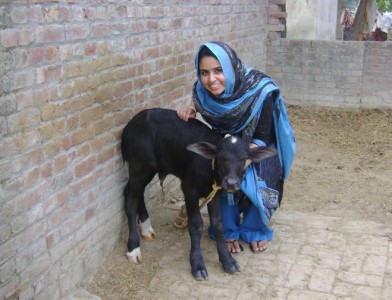 Noreen Nasir poses with a baby buffalo at her family farm in Pindi Minhassa, Punjab.

â€œEvery little simple thing turns out into a huge task, everything is so complicated!â€ Noreen Nasir frustratedly explains. â€œItâ€™s very hard to handle, and you want to pull your hair out…but thatâ€™s real life, you come back here and it doesnâ€™t feel right almost.â€

Nasir, 21, describes how frustrating it was at times living and working in Pakistan independently as a first generation Pakistani-American. She had recently spent her sixth visit to Pakistan, this time interning at Express 24/7, Pakistanâ€™s only 24-hour English News channel.

Her prior visits to Pakistan involved weddings, shopping, or spending time with her family on her uncleâ€™s farm where her father grew up. But this time, she wanted to experience Pakistan as a typical working Pakistani.

â€œI wanted to have a more productive summer, instead of a vacation,” she says. “The media industry in Pakistan is booming. Itâ€™s very competitive.”

Working at a Pakistani news channel catering to an international audience meant an opportunity to shed light on issues that needed more coverage in the world but were not getting enough attention, she says, especially Pakistanâ€™s stance on ongoing international affairs.

â€œI was focusing on international news that applies to Pakistan, though I did have one package piece focusing on the waste management system in Lahore,â€ she explains.

Though most of her time was spent at work, she feels this experience gave her a new perspective on her extended family in Pakistan.

â€œThey didnâ€™t have cars or AC, but you got used to it,” she says.” [They were] really unapologetic about their lifestyle and the way that they live, thatâ€™s what made me love it more.”

For Nasir, Pakistan isnâ€™t just a news segment that she can turn on and off. It is her â€œhappy placeâ€ tied with her familyâ€™s history, heritage, and culture.

â€œWhen I go back I feel a very deep connection,” she says. “The experience really helped me learn patience and see a different side of Pakistan.”

According to Jawad Hussain from the Pakistani Consulate in Chicago, over 3,500 visas were granted to Pakistani expatriates in 2009 from Chicago alone. That number is increasing. Many cite attending weddings, visiting family, or tourism as their main travel reasons.

However, due to racial tensions post 9/11 and the recent financial crisis, a growing number of expats and their children have moved back to Pakistan, most temporarily, for educational or work purposes.

â€œIt was cheaper and an easier option. It was like a short cut. Plus I already knew the language and culture,â€ he says.

He lived in Pakistan for only one year before deciding to transfer to a medical school in the Caribbean. He describes his experience as one marred with instances of extensive abuse of power, blurring of cultural and religious boundaries, and an obsession with rigid social roles.

He feels there was a double-standard in the way that American or foreign Pakistanis were treated. Many times he would be graded at a higher standard than his Pakistani classmates simply because he was an American, he feels. During evaluations he would receive the most criticism, the worst grades, and face impatient professors not willing to answer his questions.

He thought perhaps he could find some solace in building better relationships with his classmates. But he soon realized that he had “no interest in making insincere friends.”

â€œMaybe they think that I just came there to reap the benefits and I will leave and theyâ€™re jealous that they canâ€™t leave,â€ he postulates.

Attending medical school was not his first negative experience of Pakistan. On his initial visit, at the age of ten, he had reacted negatively to the cultural reverence for lighter-skinned individuals.

â€œThey used to call me â€˜little princeâ€™, I was much lighter then. I liked it, until I realized it was more mentally about power, like feudal power. They liked me more cause I was fair and an American,â€ he says.

When asked why she felt obligated to work towards bettering Pakistan, Nasir says that even though she felt like an outsider at times because she wasnâ€™t born or raised in Pakistan, she still felt equally Pakistani.

â€œIâ€™m very, very passionate about Pakistan and Pakistanis in general. I love Pakistan. I love going to Pakistan. I think a lot of that has to do with the fact that I have a lot of my family there,â€ she says.

Outside of her immediate household, the majority of her family members still reside in Pakistan. For her, identifying as a Pakistani doesn’t take away from her American identity.

As a journalism student and avid news reader, Nasir finds herself struggling post 9/11 to balance both her identities. She feels as if she is â€œin limbo in both places.â€ But mostly, she feels frustrated with the image of â€œrampant terrorismâ€ that Pakistan is associated with in the media.

â€œThe media focus today makes it hard for people to be open about their heritage, especially if youâ€™re from a place like Pakistan,â€ she says. "Express Night Out" had labeled Faisal Shazad as "Made in Pakistan."

After the failed car bombing at New York Cityâ€™s Times Square by Faisal Shazad, a Pakistani-American, she recalls feeling insecure in her identity once while taking the metro to work. She sat across a man reading the paper, and as he shifted the pages, she suddenly realized that the front page had a blown up picture of Shazad accompanied with huge text that read, â€œMade in Pakistan.â€

â€œIt was shocking to me and I immediately felt uncomfortable because I knew this was weird. I wondered if people were looking at me, because I am Pakistani and they could probably connect the two,â€ she confesses.

In spite of her trepidation over the image of Pakistan in American, she still believes the problem doesnâ€™t lay in the people of Pakistan but the mediaâ€™s demonizing obsession with terrorism.

â€œSo long as the world is occupied with terrorism, those issues [of corruption, poverty, lack of education and health and sanitation] will never get talked about,” she notes. “But once those issues are addressed, terrorism will get fixed on its own because I think terrorism stems from it.”

Globally, the Pakistani diaspora includes over 7 million people, approximately 700,000 of whom reside in the United States like Nasir and Chaudry. Within the U.S., roughly 11% are under 18 years of age, while the clear majority, almost 75%, are of working age.

There are several organizations in America that aid in reconciling the hyphenated identity of a Pakistani-American. One such organization is the Pakistani American Association of North America (PAANA).

PAANA member and Pakistani psychiatrist, Dr. Aqeel Khan, claims there is a strong correlation between an individual’s self-identity labeling and the amount of investment that individual puts into that identity or label.

â€œIf a child feels psychologically and emotionally safe enough to call himself Pakistani despite never having lived in Pakistan, then their outlook on Pakistan will vary,” he says. “This doesnâ€™t mean a lack of criticism, but a better understanding to â€˜fixâ€™ these irregularities (what they see wrong with Pakistan) rather than â€˜denounceâ€™ them all together.”

For Chaudry, fixing Pakistanâ€™s problems is a very lofty aspiration. He believes that the condition in Pakistan is â€œstagnantâ€ and that you canâ€™t â€œpurify dirt.â€

In fact, Chaudry seesÂ  no merit in a hyphenated identity of a Pakistani-American. He prefers being called an American, no hyphens necessary.

â€œMy parents are Pakistani, Iâ€™m American. Actually, there is no concept of one Pakistan,” he says. “If anything, I would rather be called Punjabi over Pakistani. At least that means something.”

His concern over the thin line exhibited between culture and religion within the Pakistani community prompts him to drop the Pakistani label all together and accept the more all-encompassing label of Muslim.

â€œBecause of the expansion of Islam into [foreign] lands, many Muslims started incorporating their old traditions and customs and calling it Islam, so it became tainted,” he says. “Iâ€™m not saying itâ€™s bad to be a Pakistani, but I just think being Muslim is more important.”

Investing in Pakistan for the future

Overwhelmingly, the majority of those interviewed agree that Pakistani culture, demonstrated in the language, food, clothing, cinema, or music, is an important part of their lives, regardless of whether they choose to call themselves Pakistani or American.

Several argue that instead of economic and politically divisive incentives to engage the Pakistani diaspora, Pakistan should promote inclusive cultural values such as the respect for elders or the appreciation of the arts in the strong independent music and TV dramas of Pakistan.

â€œItâ€™s going to depend on my wife, but I want to teach my children the language, how to cook biryani, about Nusrat Fateh Ali Khan…thatâ€™s whatâ€™s important to me about Pakistan,â€ Chaudry says. He mostly focuses on wanting his children to be good Muslims over any nationality. For Chaudry, if they are good Muslims first, the rest really doesnâ€™t matter.

Even though he wants his children to learn something about Pakistan, he still feels that returning to Pakistan is not an option.

â€œI would only go there to take care of my fatherâ€™s property investments, though Iâ€™m flexible if my wife wants to go,” he says. “Honestly, [if he went,] I canâ€™t trust my dad to even come back alive.”

For Nasir, it is more of a balance of teaching her children where they come from and respecting their wishes to be seen as just an American if necessary. She wants her children to embrace their heritage but agrees that it is important for them to contribute to the country they live in as well. 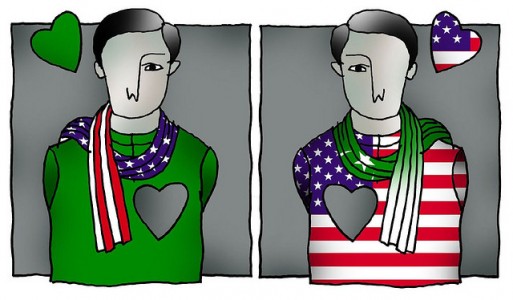 "Pakistani Teens" by Abro Art, showing the essence of a hyphenated identity for Pakistani-Americans.

As far as returning to Pakistan, there is no question that she wants to return as soon as possible. There is something nostalgic about her experiences that are both inviting and comforting.

â€œThereâ€™s something about getting shoved and pushed around on a crowded bus while someone else’s sweat is trickling down your arm, and it sounds disgusting; but, at the same time, this is what life is like here and I love it,â€ she says.

* Name has been changed on interviewee’s request.