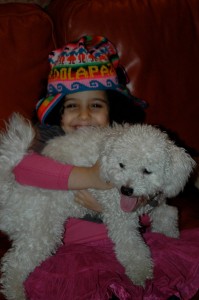 Walking past the aisles full of freshly baked Middle Eastern breads and tubs of unique nuts and grains, Takwa Hindi went straight for the Cheetos. We visited this specialty grocery store on Devon Avenue in Chicago so she could show me all the foods her mom cooks, yet Takwa, a 4-year-old refugee from Iraq, only wanted to sample the few American delicacies in the market.

I met Takwa in January when I began to film a documentary about her and her mother, Fatima. Takwa is already assimilated into American society. She loves blonde dolls, her pink cowboy boots, and most of all, Cheetos.

Though Takwa and her mom are technically Iraqi refugees, Takwa has never seen Iraq. She was born in Egypt after her mom had already fled from Iraq. Shortly after her birth, Fatima and Takwa were resettled in Chicago.

Fatima started a nonprofit, The International Foundation for the Development of Women and Children, which helps refugees as they adjust to city life in America. Despite living on a shoestring budget, Fatima and Takwa often cook authentic feasts for other refugees, as part of the efforts of the foundation. 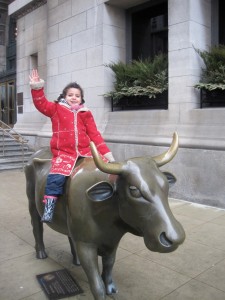 As I observe Takwa walking up and down the aisles, explaining the different foods and waving her cheese-stained fingers in the air, I realize that Takwa represents the future of refugees in America. She lives and communicates with a community of refugees, but next year she will attend Sacred Heart School in Edgewater on the cityâ€™s north side, where she earned a full scholarship, and will be even more assimilated into America. She will learn about television shows and musical groups from her peers, and they will learn about the culture of refugees in Chicago from her.

Her experiences have made her wise beyond her years, and her intellect is off the charts. In the middle of conversation, Takwa will say something like â€œwar is bad and everyone should just loveâ€ or â€œwhy does the government bring us here and leave us here like homeless people?â€ Most American 4 year olds do not even have these issues on their radar, but to Takwa, who lives in a small studio apartment with three other refugees, they are very real.

Though she lives with these experiences, she has created for herself a life of a normal, American girl. She wants me to dance with her and pick her up like sheâ€™s supergirl. If I am working, she vies for my attention with pokes, tickles, and non-stop pestering of â€œKatie, Katie, Katie, Katie.â€ And when she gets cheese-stained fingers, she licks them until they are clean, not caring to use a napkin or hand soap.

While the adults in the refugee community often struggle with adapting to America, Takwa and other refugee children like her soak in their surroundings. Thereâ€™s a metamorphosis. Though she appreciates her heritage, when Takwa grows up, she may identify more as â€œAmericanâ€ than as â€œIraqi.â€