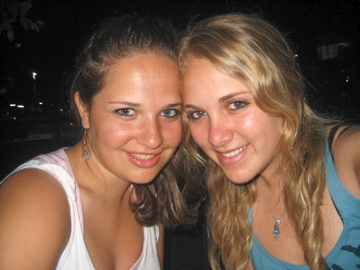 Eliana and me in 2007, the summer after we graduated high school.

â€œWeâ€™d like a cab at Lee Hall at Washington University,â€ my friend Eliana told the taxi dispatcher.

â€œIâ€™m sorry, what did you say?â€ she said and stood up, pacing towards the window in search of better reception. â€œIâ€™m sorry. I canâ€™t make out what youâ€™re sayingâ€¦â€

â€œIs the reception that bad in here?â€ I asked, as she attempted to arrange my cab back to the bus station at the end of my first visit to her at college.

â€œHere, take the phone,â€ she said, holding out her pink cell phone across her freshman dorm room. â€œTell her youâ€™re coming from Lee Hall and you need to go to Union Station.â€ I did as she said.

â€œOkay, honey. Your cab will be there in 25 minutes,â€ the dispatcher said in a thick southern drawl. I hung up.

â€œSorry, I could not understand her accent at all,â€ Eliana told me as I returned her phone. I was floored. Since becoming friends in high school, I had never seen her struggle with language.

My first real introduction to my big-eyed, blonde-haired peer was on paper in ninth grade. I was reviewing Elianaâ€™s submission to our high school literary magazine, Reflections. I had overheard her speaking Spanish to her family on the phone, which I assumed was out of courtesy for her Mexican-born parents, reverting to their mother tongue rather than her own. While sitting around the hexagonal tables of an English classroom after school, I immediately observed that Eliana was a talented writer in English.

An Indian princess ran away because she fell in love, but was not allowed to choose her own husband. Alone in the desert, she was faced with the choice between conformity and rebellion.

Like most selfishly self-conscious fifteen-year-olds, I hated to acknowledge a peerâ€™s exceptional talent. I insisted to my fellow literary magazine editors that we needed to publish the submission.â€œThis girl can tell a story!â€ I told them enthusiastically.

The summer before our senior year, Eliana and I became close friends as we wandered through the Smithsonian and built bonfires in our friendâ€™s backyard. As I got to know her, I realized Iâ€™d missed the really impressive part about the short story. Eliana only began speaking English in middle school. Sheâ€™d emigrated from Mexico the summer before seventh grade.

As we finished high school, the signs were hardly visible. The rolling râ€™s and abbreviated thâ€™s have been smoothed from her accent, like wrinkles ironed out of textured fabric. As my Americanized friend looked forward to leaving for college, her childhood friends in Mexico City were already talking about getting married. 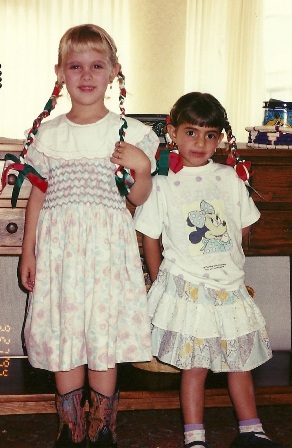 Despite our countries of origin, itâ€™s hard to imagine someone more like me. Growing up, our parents mandated nightly family dinners. During breaks from college, we bumped into each other unexpectedly at the local independent movie theater. We like eating spicy food and bringing tea home as a travel souvenir. Iâ€™ve embraced relics of her past life, like a reggaeton mix CD she burned for me and a big engraved metal mirror she brought me back from a folk art market in Mexico City.

Looking back, her submission to our high school literary magazine may have been telling her own story; of a girl growing up, torn between two powerful identities. I was fooled by her beautiful English writing, imagining immigration had been a painless experience.