Talk to me: Practicing Spanish with Abuelita 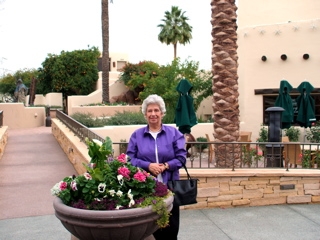 Abuelita on vacation in Arizona. (Photo by Elena Sifferlin)

â€œLo sientoÂ Abuelita,Â no te puedoÂ oÃ­r.â€ (Iâ€™m sorry grandma I canâ€™t hear you.) I yell through the phone as I climb over my summer roommateâ€™s laundry, jamming my finger in my ear to drown out the blaring London house music. I successfully make it out the door and to the dingy but quiet staircase of my NYU dorm. The third step from the top is â€œmy spot.â€ I sit each night on that step, practicing Spanish with my Ecuadorian Abuelita.

I was preparing to study abroad in Sevilla, Spain, the following month, and sought the assistance of my Abuelita for some conversational review. What I originally envisioned as a once a week chat turned into daily hour-long phone sessions. Although at times I preferred to get ready to go out with my roommates than to practice the imperfect tense, appeasing my Abuelita always trumped my social engagements.

My Abuelita immigrated to the United States when she was 21 years old and a mother of one. She was accompanying my Abuelito to the States for his medical residency. The original plan was to stay a few years and return to the country she loves so deeply. However, as the years went by, she had seven children, and eventually my grandparents divorced. Although she was forced by circumstance to stay in America, she never lost ties to her homeland. Sheâ€™s lived more years in the States than in Ecuador, but her accent is still thick and her râ€™s still roll.

Each visit to her home in Kansas City is like taking a sojourn in Quito. Itâ€™s furnished with colorful 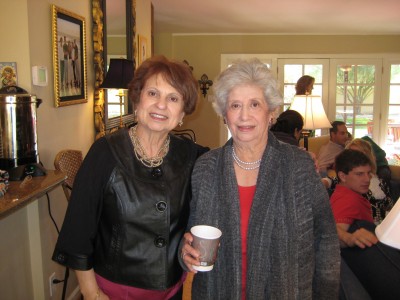 textiles and photos of her favorite volcano, the Cotopaxi. The kitchen is perfumed with cilantro. Every meal is a traditional Ecuadoran dish. Her fridge will never house American-brand microwaveable meals. As in Ecuador, each meal has several courses. Even breakfast. The morning meal may begin with sliced bread and cheese and end with steak. Each hour is filled with stories of growing up in Ecuador, the challenges of coming to America, and her plans to return to Ecuador for a visit.

Each Spanish lesson with my Abuelita was a struggle for me. Admitting my language vulnerability was only the beginning of the process. It was the first time I truly understood the struggle my Abuelita experienced when she first came to America.

One of my favorite stories is about the time she tried to pass by a man with her shopping cart at the grocery store. Instead of saying â€œexcuse me,â€ she said â€œsqueeze me.â€ The man was initially taken aback, but when she continued to demand he â€œsqueezeâ€ her, he did. And she screamed.

As she corrected my pronunciation and sentence construction, my frustration transformed to admiration. When she was my age, she was forced into a strange culture and had to quickly learn the language to survive. Now, successfully assimilated, she wanted to help me, her granddaughter, experience a new culture without the inevitable language barriers.

The daily phone calls turned into cherished and intimate exchanges for us. I was thankful she was helping me learn the language that would be my entreâ€™ into Sevillian culture. She was thankful she could share the words and sounds that defined her.