The where to of practicing Tai Chi 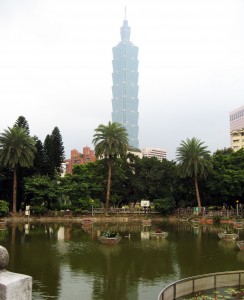 My grandather would practice Tai Chi every morning at this park. (Photo by Katie Chen)

It was a regular summer morning at my home in Los Angeles, but instead of waking up to the sunlight streaming from my window, I heard soft traditional Chinese tunes echoing through the hallway.

My grandfather, Chia-Yuan Chen, was standing in the living room, practicing his Tai Chi. He noticed me peering in from outside the door, smiled, and waved his hand, welcoming me to join him. As a five-year-old, I knew nothing, but nonetheless attempted to follow his slow, fluid movements.

He had just traveled from Taipei, Taiwan to Los Angeles to visit my family for the first time since I was born.

Back then, I did not realize how different Los Angeles was for him. He had a morning ritual back in Taipei. After waking up, he would walk to the park near his home for Tai Chi classes with his friends. Then, he would proceed to the street market nearby to buy breakfast and groceries.

However, Los Angeles is not pedestrian friendly, so he could not live as he did in Taipei because he could not drive.

Growing up in Los Angeles meant that I should have blended in with my sixth-grade classmates, but, when my physical education teacher proposed teaching Tai Chi, I discovered a cultural divide deeper than I realized.

Before, I thought the differences between my peers and me were slight: I went to Chinese school and watched Taiwanese programs. However, no one in my class knew what Tai Chi was and they all turned towards me â€“ the Asian. I was embarrassed because I had not been singled out before.

My grandfatherâ€™s history may be similar to many immigrants. His experiences define him as a hard worker. Before he settled in Taiwan, he grew up in Nanjing, China. The increased tension between the Communist party and the Nationalist government as well as Japanese invasion threats forced him to flee to Taiwan before World War II, separating him from his family.

He started out with nothing in Taiwan, but worked his way up in the ranks of the Taiwanese military, eventually becoming a weapons designer.

After occasional visits to the U.S., my grandfather moved to live with my family in Los Angeles. Though he knew no English, he made efforts to learn and eventually could carry on conversations with our neighbors.

My grandfather still practices Tai Chi every day, but not in the same living room he used 15 years ago. He has found a new group of friends to practice Tai Chi with at an elderly day activities center and has become more independent and accepting of his surroundings.

His experiences showed me that I do not need to blend in completely with society because differences can be celebrated. My classmates looked at me because they were curious, not because they were belittling me.

I no longer am the child who is embarrassed by being the odd one out. I am now a Taiwanese American who can somewhat do Tai Chi.