Crimean Tatars cling to their roots 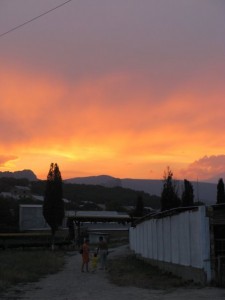 The end of a summer day in a small town along the Black Sea. Picture by Katherine Jacobsen

The smell of Crimean Tatar meat pie and pilov hang in the air with a sweet hint of tobacco woven into the loud chorus of Tatar and Russian anecdotes. Women in the family flit in and out of the kitchen with teakettles, insisting that everyone eat their fill. The lull of Ukrainian soap operas hums from the forgotten television in the next room, a gentle reminder of how this familyâ€™s life has changed in the past decades.

Iâ€™m sharing the meal at the end of my three-day stay on the outskirts of Simferopol, the capital of Crimea. My host, Alfina, is my age, barely five feet tall with dark hair and slightly Asian features. Her English is accented and speckled with slang from the American romantic comedies she downloads on her laptop.Â  Alfinaâ€™s favorite t-shirt has a giant sparkling strawberry on it; she got it two summers ago when she went on a work-travel program in the States. The fabricâ€™s sparkles are falling off, but she wonâ€™t be going back to the States to replace it. She knows it is her duty to stay in Crimea and look after her parents.

I first met Alfina via email. She is part of an organization that helps university-aged students find jobs abroad. Her emails described the beautiful beaches of Crimea, and the opportunities I would have to work at seaside summer camps, teaching English. I even received a brochure about Ukraine. The text assured me that the adjustment would be smooth, knowledge of the vernacular unnecessary, and that I would have a chance to meet â€œlocals.â€ That turned out to mean Alfina and her family.

Alfinaâ€™s family is ethnically Crimean Tatar, a minority in Crimea. Her parents and grandparents were deported in 1944 to Uzbekistan where they lived in exile until 1991. When the Soviet Union collapsed, and the former Soviet bloc underwent structural overhauls, many Tatars hoped they could start moving back to Crimea, to their homeland. But twenty years later, Crimean Tatar demands are still largely ignored, drowned by post-Soviet bureaucracy. The Tatars remain, officially, landless.

The drive to my hostsâ€™ house underscores the dilemma that faces Tatars who are unwilling to pay often-inflated apartment prices in Simferopol proper.

Thirty minutes of progressively deeper potholes led to Alfinaâ€™s neighborhood outside the main hub of the city. Her father drove us in his 1980s used sedan, the radio blasting Tatar-style music, with Russian lyrics. He turned the radio down at regular intervals so that Alfina could translate the details of every building we passed.

The buildings he described only came to life when I closed my eyes: Her cousinâ€™s new roof, her uncleâ€™s new fence and the mosqueâ€™s additional roomâ€¦.Â  Eyes open, the deserted dirt streets were lined with rows of concrete, one house indistinguishable from the next. Abandoned wheelbarrows, mortar mixers and more used cars were the only indications of the semi-legal residents.

At first, Alfinaâ€™sÂ  house was indistinguishable from the other settlement houses. However, the houseâ€™s exterior belied the warmth inside. There were wall hangings in Arabic, oriental rugs spread tastefully on parquet floors, and a copy of the Quâ€™ran next to the china cabinet.

It seems that in the absence of government legitimacy, cultural authenticity prevails. As roughly 12% of the total Crimean population, Tatars are often overlooked by authorities as a nuisance who will disperse with time. That is my host familyâ€™s greatest fear, yet also my host’s unspoken desire.

Alfina has not spoken Tatar since her grandmother died a few years earlier, and seems uninterested in maintaining her language ability. There is no point, she says, in preserving the Tatar tongue. Linguistic differences are not appreciated in recent immigrants. English is something useful, Russian necessary and Ukrainian desirable. Tatar is merely a language of memory. Such harsh pragmatism seems out of place in a house built to reconstruct the past.

I focus intently on my pilov, trying to understand what is going on. Food is constantly heaped on my plate, my cup is never empty, and sometimes, I even get a nod or a question in painfully slow Russian, though I prefer to get lost in my own English thoughts.

Despite the overwhelming hospitality, I feel like an intruder in the familyâ€™s mealtime rituals. What right do I have to witness the intimate difficulties my hosts face on a daily basis?Â  How can I burden their already strained budget by staying with them three days with nine large meals? Why do they stay here in the first place? And why even stay here if Alfina is letting her language die?

As the evening draws to a close, I have retreated even more into my own thoughts. The rapid language mÃ©lange has made it impossible to even feign comprehension of what is going on. Tatar slides to Russian and back again while the Ukrainian television drones on.

I realize that for the first time in my life, I am the minority at mealtime. I am the tallest, palest person in the room. Â And I am struggling to speak fractured Russian. Â Why?Â  The same reason why Alfina wants to forget her Tatar: to fit in.