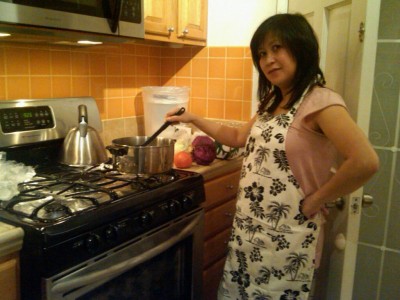 The ingredients in the market are covered with characters from the English alphabet, but the words are not in English. Most of the products are imported from various Asian countries. My Aunt Lucille and I, meandering through the aisles of a Filipino market in Los Angeles during the peak shopping weeks of the Christmas season, move swiftly with purpose.

With no wasted motion, she leads us to her desired section. Her eyes eagerly scan the shelves, clearly focused on their target. After a few seconds, she successfully finds her treasured item: ube, a purple-colored yam integral to countless Filipino desserts. With this, she instantly feels reconnected with both her daughter and her native city of Manila.

For Aunt Lucille, the short twenty-minute drive from her home in the Los Angeles suburbs to the Filipino market in the heart of the city transports her back to the Philippines, even in the midst of Mexican specialty shops and Jewish delis.

â€œItâ€™s just like back in Manila,â€ I recall her saying as she inspected each ube. After selecting eight firm and sizeable pieces of purple ube, we made our way to the coconut milk.

The taste of ube for Aunt Lucille provides the forum and familiarity necessary to keep the Filipino culture alive in both her and her daughter, Jillian.

â€œToday, Iâ€™ll have Jillian watch me cook the ube again so sheâ€™ll always remember her heritage,â€ Aunt Lucille said as we packed the grocery bags into the back of the car. Whenever she sees ube, Aunt Lucilleâ€™s reminded of her time in the Philippines, when her mother taught her how to make these ube-based desserts. I discovered this after she led us to the ube earlier that day and Aunt Lucille immediately broke off into anecdotes about her childhood in Manila.

The struggle my Aunt Lucille encounters is common among immigrant parents. Iâ€™ve experienced the same struggle with my parents. A disconnect between old customs and new traditions threatens the fragile link of understanding across generations.

Immigrant parents like Aunt Lucille constantly worry about the inability to teach their children about old practices from their native lands in the face of engulfing, ubiquitous American culture. Aunt Lucille, however, combats this tension in a very unique yet subtle way, with ube-based desserts.

After boiling the ube for an hour, Aunt Lucille instructed Jillian to melt the butter while I cracked the eggs. We were making ube pudding, a rich, buttery, dense purple pudding topped with candied almonds for the party tonight.

â€œThis oneâ€™s my favorite,â€ Jillian said. At that moment, I stole a glance at Aunt Lucille who couldnâ€™t help but smile.

This ube pudding and other ube-based desserts bridge the gap over the ocean between Los Angeles and Manila for Aunt Lucille. Though a citizen of the United States for 13 years with her accent softening, her culture and her native country remain fresh thanks to ube.

Easier than learning a native language and cheaper than purchasing flight tickets, cooking may be the most practical way for second generation Americans like Jillian and me to connect with our parentsâ€™ past.

Through the power of purple yams, my Aunt Lucille hopes to pass down Filipino practices and culture to her Filipino-American daughter. Manila has never felt so accessible.