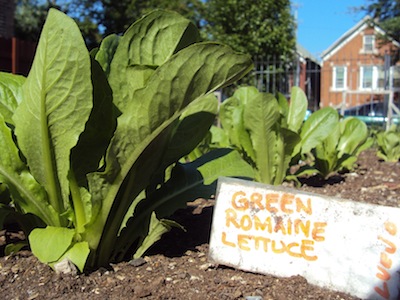 [Read the story as published in Spanish or in English in Extra, as a collaboration with Immigrant Connect, and listen in on a discussion of the issue that aired on Vocalo 89.5 FM in Chicago on July 11, 2011. Also read a companion story – Community programs needed to fight obesity among Latinos by Miranda Viglietti, also published in Extra.]

Late on a rainy Wednesday morning, a half dozen of Catalina Martinezâ€™ friends, neighbors and fellow mothers trickled into the kitchen of her Little Village house to catch up over chicken salad sandwiches. They clamored for copies of the recipe, which called for fat-free yogurt instead of mayonnaise and recommended serving the salad on whole wheat bread.

This monthly lunchtime gathering had an agenda: to learn to prepare simple, healthy and kid-friendly fare as part of their commitment to a healthy lifestyle for their families.

Sam Graham, a school health liaison from St. Anthony Hospitalâ€™s Community Wellness Program, brought the ingredients, copies of the recipe, and extra basil plants for anyone interested. Several women were.

In addition to working with parents to bring healthy cooking into the home, the Community Wellness Program offers â€œMission Nutritionâ€ classes in local schools so that kids, too, are aware of how their food choices affect their health. Graham led a class on a Monday morning at Finkl School in which third graders learned about the â€œtricksâ€ food marketers use to make their products look bigger, tastier and healthier. They reviewed quick ways to identify healthy food options: colorful foods usually have more vitamins; a serving can fit in the palm of your hand; juice should say â€œ100% juiceâ€ on the package.

Jovita Flores, a manager for the Parents United for Healthy Schools campaign, which mobilizes efforts like the cooking group at Martinezâ€™ house, points out that what kids learn in the classroom often finds its way into their home lives. â€œThe students come to their houses and say, â€˜I canâ€™t eat this because my teacher says this is not healthy,â€™â€ she says. â€œStudents believe what their teachers say.â€

In Little Village, community members recognize that the fight against obesity has multiple fronts, and that a united effort on the part of parents, schools and neighborhood organizations has more of a chance of success than any isolated campaign.

Average median household income in the ten census tracts that comprise Little Village is $31,776, according to the Little Village Chamber of Commerce. Residents face the same socioeconomic barriers to nutrition that confront lower-income communities across the country, regardless of their ethnic makeup.

â€œLots of families really have to figure out how to budget what theyâ€™re going to feed their kids,â€ says Simone Alexander, who manages the garden program at Enlace Chicago, a community development organization in Little Village.

Cultural factors create additional challenges. For immigrants and their families, the jarring experience of moving to a new country can derail once-stable eating routines, and the price and prevalence of fast food makes it seem more appealing.

â€œThe transition coming here is a struggle for different people in different ways,â€ Alexander says. â€œ(For) some people, in this country, itâ€™s a lot easier to just get cheap crap thatâ€™s processed and not food.â€

Many immigrants tell stories of putting on weight after arriving in the U.S. and transitioning to a more sedentary lifestyle, making it harder to burn off the calories of some typical Mexican dishes (link to Mirandaâ€™s story about physical activity).

Joel Meloâ€™s waistline expanded from 30 to 38 inches after he moved from Mexico. â€œIn my country, I was thin,â€ he says. â€œWhen you arrive here, itâ€™s a lot of work. You eat, you sleep. In Mexico thereâ€™s a lot of activity.â€

Meloâ€™s weight gain led him to seek out a nutrition and cooking class at CommunityHealth, a free clinic in West Town that caters to a heavily Hispanic clientele. The classes play out like a more formalized version of the gathering in Catalina Martinezâ€™ kitchen. Each two-hour session, taught in Spanish, includes nutritional information like the distinction between animal and vegetable fat and whole grains and refined carbohydrates, as well as a cooking demonstration, and culminates with students taking home bags of ingredients that they can use to test the nightâ€™s recipe in their own kitchen.

Almost all of the 12 students in the class reported that theyâ€™d successfully cooked last weekâ€™s recipe at home. Melo says heâ€™s already started losing weight since making an effort to eat more fruits and vegetables, yogurt and skim milk.

â€œObviously we canâ€™t go into the home, but we try to vigorously educate our patients,â€ says Dr. Arnold Widen, a CommunityHealth physician. â€œWe try to make it simple. Itâ€™s important to have (staff) who are culturally sensitive and able to help modify the diet to make it less caloric but still something people would want to eat.â€

Simple changes toward a new culture of food

Classes like the one at CommunityHealth and the one Martinez hosted (the location rotates each month between the womenâ€™s houses) focus on re-imagining popular dishes to show that healthy eating means tweaking ingredients, not a diet overhaul. Silvia Trejo, one of the mothers in attendance, explains how sheâ€™s cut red meat almost entirely out of her familyâ€™s diet, instead cooking soy meat, turkey, chicken and fish. Bexali Morales makes tacos with soy meat now and turkey burgers instead of hamburgers. Everyone has started to favor olive oil and incorporate more vegetables in their familyâ€™s cuisine.

â€œThe danger of the recipe is the ingredients,â€ says Jovita Flores. â€œI adjust the Mexican recipes to my own necessity and then share with other people, and other people are doing the same thing.â€

Flores makes chiles poblanos, a popular stuffed chile dish, with egg whites instead of whole eggs, and smashed almonds with just a little oil for flavor. â€œItâ€™s the same recipe but less dangerous,â€ she says.

â€œUs Mexicans, our culture is to eat a lot,â€ says Sahida Martinez, another participant in the cooking group. â€œWe want to give our children a new culture of food.â€ 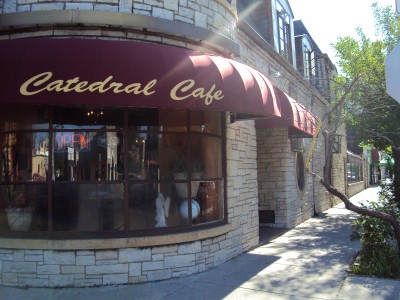 Abraham DueÃ±as' cafe and neighborhood gathering spot serves up a menu that shows how traditional Mexican food can be healthy but still familiar and delicious. (Photo by Claire Thompson)

There is no shortage of ideas in Little Village about how to do that. Abraham DueÃ±as opened his coffee shop, CafÃ© Catedral, in 2005, with the goal of offering alternatives to the often high-fat traditional Mexican food that abounds in the neighborhood. He, too, has offered cooking classes for parents that demonstrate how to make healthier versions of traditional dishes. Heâ€™ll show how to prepare pozole, a stew usually made with pork and corn, with chicken breast and other vegetables instead, or explain how putting basil, with its taste suggestive of pizza, on vegetables can makes them more appealing to children.

â€œEven with the economy, you can still eat healthy,â€ DueÃ±as said. â€œMy philosophy is not that youâ€™re never going to be eating potato chips. It means once in awhile, not every day. You donâ€™t have to think healthy means (being on a) diet.â€

DueÃ±as supports the movement toward a sustainable, healthy food system in Little Village by purchasing for his restaurant the produce of several community gardens organized and maintained by Enlace Chicago and the Little Village Environmental Justice Organization (LVEJO). When fast food often comes cheaper than fresh fruits and vegetables, the gardens represent another piece of the puzzle of accessible nutrition.

â€œGrowing your own food in a community garden is a substantial solution to the global food crisis,â€ says Selene Gonzalez, an urban land organizer for LVEJO. â€œIf you canâ€™t go to Whole Foods, you should be able to grow your own food.â€

LVEJO leads gardening workshops to help orient its volunteers, many of whom were farmers or gardeners back in Mexico, to the peculiarities of growing in Chicagoâ€™s harsh climate, in the hopes of giving them the tools to both contribute to the community garden and maintain their own plots.

â€œI love working with the earth,â€ says Rafael Reyes, who has volunteered with LVEJO for three years. â€œ(Organic food) is healthy, with a different flavor. Itâ€™s very different to just buy it from the store.â€ Reyes says his neighbors now want to get involved, too. 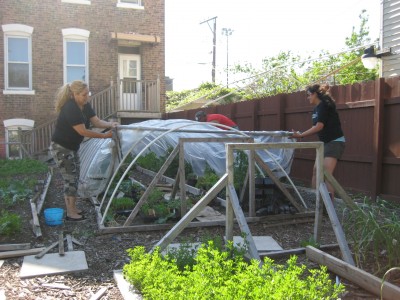 Selene Gonzalez, right, and other volunteers get the Amor de Dios community garden ready for summer. (Photo by Miranda Viglietti)

Gonzalez sees the gardens as an example of how effective grassroots organization can be in a close-knit community like Little Village. â€œYou already have people who care about their community, who are organized,â€ she says. â€œPolitics should be influenced by what the community wants. It should be ground to top, not top to ground. If you have people in the community feeling like they have no control over the system, theyâ€™re not going to be invested in it. By having a community garden they can take ownership of it.â€

The mothers gathered in Catalina Martinezâ€™ kitchen all express a desire to take ownership of their familiesâ€™ health. â€œWeâ€™re all here for the same reason,â€ Silvia Trejo says.

â€œWe do all this for our health,â€ adds Sahida Martinez.

Liliana Hernandez skipped the latest cooking group to attend a Chicago Public Schools board meeting to advocate for the importance of school-based solutions to healthy eating.â€œWhat I want most is for the schools and the community to do everything possible for the parents and for the kids,â€ she says. â€œWithout our health, we have nothing.â€