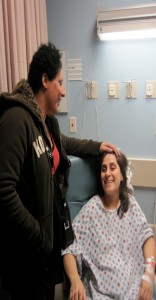 Fatima Hindi visits her friend Mary Hairan in the hospital.

For the first months of her daughterâ€™s life, Fatima Hindi was forced to feed her food Hindi collected from garbage. Hindi, a former professor at Baghdad University, had fled to Egypt from Iraq after she was kidnapped and tortured. On Sept. 20, 2007, she came to Chicago, with hopes of a better standard of living, including health care.

â€œBefore I came here, I have some problems with epilepsy and depression, and people know Iâ€™m going to America and they say â€˜Oh in a few months, everything be very good,â€™â€ Hindi says.

Hindi has dedicated her life in the United States to helping fellow Iraqis and refugees in Chicago. She runs an organization called The International Foundation for the Development of Women and Children. Through her philanthropic work she met Mary Hairan, an immigrant from Iraq facing several health struggles as well.

Hairan came to the U.S. in 2010 to marry her fiancÃ©, who is a refugee, though she herself is not a refugee. A month after getting married, Hairan was diagnosed with ovarian cancer, and her husband left her. Hairan had no friends in the U.S. other than her brother and his family and no public assistance from the government.

Refugees and immigrants hold different legal statuses in the U.S. based on how and why they arrive. People qualify for refugee status if they have suffered persecution based on race, religion, participation in a social group and/or nationality. They are resettled in the U.S. after an application process.

Contrastingly, immigrants come here of their own accord.

Though they are both from Iraq, Hindi is a refugee because she was forced to flee and Hairan is an immigrant because she chose to come to the U.S.

These differences in status translate into different forms of health care coverage.

Upon arrival in Illinois, refugees receive an initial medical exam paid for by the federal government, according to Jenny Aguirre, Refugee Health Coordinator for the Illinois Department of Public Health. [See the department’s Health Guide for Refugees that is published online in eight languages.] After the exam, which costs about $400, refugees can qualify for Temporary Assistance for Needy Families (TANF) or Refugee Medical Assistance (RMA), depending on size of family and income, she says.

The Chicago Uptown Clinic, for instance, has many refugees return for follow-up appointments, case management assistant Anita Zildzica says. Patients with medical cards are not charged, but those without can only expect to spend between $15 and $125, depending on the family size, she says.

Htoo Nyein, a Burmese refugee, goes to the Chicago Uptown Clinic with his wife and two children for physicals and checkups every couple of months.

Both TANF and RMA programs ensure immediate health care for an extended period of time, says Darwensi Clark, associate director of refugee family services at Heartland Alliance, a refugee resettlement agency. TANF lasts for up to five years and is for families with children younger than 18. RMA was established to support refugees without families, and lasts for up to eight months.

Clark has found that most refugees are successful in securing jobs that provide private health care before their five years with TANF are up.

Though the assistance programs provide extensive aid, no system is perfect. Hindi and her daughter qualify for TANF, but Hindi, who is disabled, says the assistance is not enough to cover all her health expenses.

â€œI have problems with seven teeth, but public aid only covers one tooth,â€ she says. Â Hindi paid almost $3,000 to care for the other six teeth.

Overall, Hindi says she has been frustrated with the health care she has received and knows many other refugees are too.

Though TANF and RMA are specific to Illinois, all states have similar subsidy programs funded by grants from the federal government, Clark says.

Ilham Hasan, an Iraqi refugee, was resettled in Kentucky two years ago with her three children. After losing the child she was three months pregnant with, Hasan began receiving treatment for her kidney failure. She recently moved to Chicago with her kids, and continues to receive assistance to pay for dialysis three times a week.

Hasan, in desperate need of a kidney, hopes to be able to find a donor so she can start working and afford her own private insurance.

Immigrants cannot qualify for public health assistance until they have permanent residency for five years, according to Hyeyoung Lee, director of senior services and public events at Korean American Community Services. There are few options for those who cannot afford private insurance or do not receive insurance from employers, she says.

Rekha Thapa, an immigrant from Nepal, says she has been frustrated by the lack of affordability of health care coverage since her arrival in the U.S. in 2005.

â€œI feel like the health care program is really weak in the USA,â€ Thapa says. â€œMaybe for people who make lots of money, itâ€™s good for them.â€

Thapa rarely visits the doctor and simply buys over the counter medicines when she is sick, she says, because she does not have insurance.

Thapa, however, points to the distance to Stroger Hospital from Edgewater and says that people often have to wait a very long time for care, and sometimes may not even get in to see a doctor at all.

Though Thapa is not insured, her three-year-old son is insured by All Kids, an Illinois program that provides health care to all children in Illinois, whether immigrants or not. Unlike TANF for refugees, which is free, All Kids insures Thapaâ€™s son for $25 a month. The cost varies by family and is determined by income.

All Kids will also insure pregnant women during the time of their pregnancy, according to Itadel Shalabi, one of the founders of Arab American Family Services. The child will remain insured after birth, but the coverage of the mother, if she is an immigrant, varies depending on length of residency. If the immigrant mother has been in the U.S. less than five years, she will remain insured for only three months following the pregnancy. Residents who have been here for longer than five years can remain insured longer, Shalabi says.

Immigrants without private health insurance can face huge problems if they get severely ill before they have attained five years of residency because they will not qualify for public assistance.

Hairan, who has only been in the U.S. for one year, is receiving assistance from Heartland Alliance, neighborhood mosques, and the Iraqi American Society to help pay for her living and health care costs. She was introduced to these organizations by friends.

One friend has been helping her throughout her sickness. He talks to her every day and has been taking her to regular doctor appointments and chemotherapy for six months. He was with her during a seven to eight hour surgery in December.

â€œI just try to be a good person,â€ says the friend who chose not to provide his name.

With the help of friends and organizations, Hairan is able to continue getting medical treatment even without private health care. Though Hairan found it hard to comment due to the weakness from her chemotherapy, she has asked her friends to share her story.

Illinois is one of the best states for refugee health care because of how well the resettlement agencies collaborate, discuss their issues, and solve them together, Clark says.

Working together, refugee resettlement agencies are able to perfect their education programs. Upon arrival, refugees are required to attend orientations and seminars about their health care options.

Heartland Alliance also provides English classes, which make trips to the clinic much easier, says Olguna Obas, an 18-year-old refugee from Haiti who attends these classes, as well as classes at Truman College.

Obas says she appreciates how the doctors at the Chicago Uptown Clinic speak slowly so she can understand what is happening.

â€œEvery time heâ€™s [examining] you, he gives you good service,â€ Obas says. â€œIn my country people never tell you what you need, why youâ€™re there. Itâ€™s different.â€

Some immigrants, on the other hand, may have a hard time understanding their various options because they do not have any mandated access to education.

Thapa says she gets most if her information about health care from the internet or her friends. She says she knows that free clinics exist, but never hears about them.

â€œIt would be great if they announced it on TV or something,â€ she says. â€œSometimes there are state run programs, but nobody knows.â€

Similarly, Rumana Eti, an immigrant from Bangladesh, says she has been frustrated by the lack of information regarding her health care options. 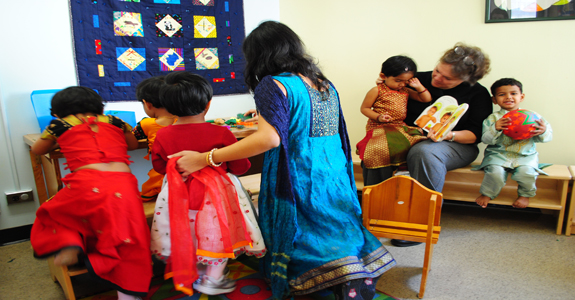 Many immigrants rely on community-based programs for their information about health care. At the Sacred Heart School, Mary Burke Peterson runs an early education program for immigrant parents called â€œChildren of the Heart.â€ While the immigrant children play with Sacred Heart students, Peterson brings in nursing students from surrounding universities to offer health tips to the parents.

â€œA lot of what we try to do is direct them to reliable sources,â€ Peterson says.

Peterson tried to help Eti, who is 6 months pregnant, find the right hospital for her delivery.

For the first five months of her pregnancy, Eti was insured through her husbandâ€™s employment insurance. When her husband lost his health care benefits, the couple worried about having to switch hospitals and doctors so late in her pregnancy. Northwestern Memorial Hospital, where she had been going, would not accept the Medicaid coverage she was eligible for once her husband lost benefits.

Eti and her husband explored other hospitals for the delivery. In the end, because her husband will begin to receive health insurance on Sept. 1, they have chosen to pay for medical appointments themselves until then. Eti says she preferred to stay at Northwestern Memorial even if she had to pay more.

Despite lack of public aid and education about other options, many immigrants like Eti remain positive about health care, and life in general in the U.S. Eti and many of her friends at Children of the Heart agree that even the limited and at times confusing health care system is preferable to that of their home countries.

Still, there are shortcomings in the public assistance program. Hairan and Hindi depend on the generosity of friends and local organizations to pay for their significant health costs.

â€œThis not a good situation for me, for Mary, for a lot of refugees,â€ Hindi says.