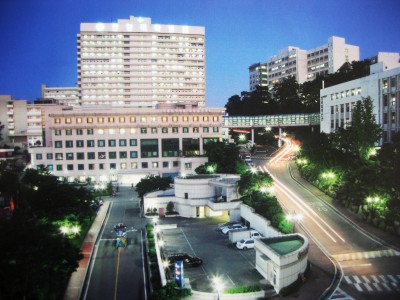 South Korea is becoming one of the new medical tourism hot spots in Asia, with Americaâ€™s Korean immigrant community a ready to order market.

Travel agencies, airlines, insurance companies, Korean-owned businesses and even large corporations are positioning themselves to take advantage of a hard to ignore reality: It can be significantly cheaper to fly from Chicago, for instance, to South Korea, be admitted into a quality hospital, have surgery, recuperate and tour South Korea than to have the procedure done anywhere in the United States.

The Korean government became involved in marketing its health care system abroad after it enacted a law in 2009 allowing private hospitals to advertise abroad with the support of the government, says Dae B. Lee, president of International Lifestyles and Wellness Institute (ILWI), a Chicago-based medical tourism and insurance company.

Korean Tourism Organization (KTO), a government agency dedicated to promoting the health care system abroad with offices now based in the United States, has contacted American corporations, introducing them to health care travel packages that they can purchase to reduce their costs on more expensive medical procedures for their employees. The agency approaches individuals from other countries as well.

Morbidly obese and at risk of blindness, amputation, and death, Lynda Sim was in need of surgery that the New Zealand district health boards denied her.

When the KTO approached her with the option of traveling to South Korea for bariatric surgery, Sim, a 44-year-old mother, took the package.

KTO sponsored the whole trip â€“ the surgery, hospital, travel expenses and a tour of South Korea at the end of her stay â€“ which was organized by KMI International, a medical tourism agency. 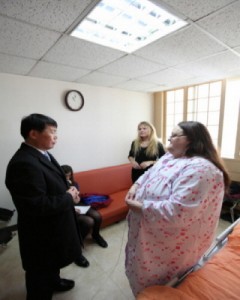 Sim meeting with a KTO executive at the hotel she stayed at. (Photo by Lynda Sim)

The governmentâ€™s aggressive marketing has entered the U.S. market, targeting mainly Koreans and other Asian ethnicities. â€œThere will be more people going overseas to Korea, but at this time, itâ€™s at a primitive stage,â€ says Steven Chong, president of Prime Medical Solutions, another medical tourism company.

Most Korean immigrants in the U.S. face the burden of paying medical bills without health insurance. The travel packages offered by private agencies and the Korean government allow them to get quality care at affordable prices.

The packages are tailored to the travelerâ€™s individual needs. Jack Serrechia, a case manager at Asiana Airlines who plans the packages for clients, says he has seen an increase in Koreans in the U.S. purchasing these packages since 2009. The agencies partner with hospitals in Korea, so the packages can include anything from travel and transportation to hospital appointments and lodging.

â€œAsiana works with Hanyang Hospital and the packages are like an Ã¡ la carte menu,â€ Serrecchia says.â€œYou just pick and choose and the appointment is made and you get your stuff done.â€

There are facilitators who are the middlemen, connecting patients with hospitals in Korea by finding the appropriate doctor and setting up appointments.

â€œWe were met at the airport in Korea by representatives of KMI and taken by minivan to the hotel, which was about an hourâ€™s drive away,â€ says Sim, who added that a KMI employee stayed at the hotel so theyâ€™d be available round the clock. The next day, Sim said, a van picked her up and took her directly to the hospital to start tests and surgery.

Lee says his group, ILWI, works with the Korean government to advertise to foreigners. Their main focus now is Korean Americans within large Korean corporations. â€œWhen their employee wants to go over for treatment or the wellness program, they contact us and we help them go to the right place for their needs,â€ Lee says.

The hospital facilities have an international ward with employees trained to speak English and other languages as it serves people from China, Japan, Russia and Southeast Asian countries.

Sim says she had no trouble communicating with the staff at Soon Chung Hyang University Hospital in Itaewon. â€œDr. Kim thinks he doesnâ€™t speak very good Englishâ€¦but his English was actually great,â€ she says. â€œHe also carried with him an electronic translator.â€

According to Sim, the staff assigned to her spoke English and her nurse translated on occasion if the doctor had trouble explaining medical jargon. 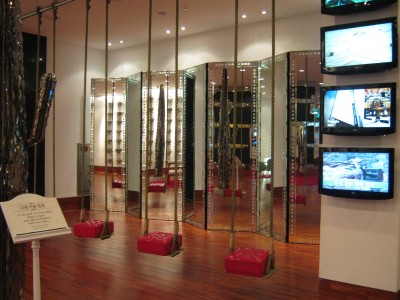 Chong says people can choose to tour Korea after they are finished with their time with the hospital and the agency organizes the transportation and lodging for that as well.

Sim spent a week sightseeing and everything was organized by KTO. â€œWe went on a cruise on the Han River, went to museums, visited the Hospital of Oriental Medicine, had facials at Dr. Oracle, saw a Nanta performance, and our free time was spent shopping,â€ she says. 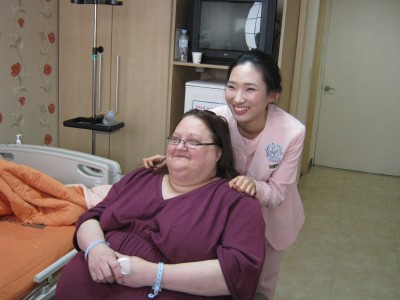 Sim and the nurse who took care of her during her stay at the hospital. (Photo by Lynda Sim)

Buying a travel package not only solves the issues Korean immigrants have with the costs of health care in the U.S., but also the discomfort they may feel uncomfortable when speaking in a second language.

Though he has lived in the U.S. since 1977, Lee feels nervous when he goes to American hospitals for a wellness checkup.

Lee says going back home for health care made him feel calmer because there are no language barriers.â€œGetting sick is one thing,â€ he says, â€œbut if you donâ€™t understand the doctor well, thatâ€™s another problem.â€

Haejung Oh, a Northwestern University sophomore, says the U.S. health care system is too complicated. â€œThere are a bunch of doctorsâ€™ offices on my street and when we get sick, we just go there and show our insurance card and see the doctor,â€ she says. â€œIt takes a second and costs less than $5.â€

She has not been to a hospital in the U.S. because her friends have told her it is too expensive.Â â€œI avoid going to the hospital by taking care of my health beforehand,â€ Oh says.

The difference in cost is significant.Â In South Korea, wellness screenings are done every year, but it is too expensive in the U.S. as it includes all the tests for early cancer diagnosis, like an endoscopy, colonoscopy and other exams.

â€œJust doing an endoscopy and colonoscopy [in the U.S.], the charges for the hospital, doctors and anesthesia and everything can go up to about 10 grand,â€ Lee says. â€œSo if you can do it for about $500 to $700 in Korea, of course people would prefer Korea.â€

The U.S. government has tried to address these issues recently. â€œWith the Obama plan, itâ€™s more comprehensive in terms of wellness,â€ Lee says. â€œBut still, the insurance is not going to cover colonoscopy until age 50 and once you do it, if itâ€™s good, theyâ€™re not going to do it for another 10 years.â€

For those who have health insurance, the deductible is high and 40 percent of the Korean population does not have it, according to the 2000 U.S. Census.Â â€œUnless you are very sick, you are paying out of your own pocket,â€ Lee says.

More U.S. companies are using the option now. Chong says American companies are starting to get their employees health care abroad. â€œThey have tons of medical bills every year,â€ he says. â€œReplacements, bypass surgeries, they can be taken care of at a fraction of the cost. If youâ€™re an accountant, this is good for the company.â€

According to Chong, Korean hospitals are of the same caliber as their American counterparts, with the same quality of doctors and facilities. However, foreigners have priority in the hospitals in Korea. Sim says she did not have to wait to run tests or perform surgery.

Ultimately, according to Lee, choosing to travel back to Korea depends on the personâ€™s preference.

â€œIâ€™m not saying [Korean hospitals] are better,â€ he says. â€œBut as a Korean, when you speak the same language, you understand better so itâ€™s peace of mind.â€

The packages offered by travel agencies and medical tourism companies not only take the burden of health care costs off the shoulders of many Korean immigrants, but also reacquaints them with their homeland.

â€œA lot of times for people who havenâ€™t gone back in 10 years, they donâ€™t know where things are anymore,â€ Chong says. â€œThe packages make things a lot simpler for them.â€