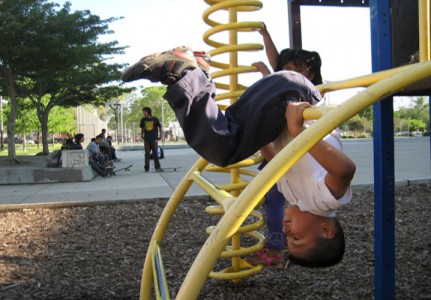 Yolatan Garcia, 6, plays with his siblings and cousins at the Gary Elementary School playground. In neighborhoods like Little Village, residents often have limited access to safe spaces to exercise (Photo by Miranda Viglietti)

[Read the story as published in Spanish or in English in Extra, as a collaboration with Immigrant Connect, and listen in on a discussion of the issue that aired on Vocalo 89.5 FM in Chicago on July 11, 2011. Also read a companion story – Promoting healthy eating from the ground up in Little Villageâ€™s Hispanic community by Claire Thompson, also published in Extra.]

Pastel colored balloons and streamers decorate the basement ceiling of Amor de Dios United Methodist Church in Little Village. Fitness instructor Tanya Zavala leads more than 25 people in a Zumba workout on this humid evening in mid-May. While adults follow along behind Zavala, moving in time to the music, children in the back of the room laughingly mimic the workout.

The decorations are in honor of Magali Moreno, a registered nurse at St. Anthony Hospital who organized the free Zumba class twice a week at the church.

â€œI think everyone here wants to become healthier,â€ Moreno says, while sitting on the basement stairs next to a few little girls who came with their mothers. â€œThe girls in their 20s want to look good. The older ones are starting to hurt. Theyâ€™re starting to have lots of little aches and pains occur.â€

When the class ends, tables and chairs are swiftly produced and food gets placed on a few tables at the front of the room. Someone calls Moreno into the adjoining kitchen, and when she comes back, the Zumba group presents her with a couple of gifts in honor of National Nurses Week.

â€œI cannot believe this!â€ Moreno says, while everyone in the room smiles and take turns giving her hugs.

Moreno has made exercise more accessible to people in Little Village by partnering with Bosen Chicago, a multi-purpose fitness center on the cityâ€™s northwest side, to have an instructor teach free classes at Amor de Dios Church for ten weeks.

Elvira LÃ³pez, 51, relaxes in a chair during Morenoâ€™s party. LÃ³pez says she tries to exercise in order to improve her cholesterol and high blood pressure.

â€œI feel good,â€ says LÃ³pez, who lives a half block from Amor de Dios. â€œI like to move. I like to dance.â€

Ensuring that exercise opportunities are accessible within a neighborhood is key to improving community health, Moreno says.

â€œWhen we remove the barrier of money, [the community] will come out to test it out and see if they like it,â€ Moreno says.

More inactivity in the U.S.

Close to 52 percent of Latinos reported being inactive and having minimal physical activity during their leisure time, according to a National Health Interview Survey conducted in 2007 by the Centers for Disease Control and Prevention and theÂ National Center for Health Statistics. In comparison, only 39.1 percent of all people 18 years and older reported being inactive.

CommunityHealth offers free exercise programs four times a week so that clients can have a safe and accessible place to get exercise, despite their limited resources, Calendo says.

In Little Village and Humboldt Park, two predominantly Hispanic neighborhoods, the amount of obese or overweight children between the ages of twoÂ and 12 ranges from 51 to 60 percent respectively, according to a study by the Sinai Urban Health Institute.

The same trend holds in nearby Pilsen, another largely Hispanic neighborhood, where 65 percent of adults and 54 percent of children are overweight or obese, according to a 2009 nutrition and physical activity survey conducted by El Valor and the Consortium to Lower Obesity in Chicago Children.

Latino immigrants typically have less exercise built into their daily routines after they move to Chicago, and they often gain weightÂ by eating the inexpensive and unhealthy food thatâ€™s readily available in their new neighborhoods. [Read the companion story: Promoting healthy eating from the ground up in Little Villageâ€™s Hispanic community]

While unhealthy eating can lead to weight gain, exercise plays a central role in fighting and preventing obesity, Calendo says.

Two young boys dribble basketballs on the sidewalk in front of their home on Christiana Avenue. A couple of houses down, another pair of boys stand in the grass, chucking a basketball back and forth. 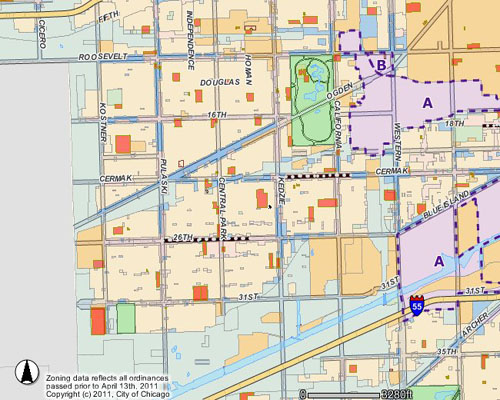 While adults take advantage of outdoor facilities at places like Piotrowski Park in the southwest corner of the neighborhood, accessing these spaces can be problematic for children.

Iris Bahena, 22, says that even though many people utilize the track and space offered at Farragut Career Academy High School, she thinks her neighborhood needs more parks.

â€œAdults are usually there playing baseball and football,â€ Bahena says. â€œKids are running on the streets.â€

Safety can also be an issue at the parks in Little Village. 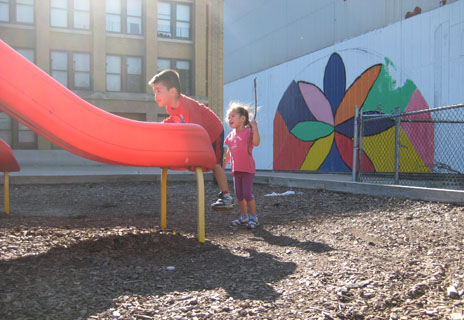 Norberta Garcia says it's often hard for children to use the parks in her neighborhood. Her 5-year-old son Jovany climbs up a slide at the Gary Elementary School playground. (Photo by Miranda Viglietti)

On some afternoons, Norberta Garcia, 30, takes her five children to the park at Gary Elementary School.

While her four older children run around the playground with their cousins, Garcia sits under a few nearby trees with her baby son and a couple of other moms.

Garcia says itâ€™s difficult for children in her neighborhood to use the few local parks because these outdoor areas are very busy. Plus, she says the parks are not safe enough.

Fear of gang violence also keeps Jorge ChÃ¡vez from exercising outside. The 55-year-old says he stays inside and lifts weights instead of running at the park near his home because he doesnâ€™t trust his safety outdoors.

Other Little Village residents feel differently about exercising outside.

Tom Calderon, a community watch patrolÂ near Farragut High School, says he sees people jog six blocks up and down Sawyer Avenue and use the track behind the high school.

â€œIt really depends on how the individual relates to the neighborhood,â€ Calderon says. â€œIâ€™ve never had to worry much about gang bangers.â€

One way Latinos can overcome barriers to exercise is by dancing in their homes.

Whether itâ€™s cold outside or a family is concerned about safety outdoors, dancing can help them get fit, says Helena Sugano, parent support coordinator for Mujeres Latinas En AcciÃ³n.

Sugano runs parenting classes in Pilsen at Mujeres Latinas En AcciÃ³n, 2124 W 21st Pl., where she advises Latino mothers and fathers about how to strengthen their relationships with their children by doing activities together.

Even something as basic as taking a walk can improve a familyâ€™s health, Sugano says.

A pilot program on theÂ city’s North Side 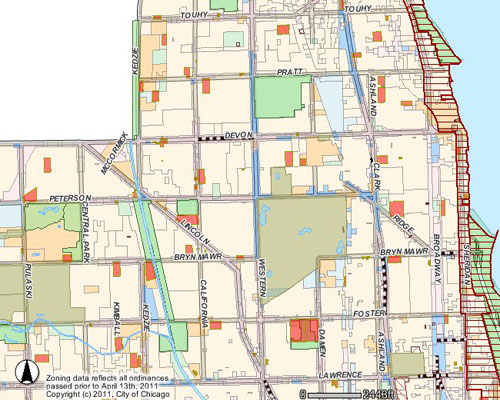 Unlike Latino neighborhoods on the city's near southwest side, North Side neighborhoods like Rogers Park tend to have more open space per resident. This zoning map of the area surrounding Centro Romero indicates there are more parks (represented by green spaces) in Rogers Park compared to the above map of Little Village.

When warm weather hits Chicago, RocÃ­o LÃ³pezâ€™ three kids donâ€™t want to stay inside to watch TV or play video games. Instead, her 10-year-old daughter and 9 and 6-year-old sons play games outside with other kids who live on their block in Rogers Park on the cityâ€™s north side.

But during the rest of the year, LÃ³pezâ€™ kids donâ€™t exercise regularly.

For many families living on limited incomes, fitness programs and recreational sports teams can be too expensive.

â€œWhen you have three, four, or five kids, itâ€™s really hard to pay out of your own pocket,â€ says LÃ³pez.

Until last fall, LÃ³pezâ€™ kids were enrolled in a free martial arts class through the Childhood Health and Wellness Initiative at Centro Romero. The pilot health program focused on the early intervention and prevention of childhood obesity before it ended in October 2010, says Susana Salgado-Aparicio, leadership trainer at Centro Romero, 6216 N. Clark St.

Transitioning to life in the U.S. often prevents Latino immigrants from having time to be health conscious, Salgado-Aparicio says.

â€œPeople in the immigrant community came here to find a better life,â€ she says. â€œTheyâ€™re more focused on putting food on the table.â€

Since the Childhood Health and Wellness Initiative ended, LÃ³pezâ€™ kids donâ€™t get much exercise until the summer because she canâ€™t afford to enroll all three of them in an exercise program or a sport, she says.

â€œThese programs really are important,â€ LÃ³pez says. â€œSometimes itâ€™s the only way to do exercise.â€

Now that the weather has warmed up, LÃ³pez says she plans to walk her three kids to Hayt Elementary School every morning instead of driving them. The walk should take less time as they get fitter, she says.

On the southwest side of the city, communities like Humboldt Park are trying to make outdoor exercise more viable, Rebecca Calendo says.

By the time of Amor de Diosâ€™ last free Zumba class on May 25, Magali Moreno had not been able to secure the funding needed to continue the free program.

But the 45 people who attended the last Zumba workout decided they wanted the activity to live on, and they were willing to donate a few dollars at each class to make it happen, Moreno says.

â€œItâ€™s a big switch in perception,â€ Moreno says excitedly. â€œThat was the goal. To have the class self-sustained.â€