Is the South Asian vegetarian diet bad for the immigrant heart? 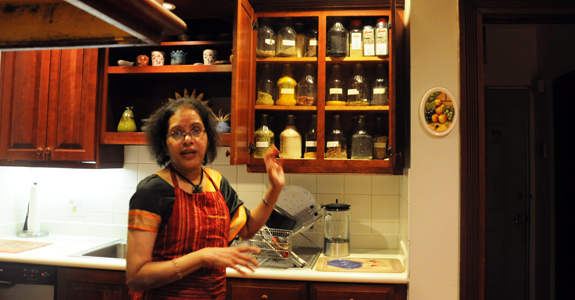 Ranjana Bhargavaâ€™s kitchen embodies the flavors of South Asia. Rainbows of turmeric, coriander and chili pepper fill a set of round metal masala (spice) boxes. A second set of boxes for chai (tea) are filled with cardamom, cinnamon and mint. Fresh paneer (cheese) and raita (yogurt) sit on shelves of her oversized fridge. An entire cabinet is devoted to varieties of daal (lentils).

Bhargava has taught cooking classes across Chicago for more than 30 years. Upon first glance, or even after an elaborate multi-course meal, few realize what makes the Hyde Park residentâ€™s cuisine truly noteworthy. The guiding principle behind each dish Bhargava prepares, using cast iron pans she brought from India when she immigrated to Chicago 44 years ago, is health.

Millet, quinoa flour and flax seeds comprise her version of rotti (flatbread), which she rolls paper thin using half the normal amount of dough. Bhargavaâ€™s palak paneer (a spinach and cheese dish) includes kale and broccoli for added nutrients. She emphasizes protein in every dish, chooses fresh rather than canned vegetables and rarely uses gee (butter).

Five years ago, Bhargava realized something few vegetarian South Asians ever consider. Her meatless diet did not guarantee she was eating healthily. South Asians globally suffer from heart disease at rates up to four times those of the general population. Modifying diet and increasing exercise can limit the communityâ€™s widespread malady.

Researchers at the University of California – San Francisco and Northwestern University have joined forces to conduct the first long-term, population-based study of heart disease in the South Asian community, known as the MASALA study. The research, funded by the National Heart Lung and Blood Institute, seeks to understand the communityâ€™s preventable risk factors of heart disease.

â€œPeople were really focused on the relationship between stress and heart disease,â€ says Dr. Namratha Kandula, principal investigator of the MASALA research at Northwestern University. â€œThey werenâ€™t even thinking about the other risk factors.â€

Other than diabetes, South Asians do not demonstrate high incidence of any indicators of heart disease such as smoking tobacco, high blood pressure, obesity, or alcohol consumption. Due to the exceptional nature of this phenomenon, researchers are currently exploring the potential genetic predisposition of South Asians towards heart disease. Dr. Rambha Radhakrishnan, a volunteer physician at the Indian American Medical Association, estimates that half of the South Asian patients who come to the free clinic suffer from diabetes, the only indicator of heart disease that South Asians suffer from at above average rates.

According to the World Health Organization, heart disease is the greatest cause of death worldwide. Each year, more than 17 million people die as the result of cardiovascular (heart) disease. Despite making up only around 20 percent of the world population, South Asians (Indians, Pakistanis, Nepalese, Sri Lankans and Bangladeshis) account for 60 percent of heart disease patients. If the community wishes to overcome its uphill battle with heart disease, adaptations to the beloved traditional cuisine, like Bhargavaâ€™s, must become commonplace.

To address the low awareness among South Asians of the preventable risks of heart disease, Dr. Kandula is focusing on educating the community about preemptive behaviors. Diet, physical activity and weight management play key roles in curbing the disease. During summer 2010, her team ran a series of informational sessions, in English and Hindi, for interested community members on Chicagoâ€™s north side at the Metropolitan Asian Family Services and Asian Health Services. Through health education and lifestyle intervention, the team hopes to explain how to change these risky behaviors.

â€œThereâ€™s a popular misconception that vegetarians donâ€™t have to watch what they eat because being vegetarian is more healthy,â€ says Sara Glass, the nutritionist on Dr. Kandulaâ€™s team. â€œIf youâ€™re vegetarian, it doesnâ€™t mean youâ€™re healthy or that youâ€™re not at risk for heart disease.â€

The team showed participants a well balanced dinner plate, one-half filled with fruits and vegetables, one-fourth filled with carbohydrates (bread or rice) and one-fourth filled with protein. Routinely, participants were shocked by how little rice or chappati were on the ideal plate. Just like in Bhargavaâ€™s kitchen, the team encourages baking rather than frying samosas, not overcooking vegetables to the point they lose their vitamins and adding less salt to food.

Acknowledging it can take time to adjust to these healthier adaptations, Glass encourages a gradual transition from white to brown rice by mixing the varieties half and half. Prepackaged spice mixes can be dangerous because they come already mixed with a lot of salt. By not keeping a salt shaker on the dinner table, the temptation is gone to put additional salt on already seasoned meals.

â€œPeople are okay with modifications and ideas, but it has to taste good,â€ says Dr. Kandula. â€œIt takes time in the beginning when you add less salt to your food, but they seem open to that. Open to things like portion control. Thatâ€™s basically taking South Asian foods and rearranging them.â€

When Bhargava cooks for other South Asians, she doesnâ€™t tell that her food is healthy. â€œIf I serve it appetizingly, they donâ€™t know,â€ she says, admitting that people look at her strangely when she tells them about her cookingâ€™s nutrition. She uses julienne carrots and radishes or mandarin oranges to garnish her dishes. â€œI know if I put oil and put a lot more masala, it will look better,â€ she says. â€œSo I need it to look pretty enough for people to say, â€˜Iâ€™ll eat it.â€™â€

Binny Christian stopped eating fried, fatty foods and reduced her portion sizes after her brother suffered a heart attack at age 40 in 2000. When Christian participated in Dr. Kandulaâ€™s healthy living program last summer, her greatest takeaway was to get more exercise.Â  â€œI wasnâ€™t doing exercise and I wasnâ€™t walking,â€ she says.

In Chicago particularly, many South Asian immigrants struggle to stay active. Â Chicagoâ€™s cold winters and a dependence on cars and buses keep many South Asians locked up in doors. â€œWeâ€™ve forgotten how to exercise,â€ says Bhargava. â€œWhen we were in India we sat on the floor and cooked; so a lot of up and down. The women donâ€™t get much exercise now.â€

The team developed a series of informational videos to increase healthy behavior. The videos recommend walking briskly while doing errands rather than driving or taking the bus, taking the stairs instead of the elevator and going on walks with family or friends rather than watching TV.

An active adult should walk 10,000 steps each day. As part of the heart disease prevention curriculum, Dr. Kandulaâ€™s team distributed pedometers to participants. Some people were walking less than 3,000 steps a day. As a group, they focused on achieving the goal of 10,000 daily steps.

Almost a year after completing the program, Christian still wears her pedometer. Sheâ€™s gradually increased her daily aerobic exercise from ten minutes to half an hour. â€œEvery week Iâ€™d do five or ten minutes more,â€ she says. â€œAfter that, it became a habit to exercise.â€

The six-session curriculum is taught by physicians, medical students, pharmacists, diabetes educators and psychologists. The lessons emphasize the same two behaviors to manage diabetes as Dr. Kandula recommends to prevent heart diseaseâ€”modifying diet and increasing exercise. Dr. Radhakrishnan hopes patients will understand how to best manage their conditions. â€œThe physician can do only one third and thatâ€™s the medication part,â€ she tells diabetic patients. â€œYou must complete that with medication, diet and exercise to control your condition.â€

Looking towards the future

Since completing the educational pilot, Christian talks with other Indians about the importance of maintaining a healthy lifestyle. Christian, who immigrated to Chicago from India in 2009, Â believes that Indian women are too preoccupied to think about their own health. â€œI never went to any doctor until I was sick,â€ she says. â€œIndian women bother about their families, not themselves. They think they are for their family.â€

Another aspect of Dr. Kandulaâ€™s research examined health perception among South Asian immigrants in Chicago.Â  Eighty percent of respondents believed eating right was central to health and 75 percent said the same of exercise. When it came to explaining disease causation, lower rates of respondents attributed diet and exercise, responding affirmatively at 59 and 24 percent respectively. This indicates that while South Asians connect diet and exercise to their general health, they do not necessarily understand the potential gravity of the two behaviors.

Building on a long career in social work in the Chicago area, Bhargava is part of an initiative to build a healthier Chicago. She teaches healthy cooking at the Indian American Medical Association and teaches low-income children about obesity prevention with an organization called Common Threads.

â€œDoing this has made me realize what is right and what is wrong,â€ Bhargava says of her teaching experiences. â€œYou begin to see that there are diseases that are creeping up here. There are skin diseases, there are heart attack, diabetes, all of that. So that is making me change.â€

After reforming her own behavior, Bhargava admits that developing a discipline is the most challenging part of healthy eating. â€œPeople need to know that what they eat is not the medicine. What they eat is nourishment, and if they can watch their nourishment, they are living a healthier life.â€