Sai Khon: Warrior of peace for the Shan people 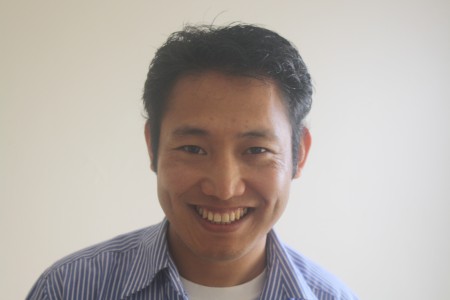 Sai Khon almost always wears a gentle smile as he talks. The 30-year-old sits at the small kitchen table in his Rogers Park apartment speaking softly about his past, present and future as a Burmese refugee. His wife, No Neih Lam, bustles in the kitchen preparing a meal for herself and the 18-month-old boy on her hip.

Sai, No Neih and their son, Sai Khun Pain Pha, arrived in Chicago one year ago this June. Sai is settling in. He was 3 or 4 years old when the Burmese Army first forced his family to move from the village where Sai was born to another village and then another, and another. By the time Sai finally fled Burma at the age of 24, he had lived in five or six villages.

Sai hails from the Shan State of Burma, one of the country’s fourteen provinces and home to the Shan people, who have been engaged in civil war with the Burmese government for decades. Not that Sai or his family were ever involved in the fighting; growing up as the son of orange farmers, Sai had no ambition other than to farm like his father. The Burmese government had other plans.

“Because they think that the villagers are helping the resistance army, the rebel groups, they wanted to combine villages together so they could have better control over the villages,” Sai explains, his trademark smile evaporating. “This is hard for us because we have our own farms and if we all move into the same place – ten or twenty or thirty villages all moving to the same place – what places are you going to find to farm?”

His family did their best to farm small plots of land, but hunger was inevitable and Sai witnessed death at a young age. “You move one people to a different place where they don’t get work, they don’t have jobs, how are they going to survive? They’re going to die eventually.”

In 2005, Sai made the decision to leave his family and Shan State behind and pursue a better future in neighboring Thailand. “Finally the only option to escape slaughter and oppression was to flee,” Sai says. “I was already an adult – I was 24 or 25. There was kind of like a broker, someone who helped arrange the transportation. We came in Thailand around Christmastime. The situation was relatively better, but we had to be afraid of the Thai police.”

The Thai police were Sai’s new oppressors, repeatedly raiding apartment buildings and workplaces to arrest illegal immigrants, of which Sai was one. After 10 months of construction work, four months working in a gas station and repeated arrests, Sai had had enough. He’d heard that job opportunities were better in Malaysia, so in 2007 he left Thailand behind and moved to Kuala Lumpur.

“It was a little better in Malaysia because it was easier to negotiate with the Malaysian police,” Sai says. “If you get arrested, you can negotiate, and if you don’t have money you can still give 10 or 20 ringgets [$3-6 USD] to the Malaysian police and they’ll let you go. If you get arrested by the Thai police they’ll ask for big money, like 3,000-4,000 Thai bahts [$100-130 USD]. If you can’t pay them, then they put you in jail.”

But Sai no longer had to worry about the police after he sought out the help of the United Nations High Commissioner for Refugees (UNCHR), which provided him with papers stating his legal right to live and work in Malaysia. Sai also made a good friend in Kuala Lumpu, a fellow Burmese immigrant, No Neih Lam, who had fled conflict in her native Chin state. After Sai’s arrival in Kuala Lumpur No Neih helped Sai find work and let him stay in her apartment until he could afford to move into his own. Eight months later, Sai received a call. No Neih had lost her job.

“She had helped me, so I wanted to do the same for her. I took her to my boss. I was working at a Chinese restaurant but No Neih could not speak Mandarin and they did not like her. I let her move in with me, because she could not afford her apartment anymore.”

While No Neih eventually found work, she continued to face arrest and harassment by the Malaysian police, as she was undocumented. Sai’s gentle smile broadens to a grin as he tells the story of the first time he rescued No Neih from jail by lying to the police that she was his wife. “She wasn’t my girlfriend at this time,” he laughs.

From their fake relationship, a real one blossomed, and Sai Khon and No Neih Lam were married in Malaysia. When they began to discuss their future, it became clear that they had vastly different goals.

“I wanted to go back and serve my country at first, maybe join the army, because I had seen the human rights violations in my state and I wanted to do something for my people. That was my first intention. But later on she wanted to come here badly and I decided to follow her.”

Sai’s voice takes on a regretful tone. “We never thought of coming to America at first. The day we found out that we were eligible to reapply for resettlement to America, my wife and I, we were having a discussion, and she wanted to come here.”

No Neih’s desire to emigrate to the United States prevailed over Sai’s desire to return to Burma and on June 8, 2010, the couple and their baby son arrived in Chicago. After months of unemployment, Sai has finally found a part-time job as a mechanic in an auto body shop. While he is careful not to seem ungrateful for this opportunity, Sai sounds less than enthused.

“First, the job is kind of a little far from here, and second, they don’t offer me many hours or a good salary. It’s not that I’m not happy with the job. But my ambition is to study as much as I can here, to have a goal. Someday maybe we can go back and contribute back to our people back in Burma. Unlike my wife, she wants to settle down here and live a happy life here, but for me I want to go to school and get higher education so I can give back.”

Sai grows animated whenever he speaks about his dream of returning to Burma to help the Shan. He emphasizes that he originally wanted to join the Shan State Army. “That was my first thought, because liberating our people from tyranny is our first priority to do other developments in our country,” he says.

But after reflecting on the size and strength of the Burmese Army, Sai has realized the futility of using force and now dreams of working for an aid organization in Burma. “You help the people who are fleeing the war and in the meantime you are also telling the stories throughout the world. ‘This is what is going on and this is why I’m here. This can be more effective, more useful than fighting directly,” Sai says. “There are NGOs based in Thailand or near the border I can contact. Right now I will study a little bit more.”

Sai refers repeatedly to the education he hopes to receive in the U.S. He is working on his English, taking classes at a local center. His hard work shows: sometimes he does not even wait for the interpreter to translate a question from English to Burmese before he begins to answer. Sai also hopes to learn more about human rights and international affairs, all with the intention of spreading the word about his people’s suffering and returning to Burma to help.

Sai has a message and a mission

Blissfully unaware of this suffering is Sai Khun Pain Pha, a happy, noisy 18-month-old boy who shrieks and giggles as his mother totes him around the small apartment. As Sai is speaking, No Neih prepares to go to church, then leaves with the baby and a wave goodbye. 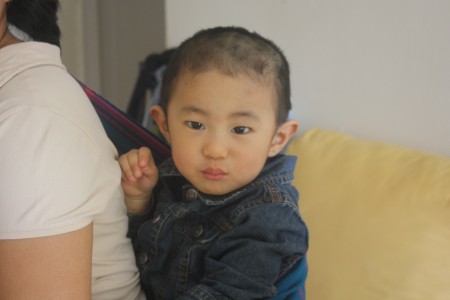 No Neih is Christian, while Sai is Buddhist. Although churches abound in the neighborhood, Sai can’t find a temple within walking distance. But he wears permanent reminders of his faith on each forearm: traditional tattoos done by a Buddhist monk when Sai was seven years old. On his right forearm, crossed swords represent the strength of the Shan people. On his left forearm is script that roughly translated means “God’s grace” or “God’s love.”

“Shan people believe that if you are a real Shan you must have some kind of tattoos on you,” Sai explains. “They mix the ink kind of like a medicine, like they believe it’s protective medicine; if you fight in war you will be protected.”

Will his son get tattoos as well? Sai doesn’t think so. “I don’t know if you can find this kind of 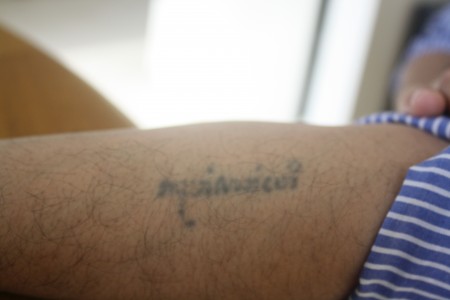 This script translates as “God’s grace” or “God’s love”

The swords on his arm seem to clash with his easygoing nature, but it is clear that Sai has a mission. He knows that, for now, his responsibility is to his wife and son, but his heart is in Shan State.

“I’m going to be working, my child’s going to grow up, and once I know they can be on their own here, then I can do my own things,” he says. “I have to do something to protect our people, to protect our heritage. I want to let the world know: This is what’s going on in Burma.”