Alham Hasan: Kidnapping, kidney failure and one woman’s life as a refugee 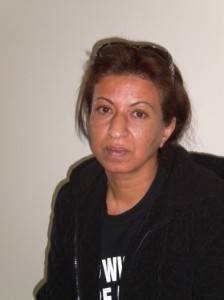 On the afternoon of July 12, 2007, Alham Hasan received the phone call no wife ever wants to answer. A relative called her in Jordan to tell her that her husband had been kidnapped in Iraq. The kidnappers offered an ultimatum: $50,000 in ransom, or they would kill him.

Because she started screaming and crying, her three children knew immediately what had happened, she says.

Hasanâ€™s husband Salah worked as a driver bringing people to and from Iraq from their adopted home in Jordan.Â  After the kidnappers stole his car and held him in captivity, they called his uncle to secure the ransom.

â€œIt was like having a funeral without the body,â€ Hasan says.

This was just one incident in a long line of many that threatened the familyâ€™s security. Hasanâ€™s troubles began in Iraq four years before her husbandâ€™s capture and continue until today as she suffers from kidney failure and struggles to raise three children, sick and alone, in the United States.

One morning Hasanâ€™s two sons, Saif and Mahdi, were evacuated from their school in Baghdad. Minutes later, they watched as a bomb destroyed part of the building.

Two days after the school bombing, Hasan took her two-year-old daughter, Layla, to the bakery. On the way she noticed three men with guns watching her. After she paid for some pita, the grocer advised her to take her daughter and run home. When the three men started to follow her, she threw the bread, picked up Layla and ran. One of the men tried to force open the door after she had gotten inside the apartment building. She managed to slam his fingers in the door and get up to her apartment safely.

For Hasan, that was enough. She packed up their bags and the family left for Jordan the next day. They traveled through Syria and met her husband Salah on the Jordanian border. Salah was already in Jordan because he had been visiting his sick mother.

Hasanâ€™s mother and six brothers still live in southern Iraq. All of her brothers are married, she says, and the cost to bring their families over to the U.S. is too high. In addition, Hasanâ€™s mother is sick with cancer.

Now in the U.S., she keeps in contact, but with her battles with kidney failure, she sometimes finds it hard to talk to them. If she is in the hospital for dialysis when they call, she will not answer, she says.

The family lived together in Jordan for six years. Hasan sent her children to private school because they weren’t allowed to attend public school.Â  Layla recalls going to a park almost every day with her dad.

Hasanâ€™s husband began working as a driver in 2005. When he was kidnapped, her son Mahdi panicked and tried to find ways to make money for the family. He began selling Coca Cola during and after school.

â€œTheir father was their source of money,â€ Hasan says. â€œHe [Mahdi] just thought of a way to get some kind of money.â€

Hasan found a job through the United Nations and asked family members for help with the ransom money. At the same time, she applied to the International Organization for Migration (IOM) to see if their family could leave Jordan for the U.S.

For two months, while her husband was being tortured, she pushed her children to keep on living as normally as possible.

â€œI made my kids go to school,â€ she says. â€œWe were just waiting.â€

When they paid the ransom to the kidnappers, her husband traveled with family members from Iraq back to Jordan. Hasan took him to the IOM office to meet the people working on her case.Â  Her husband was not over the shock of what he’d endured during those two months, she says.

A few months before she left for the U.S., her doctor in Jordan told her that her kidneys were failing. She had gone to the doctor because she had not been feeling well, but thought the pains were due to pregnancy.

Even today, she does not know the cause for her kidney failure.

â€œItâ€™s probably from all of the shocks I had at the time,â€ she speculates.

The doctors encouraged her to get full treatment when she reached the U.S. because she could receive better care.

With her husband in captivity, Hasan had applied without him to the IOM. So when it came time for the family to leave, Salah could not leave Jordan with them. The IOM encouraged Hasan to file an I-130 Petition for Alien Relative when she got to the U.S. to help get him there.

â€œHe could not finish the way to the airport,â€ Hasan says. â€œHe went back because he was crying for leaving us.â€

On April 20, 2009, Hasan and her children arrived in New York and were then resettled in Lexington, Kentucky.

Hasan had a miscarriage shortly after they arrived in the U.S. She could, however, receive federal assistance for her kidney-related medical treatment because of her refugee status. Her Medicaid covers dialysis and will cover surgery if she were to find a donor.

After a year and two months in Lexington without friends or close contacts, Hasan decided to move the family to Chicago.

After dropping off Saif, 16, and Mahdi, 15, at Mather High School one morning, Hasan totaled her car. She had been in a rush that morning and had forgotten to take her blood pressure medication. The broken thumb she walked away with after the accident is just one vestige of the fallout from her kidney failure.

Hasan spends three mornings a week in the hospital for dialysis. Sometimes she has to spend the night in the hospital, leaving her children at home for the night. Layla, now 11, says she helps with the cooking and her brothers help with shopping and other chores because their mother is gone so much.

A couple months ago, Hasan decided it might be better to go back to Iraq to find a donor and have surgery. Nada Alkadar, director of Uruk Human Services in Chicago, advised her against it.

â€œIf she will go from United States, through Turkey, through Jordan, until she reach Baghdad, it will take more than three days,â€ Alkadar says. â€œThis is very dangerous for her health.â€

Hasan was insisting to go, Alkadar says, because she was still on the waiting list for a donor. Hasan was told she could be on that list for the next two to seven years. In the meantime, she has suffered from blood infections, high fevers, and has had to deal with less direct side effects, like the car accident.

â€œWhat we need [is] a voice to help this single lady find a quick donor for her so she can live,â€ Alkadar says. â€œSheâ€™s a survivor.â€

As Hasan’s husband continues to fill out paperwork to join his family in the U.S., Hasan completes forms to qualify for home health care. Husband and wife live from phone call to phone call.

Hasan is hopeful that he will be here soon. â€œBy the will of God,â€ she says.Â  â€œInshaâ€™Allah.â€