Ring Thang Cangmah: Burmese refugee and the waterfalls of Montana

With a soft smile, Ring Tang Cangmah asks his brother, Timothy, to put in the CD to show what he canâ€™t describe in English. â€œThe DVD will perfectly explain,â€ he says, eyes still fixed on the television as it changes from the soccer game to the start of a Burmese gospel music video. â€œThis,â€ he says, â€œis why I want to go to Montana. It reminds [me] of Bungtla in my Chin State.â€ 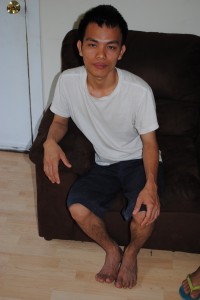 Ring Thang Cangmah in his home in Chicago. (Photo by Jeremy Intal)

Ring Thang, a 24-year-old Burmese refugee and avid soccer fan, first thought about moving to the United States when his uncle told him about the possibility of leaving the political oppression that silenced most Burmese citizens.

â€œSometimes the police just took your chickens or your rice or made you pay money for no reason,â€ Ring Thang recalls. He never knew anyone who was jailed, but he heard enough stories to know he wasnâ€™t safe in Chin State, or anywhere else in Burma.

â€œThere was no freedom there,â€ Ring Thang says but he hadnâ€™t yet decided to risk a journey to Malaysia where the UNHCR had organized a refugee resettlement camp. There were still times when he could play soccer with his friends and enjoy the beauty of Bungtla, the most popular waterfall in Chin State.

In Burma, many of the men and young boys were ordered to do tasks for the police, what Ring Thang calls â€œgoing to porter.â€ â€œWhen called for porter, we have to carry food, guns, and bombs for police with no pay,â€ Ring Thang says.

Forced labor, mistreatment, and extortion, especially of the Chin people by the Burmese army and government are not uncommon. In fact, a Human Rights Watch report from 2009 focuses on the violations occurring in the Chin state.

A few days later, Ring Thang went to say goodbye to his parents and made the journey to Malaysia with his wife, two brothers, and his two-year-old son, Stephen. 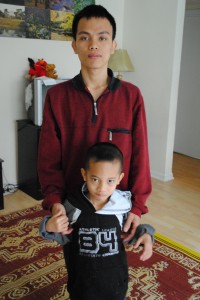 Ring Thang with his son, Stephen. (Photo by Jeremy Intal)

For ten days, Ring Thang and his family trekked through hot, dangerous Burmese jungle. â€œWe got up at 7 at night and we go through the forest. We sleep at 6 in the jungle in the morning because it was dangerous to travel in the day,â€ Ring Thang recalls. â€œThere was police everywhere.â€

Ring Thang marvels at how many people were in one car on the way to Malaysia. â€œAt least 12,â€ he says. But the one thing he was sure of was that Burma couldnâ€™t be home anymore.

Once safely in Malaysia, Ring Thang found immediate relief. There were churches, other Burmese refugees, and plenty of jobs in Kuala Lumpur, the capital and the center of the UNHCR resettlement camp.

[Audio: https://immigrantconnect.medill.northwestern.edu/wp-content/uploads/2011/06/Works-in-Malaysia.mp3] Ring Tang looks back fondly on the electrical cabe work he did in Malaysia

Shortly after arriving in Malaysia, however, Ring Tang Cangmah fell ill with Hepatitis B.

With barely any money, Ring Thang didnâ€™t know what to do. He spent two months in the hospital with medical payments piling up.

Thatâ€™s when San Lin offered to pay for the medical expenses. â€œI had no money and he paid for the hospital,â€ Ring Thang says. â€œHeâ€™s my best friend.â€

After a slow recovery, Ring Thang and San Lin, spent a majority of their free Sundays, their only day off from work, together.

Ring Thang recalls how he used to spend time with San Lin outside of work.

[audio:https://immigrantconnect.medill.northwestern.edu/wp-content/uploads/2011/06/Living-Together-and-watching-soccers.mp3|titles=Living Together and watching soccers] It was all about soccer

â€œI was midfielder and San Lin was defender,â€ Ring Thang mentions, as the English Premier League game continues to play in the background of his Chicago apartment. When they had the money, Ring Thang remembers, they would go out to their favorite Chinese restaurant and talk soccer. Liverpool was their adopted EPL team.

But memories like these donâ€™t make Ring Thang too nostalgic. They excite him about the prospects of exploring more of America and sharing more memories with family and friends like San Lin once they come to the U.S. 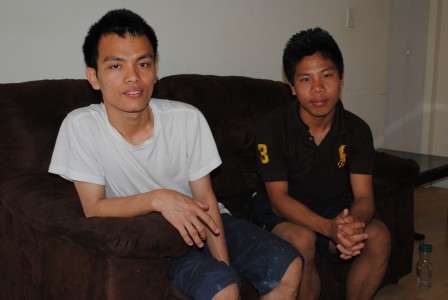 â€œHopefully San Lin will be here in a year,â€ Ring Thang says. â€œThen I will show him downtown and the lake.â€ Downtown, the Trump Hotel and the Art Institute of Chicago are the biggest draws for Ring Thang. â€œHere the buildings are so nice. Not like Malaysia. Malaysia has too many condominiums,â€ he says jokingly.

Ring Thang and Timothy are already planning to visit other friends they met in Malaysia who are now scattered across the U.S. Once he can afford the trips, he hopes to visit friends in North Carolina, Maryland, and Texas, among others.

Itâ€™s friends and family like San Lin that Ring Thang misses, not the politics.

Burma has faced decades of conflict and internal struggle, exacerbated by a military coup led by General Ne Win in 1962. The coup effectively dissolved the political order created under Prime Minister U Nu. Since then, Burma has experienced mass demonstrations, political upheaval, and a deteriorating economic situation. United Nations envoy Tomas Ojea Quintan was recently quoted as stating that Burma remains one of the few countries where violations, like forced labor, are state-sponsored.

Now what seems like a world away, Ring Thang works at a cosmetics company supporting his wife and two sons. They’ve been in Chicago less than a year.

As for a return to Burma? Ring Thang wonâ€™t go back to Burma until he gets his citizenship.

â€œMaybe Iâ€™ll go back after 10 years, but Iâ€™m not sure,â€ Ring Thang says. He adds that he rarely thinks about going back to Burma. â€œOnly to see family,â€ Ring Thang emphasizes, referring to his mother and father. â€œI have Google Talk so I can talk to family and friends,â€ Ring Thang says. â€œSometimes San Lin calls me so itâ€™s nice.â€ Finding the time to catch up at least once a month, Ring Thang knows San Lin now owns a video game shop in Malaysia and is recently married.

For now, Ring Thang is excited to be in Chicago because he finds many ways to connect to the past. Ring Thang plans to go back to school and continue working with electrical construction as he did in Malaysia.

Ring Thang does not brag about the five languages he can speak, which include Rakhine and Malaysian. Instead, he acknowledges how much he still has to learn about English. â€œHopefully I have late shifts so I can go to school in the morning,â€ he says. For the time being, Ring Thang is enrolled in the English as a Second Language Program (ESL) at Truman Community College. â€œMore English, more education is the most important thing,â€ Ring Thang says.

[audio:https://immigrantconnect.medill.northwestern.edu/wp-content/uploads/2011/06/I-can-get-any-jobs.mp3|titles=I can get any jobs] He believes that with hard work, he’ll have a chance

â€œAnd with a better job, I will be able to repay San Lin for his kindness,â€ Ring Thang says hopefully.

Though still adjusting to the language and lifestyle in America, Ring Thang is enjoying the transition. â€œI consider Chicago more of a home. Here is freedom. There is no freedom in Burma,â€ Ring Thang repeats.

Of course, there are things Ring Thang will always miss. â€œWe drink from the mountains so itâ€™s natural water. Itâ€™s so clean in Bungtla,â€ Ring Thang recalls. Yet Ring Thang has been able to find the past in the present. This is the reason he wants to go to Montana.

With over 120 waterfalls in Montana, Ring Thang isnâ€™t sure which one it is he saw on an advertisement in Burma. But it seems like he will know which one it is when he sees it. â€œMontana waterfall is just like Bungtla,â€ he says.

[audio:https://immigrantconnect.medill.northwestern.edu/wp-content/uploads/2011/06/Visiting-Montanaas.mp3|titles=Visiting Montanaas] Ring Tang yearns for the waterfalls of Montana

With many things in America that remind him of home, Ring Thang never feels too far from loved ones.

Looking towards the future does not mean forgetting about the past for Ring Thang. Itâ€™s the ability to hold onto the important things, even if they are far away.

For now, soccer, waterfalls, and Google Talk are good enough placeholders until Ring Thang reunites with his family and friends, wherever they may be.