Here’s how Khadga Darnal identifies himself in English, a language he barely speaks. 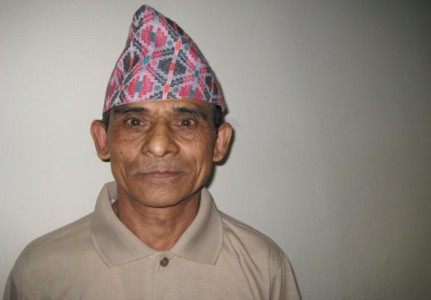 Khadga Darnal is a Bhutanese refugee who resettled in Chicago with his family three years ago. (Photo by Miranda Viglietti)

Khadga Darnal begins to twirl in a circle to the beat of the madal drum as he plays the clip of a maruni dance from the Nepali movie â€œBandakiâ€ on his family computer. Darnal stretches his arms into the air, waving his hands in time to the rhythm of the song.

The 64-year-old Bhutanese refugee uses the computer to connect with his Nepali culture. Even though Darnal canâ€™t read or write in eitherÂ Nepali or English, his 8-year-old grandson Divas taught him how to find Nepali films and music on YouTube.

When he was younger, Darnal participated in maruni by dressing in womenâ€™s clothes and ornaments while dancing with the madal drum. Even though he no longer does the traditional Nepali dance, Darnal still loves maruni. Watching it makes him feel happy.

[audio:https://immigrantconnect.medill.northwestern.edu/wp-content/uploads/2011/06/Clip-2.mp3|titles=Clip 2] Darnal explains in Nepali that maruni is part of Bhutanese culture and that heÂ participated in the dance six times while he lived in Nepal.

When Darnal came to America in June 2008 with his wife Mangali and daughter Khina, they were one of the first Bhutanese family to be resettled in Chicago by Catholic Charities. The Darnals, who are ethnically Nepalese, spent 16 years living in the Sanischare refugee camp in the Morang district of Nepal after they were forced to leave their home in Bhutan.

Darnal says he loved his familyâ€™s beautiful home in Chirang, Bhutan. The Darnals lived in a two-story stone house out in the country, where they kept an orange garden and cultivated crops like rice and corn. They also raised a few cattle.

For three years, Darnal worked for the Bhutanese governmentâ€™s road department so his oldest son Tek could attend school. This meant Darnal had to live alone in the northern part of the country away from his family.

â€œThat is his great sacrifice,â€ says Tek, 34,Â who learned to speak English at school.

Darnalâ€™s ancestors were originally from Nepal, which is located west of Bhutan. Both countries are situated between China to the north and India to the south. The family settled in a scarcely populated area in southern Bhutan so the land could be cultivated.

As the population of Nepalese immigrants grew, Tek says the government tried to force them to practice Bhutanese culture in the 1980s by burning Nepalese literature, closing Nepalese schools and requiring citizens to wear Bhutanese clothing. When the Nepalese people tried to petition against these changes, the Bhutanese king sent his army to raid dissenting villages.

As violence escalated against the ethnically Nepalese people, the Darnal family was forced to leave Bhutan in 1992 and move to the Sanischare refugee camp set up by the UNHCR. 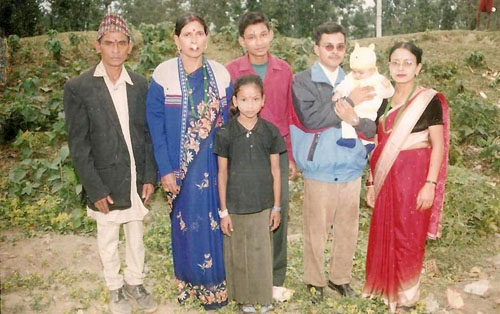 This picture of the Darnal family was taken in 2002 just outside of the Sanischare refugee camp in Nepal. (From right) Khadga Darnal, his wife Mangali, his daughter Khina, his son Sha, his son Tek, his grandson Divas and his daughter-in-law Nar.

After leaving their stone house in Bhutan, Darnal and his family lived in a cramped bamboo hut at the Sanischare camp. They took with them no photos of the home and have not been back ever since.

â€œIt was a tough life over there,â€ Tek says, recalling how the local Nepali people oppressed the refugees from Bhutan and treated them like they were nothing.

Despite their Nepalese ancestry, refugees who fled Bhutan were denied Nepali citizenship and were prohibited from living and working outside of the UNHCR camp, Tek says.

â€œNepal was never our home because we were in the restricted camp,â€ Tek says. â€œWe were not given any rights that a human being should have.â€

The Darnal family had hoped to go back to Bhutan one day, but the political situation made it impossible, Tek says.

When the Darnals learned they could move out of the refugee camp and resettle somewhere else, they Â took advantage of the opportunity to finally have a country to call their own, Tek says.

â€œI [thought] we were going to live there forever,â€ says Khina, who was born in Nepal and has never been to Bhutan.

[audio:https://immigrantconnect.medill.northwestern.edu/wp-content/uploads/2011/06/Clip-3.mp3|titles=Clip 3] Darnal talks in Nepali about the importance of teaching younger generations about their Bhutanese and Nepali cultures. He says itâ€™s difficult for younger family members to maintainÂ their culture in America, so he tries to teach them about it at home.

Darnal sits in a chair pushed back from the dining room table, with his feet cross-legged and his sandals kicked off on the floor.

He laughs as he recalls how his case manager fromÂ Catholic CharitiesÂ took him outside and played with him in the snow during his first winter in Chicago.

[audio:https://immigrantconnect.medill.northwestern.edu/wp-content/uploads/2011/06/Clip-4.mp3|titles=Clip 4] Darnal describes what it was like when he first came to Chicago, alone and with literally no knowledge of English.

There were not many Bhutanese people Â in Chicago when Darnal first came to the city. He says he felt stressed and sad leaving behind all of his relatives in Nepal.

Because Darnal and his wife Mangali knew no English, their teenage daughter Khina spoke to the case managers on their behalf. Darnal says he still worried about his family and felt lonely.

He began adjusting to life in America after his sons and other relatives began moving to Chicago. Although he has learned some English, the language barrier makes it hard for Darnal to work in America. Instead, he looks after his familyâ€™s apartment in West Rogers Park and spends time with relatives and friends from the refugee camp in Nepal.

Darnal says he would like to become an American citizen, but he does not think it’s possible because of his language and literacy barrier.

[audio:https://immigrantconnect.medill.northwestern.edu/wp-content/uploads/2011/06/Clip-5.mp3|titles=Clip 5] He says he’s been in the United States three or four years and goes to school regularly. Still, he muses, his old brain can’t catch everything. He doesn’t know how to read or write, so how is he going to attain his main goal: getting citizenship?

Despite the barrier, Darnal says he isÂ glad to be in Chicago and part of a big community of people from the Nepali refugee camps.

Itâ€™s difficultÂ for refugee families like the Darnals toÂ celebrate Nepali festivals in Chicago, they say, because thereâ€™s often not enough space to perform cultural ceremonies. But, YouTube can often fill a cultural void by lettingÂ them hear and see Nepali songs and dances. Darnal says watching them never makes him feel sad. They make him happy.