Hasta Bhattarai: Finding hope after 16 years without a future 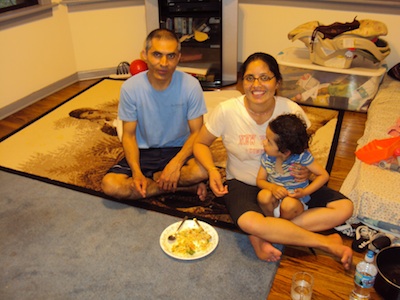 At 18, Hasta Bhattarai temporarily severed ties with his family. He did not leave in gleeful anticipation of college or a job or an apartment free from his parentsâ€™ restraints, like many 18-year-olds in the United States. Instead, he renounced his connection to them by signing a form forced on him by the Bhutanese government, his only option if he hoped to finish high school in his home country.

As Bhattaraiâ€™s family fled to a refugee camp in Nepal, he stayed at his boarding school in Bhutan for the few months he needed to graduate from high school. He tried to get permission to remain in the country for higher education as well, but the government, conveniently ignoring the form Bhattarai had already signed to distance himself from his family, denied his request on the grounds of his relativesâ€™ involvement in â€œanti-nationalâ€ activities. In Bhutan in the 1980s and ’90s, being â€œanti-nationalâ€ simply meant being of Nepalese ethnic origin, and the king was determined to expel from the country anyone who met that description.

[audio:https://immigrantconnect.medill.northwestern.edu/wp-content/uploads/2011/06/father-asked-to-leave.mp3] Bhattarai talks about how his father was asked to leave the country

Bhattarai joined his family at the camp in August of 1992 and spent the next 16 years there. Although he lived for almost as long in Nepal as in the country of his birth, he unequivocally considers Bhutan his home.

â€œOur forefathers were born in Bhutan,â€ Bhattarai says, where they had their dignity and honor and self-respect. “In Nepal we were confined to a camp and that camp did not give us very good honor. We were tagged as refugees. We didnâ€™t feel at home in Nepal. But we were bound to live there.â€

[audio:https://immigrantconnect.medill.northwestern.edu/wp-content/uploads/2011/06/bhutan-and-nepal.mp3] Bhattarai on why he will always consider Bhutan home

Just when his adult life was about to begin, a time that should feel replete with possibilities and excitement for the future, Bhattarai found himself stuck in the most hopeless of worlds. Refugees were not supposed to leave the camp, where they lived crowded in tents ill-equipped for harsh weather conditions. It was hard to find work, so they passed the time listening to the radio and playing cards or sports. Sometimes they gambled or drank.

[audio:https://immigrantconnect.medill.northwestern.edu/wp-content/uploads/2011/06/poverty-and-values.mp3] Bhattarai reflects on the effects of experiencing poverty, including the curse of forgetting how to share.

â€œThat life was very bitter,â€ Bhattarai remembers. â€œNothing was there for our future. Skilled, intelligent, creative people could not explore their potential or use their creativity. Bright students could not go for higher studies.â€

Bhattarai was one such bright student who managed to find ways around the restrictions imposed on him as a refugee. He got a job as a vice principal at a private school in Nepal that didnâ€™t require its employees to be citizens or hold an education degree. With the money, he paid his way first to a bachelorâ€™s degree and then a masterâ€™s at Nepalese universities, returning to the refugee camp for periodic stints as a teacher and coordinator at the school there.

Still, it was hard to escape the feeling that the education he worked so hard for would not go to use. In Bhutan, he says, his people suffered â€œintellectual tortureâ€ at the hands of the government, which would deny them jobs even when they were the most educated or qualified candidates. In Nepal it was the sameâ€”as refugees, it didnâ€™t matter how skilled or smart they were. They had no future, no place outside the camp.

They didnâ€™t let themselves think too far ahead, Bhattarai says. They lived in the present, just trying to survive from one week to the next. Sixteen years passed this way. For the first several years, they held out hope that they would be able to go home at any time. Bhattarai remembers a rally they organized in 1999, when hundreds of refugees marched to the border with Bhutanâ€”a monthâ€™s journeyâ€”only to be turned away and sent back to the camp. That was when it started to sink in that there was very little possibility of ever going back.

Bhattaraiâ€™s outlook during his years in Nepal followed a trajectory similar to that of many young adults, whose optimism is replaced by disillusionment as they grow older and let go of ambitions. This process takes on a particular poignancy for refugees because it is their very homes and pasts theyâ€™re forced to let go of.

â€œWhen I came (to Nepal), I was young, so I thought I could do something and I could go back home at any cost,â€ Bhattarai says. â€œThat was my heart saying to me. But in the course of time, things did not go the way they were expected to go.â€

Even after Bhattarai and his fellow refugees stopped seeing their return to Bhutan as an imminent possibility, they held it in their minds as a distant dream, a potentially happy ending for their lives that were unfolding as best they could in the static environment of the camp. Bhattarai married his Chandra in 2006â€”â€œquite a happy momentâ€ in the midst of dreary camp life. Just two years later, the future finally opened up when the couple found out they were going to Chicago to begin a new life.

[audio:https://immigrantconnect.medill.northwestern.edu/wp-content/uploads/2011/06/hasta-bhattarai-3.mp3] Bhattarai conveys his expectations before coming to the U.S. and how he’s working to realize them in Chicago.

It hasnâ€™t been smooth sailing in the United States; thereâ€™s a new culture to navigate, and without advanced degrees from this country, Bhattarai works hard to pay the bills with his jobs at the Macaroni Grill at Oâ€™Hare airport and at the Bhutanese Community Association of Illinois. He and Chandra have a son, Arpan, who turned two on June 9, so thereâ€™s the added exhaustion of being new parents. But for Bhattarai, just the knowledge that he and his family and friends no longer face government-imposed ethnic discrimination makes the possibilities seem endless.

â€œHere my attitude is broader,â€ he says. â€œBecause if I try hard I can do anything here. But back in Nepal even if we were smart, smarter than anybody, we could not do anything because by the policy of the government we were not given any opportunities. We are a little bit hopeful now.â€

Bhattarai still sees education as the ticket to a stable and happy life. His desire to finish his schooling allowed him to remain in Bhutan a little longer, and then gave him a chance to escape the bitter monotony of the refugee camp in Nepal for a few years at a time. He hopes that in five or ten years he and Chandra will be able to attend university here. But for now, the chance to work at any job presents a welcome change from their stifling life of dead-end dependency in the refugee camp.

â€œBeing a human being, we are all born with limbs to work,â€ Bhattarai says. â€œRight now we are happy because we are living on our own, working, earning something. We always believe that we should work and live on our own rather than being dependent.â€

Bhutan has a different king now, the son of the one who kicked Bhattarai and his people out of the country 20 years ago. Though heâ€™s optimistic about life in Chicago, and excited for the future of his son Arpan, a U.S. citizen, Bhattarai hasnâ€™t let go of the possibility of going home, hoping that eventually politics there will become more democratic and his people will be allowed back in.

â€œThough it was not certain, our hopes, our dreams, we kept (them) alive all the time,â€ he says. â€œEven today, we are here, but expect to get back to Bhutan.â€

He spent 16 years in the refugee camp, not knowing if he would perish there, before being offered a chance to start over in the U.S. Heâ€™ll keep waiting for the chance to go home again.