Hrayer Dekris Nahabet pulls on his purple linen shirt, drawing attention to the word embroidered in white capital letters, VOLUNTEER. â€œAnyone wearing this is a volunteer,” the 64-year-old Iraqi native explains with pride. 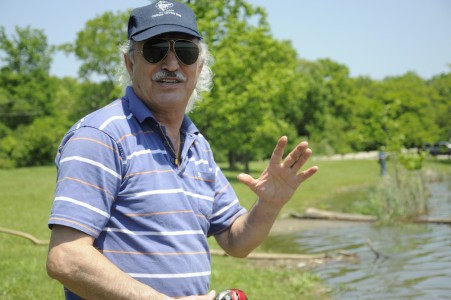 On Wednesdays and Thursdays between 10 a.m. and 2 p.m. Nahabet can be found volunteering in the transportation department of Advocate Lutheran General Hospital, not far away from where he lives in the Chicago suburb of Des Plaines. He pushes discharged patientsâ€™ wheelchairs from their hospital rooms to be greeted by their families outside. Although Nahabet only came to the United States 16 months ago, he considers his volunteer work an expression of his American patriotism.

â€œI have free time so I wanted to do something good for the country,â€ he says. Nahabet, who has been suffering from heart problems since 2001, collects disability payments from the U.S. government.

Nahabetâ€™s doctors have told him not to lift heavy loads of more than ten pounds or do long hours of physical labor. In May 2010, considering his doctorâ€™s advice, Nahabet decided to take tests to prove he was unable to work a full-time job. Four months later, Nahabet learned the Supplemental Security Income (SSI) office had lost his application.

In October, Nahabetâ€™s request was approved. He began collecting $449 and food stamps each month. This winter Nahabet realized he was eligible for $658 each month and SSI had been underpaying him. While they agreed to increase his disability payments and reimburse the difference for past months, his payments have decreased as his wife, Afela Jojagha, started working full-time and received a bonus after four months with her company. This month he received a letter informing him his payments had been decreased to $58. While Nahabet wishes he could earn a more comfortable living, Jojagha acknowledges â€œthe government is not giving you money to enjoy yourself. The government is giving you money as you need.â€

Unlike her husband, Jojagha works full-time as a server in Belmont Village, an assisted living facility for Alzheimer patients. A job developer from Catholic Charities looked for seamstress positions for her, but only found opportunities in boutiques and factories downtown. Jojagha preferred to work near her home, ultimately accepting her current position for its convenience. While she likes her coworkers and enjoys working with seniors, Jojagha calls her job the hardest part of life in America, and the hardest part of the job is finding names for all the items and foods she’s not yet familiar with.

Nahabetâ€™s disability payments and food stamps are on top of the money that all refugees receive from the federal government upon resettlement in the U.S. When Nahabet first arrived with Jojagha and their youngest son Avek in January 2010, they each received a welcome check of $900, which is standard for refugees. Raffi, their older son, received a check half that size of $450 when he arrived a month earlier in December 2009. The welcome allotment doubled at the start of 2010.

During the first six to eight months a refugee is in the country, the U.S. government gives them $200 of cash and $240 of food stamps each month until they find work. By August, eight months after arriving, Nahabet was the only member of his family still receiving the governmentâ€™s cash benefits and food stamps. In addition, Catholic Charities gave the family $1,200 to furnish their new apartment and paid their first monthâ€™s rent.

Nahabet considers his time pushing wheelchairs and waiting in the transportation department as opportunities to practice his English by making conversation.Â  As other volunteers and staffers enter the room, they greet Nahabet by patting his forearm, giving him a warm handshake or asking him how heâ€™s doing. â€œI have many friends here,â€ he repeats with a grin after each member of the transportation department wishes him a good morning. One female staffer turns down his handshake because her hands are dirty, joking â€œI just donâ€™t like you Hrayer.â€

Dekris, Nahabetâ€™s middle name, is a common Armenian name meaning the Tigris River. Itâ€™s a reminder of Nahabetâ€™s love for water and his most cherished hobby, fishing. He began fishing when he was four or five years old. The port city of Basra, Nahabetâ€™s hometown in southern Iraq, is just south of the junction of the historic Tigris and Euphrates rivers. Â He recalls standing with his father on the riverbanks as a young boy, tossing worms and corn bait into the river. Nahabet continued to fish as he got older, once even catching a shark. When Nahabet fled from Iraq, he brought his collection of fishing hooks.

Nahabet recalls watching his native city Basra become less hospitable for Christians since his childhood. No longer do they teach the Armenian language in the communityâ€™s schools or celebrate New Yearâ€™s in the youth club. While he worked for the government, his coworkers would speak to him about religion and the Q’uran. When Jojagha would go shopping in the market they would ask her why she was not wearing a veil or long skirt.

[AUDIO:https://immigrantconnect.medill.northwestern.edu/wp-content/uploads/2011/06/this-country-not-for-you.mp3] Nahabet recalls an incident that made him and Jojagha feel uncomfortable in their homeland.

In August 2001, shortly before then 16-year-old Raffiâ€™s class was to be drafted into the popular army for training, Nahabet decided to move his family from Iraq to Jordan. Although Nahabetâ€™s four-year military service was not painful, he did not want his young son to fight for a country in which their Armenian Christian family felt unwelcome.

â€œThe people would tell us this is not our country,â€ Jojagha says. â€œIf this is not our country, for what is he going to serve in the army?â€ Â They paid to have passports expedited, sold his furniture and crossed the border into Jordan, settling in with Nahabetâ€™s sister-in-law in Amman. Later that year, he suffered a heart attack.

While Nahabet considers neighboring Iraq and Jordan very similar countries, environmental differences distinguish life in Basra and Amman. He remembers seeing snow for the first time in his life on Armenian Christmas during his first year in Jordan. He watched his neighbors store up food and water, anticipating the cityâ€™s shut down in the snow. Jordanâ€™s arid location took a toll on Nahabet.

â€œThere is no river. Itâ€™s all mountain, mountain, mountain,â€ Nahabet says, explaining why he could not enjoy his lifelong pastime, fishing, in Jordan.Â  He visited the Jordan River and the Dead Sea, but missed living close to a source of water.

When they filed for refugee status, Nahabet and his family cited religious persecution as their reason for fleeing Iraq. Fearing spies among U.N. officials, Nahabet knew he could never return to Iraq after explaining why heâ€™d left. Nahabet never imagined he would spend over eight years living in Jordan. In 2002, frustrated with life in Jordan, he attempted to enter Europe illegally. He paid $3,000 to a man who accompanied him to Dubai en route to Europe. Nahabet didnâ€™t see the man for five days after arriving in Dubai. Realizing the man stole his money and abandoned him, Nahabet returned to Jordan empty handed, resolving never to try migrating illegally again.

Later that year, he suffered the heart attack. When he was first hospitalized, he had to pay out of his pocket for his treatment, as he had no form of medical insurance during his illegal stay in Jordan. In 2003, Nahabet underwent open heart surgery, which was paid for by an Italian organization called Caritas. They also covered the costs of much of his medicine. After his surgery, he became conscious of not eating fatty foods and walking every day. Nahabetâ€™s volunteer position appealed to him because heâ€™s guaranteed to spend eight hours a week on his feet walking and getting necessary exercise for his heart condition. Before he volunteered at the hospital, Chicagoâ€™s long, cold winters made him less likely to walk than when he lived in Jordan.

Although life was comfortable in Jordan, Nahabet says, for Iraqi refugees, it is only a bridge to a future in Europe or North America. The process of becoming a legal worker in Jordan costs several thousands of dinars. Each day spent illegally in Jordan, a refugee owes the Jordanian government one and a half dinars, he says. After the familyâ€™s six month temporary visas expired, they decided not to leave Jordan until the U.N. would take them out and pay the Jordanian government their visa overstay fine.

Iraqi refugees in Jordan cannot legally work so many earn low wages within private homes. Raffi and Avek worked as goldsmiths inside a family friendâ€™s home. Jojagha, who had worked as a seamstress since she was 20 years old, cross-stitched Christian-themed wall hangings, placemats and pillow covers inside her home. Nahabet would help her by cutting zigzagged fabric and assembling tassel embellishments.

The man she worked for paid her about two dollars for each piece he sold for $50 in the U.S. â€œHeâ€™s not paying enough but for me it was so comfortable because Iâ€™m working in my home and I donâ€™t have to go outside,â€ Jojagha says. When Nahabet and his family finally arrived in the U.S. in 2010, they each received a white card in the airport, legally authorizing them to work.

In addition to his white card, Nahabet stores another card in his wallet: his Illinois fishing license, which he excitedly shows two young coworkers in the transportation department. He counts four lakes within short driving distance of his home in Des Plaines. Last year he traveled with friends to the Mississippi River and spent an afternoon at Lake Michigan with Jojagha. Heâ€™s collected new fishing rods and recognizes the fish native to the Illinois area. This year, as he spends patient afternoons fishing at nearby Big Bend Lake, he easily converses in English with the other fisherman about the flooded waters.

[AUDIO:https://immigrantconnect.medill.northwestern.edu/wp-content/uploads/2011/06/US-is-a-dream.mp3] Nahabet speaks of his life in the U.S. as if in a dream.

While Jojagha still struggles with her job, Nahabet says there is no difficult part of life in the U.S. When she hears this, his wife gets irritated, suggesting thatâ€™s because he sits at home all day. In addition to volunteering at Advocate Lutheran General Hospital, Nahabet would love to volunteer as a translator with Catholic Charities if his English improves. He says heâ€™d love to help new immigrants from Arab countries adjust to the life in Chicago that heâ€™s grown to love. He still enjoys exploring the city, marveling at the buildings the movies could never fully capture.