Indra Rai describes herself as many things, including funny, friendly and cooperative. But she would never call herself a refugee, even though she has technically been one since she was six years old. 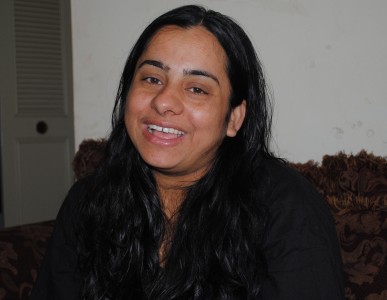 Indra Rai is a refugee from Bhutan (Photo by Katie Prentiss)

Rai spent 18 years in a refugee camp in Nepal after she was forced to leave Bhutan because she is Hindu. All the Hindu people were expelled from Bhutan because the nation was preserving itself as a Buddhist country.

Though Rai doesnâ€™t remember much about Bhutan, she does remember her mom crying during long walks leaving their country and entering Nepal as refugees.

â€œI donâ€™t know why I have allergy with the word refugee,â€ she says. â€œThe way they act to the refugees is really harsh in Nepal. Maybe thatâ€™s why Iâ€™m allergic to that word.â€

In Nepal, Rai was not allowed to have a job and earn income outside the camp. Her family received only nine pounds of rice to last for 15 days. Though there was an education system where Rai studied Nepali and English, there was only one book for all the children to share.

â€œYou canâ€™t imagine refugee life,â€ Rai says. â€œItâ€™s really hard. Do you know homeless? The standard is something like that.â€ 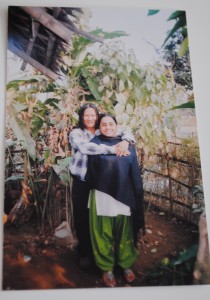 Rai and her husband in front of their hut in Nepal

Still, the camp allowed her to go to college, and Rai has a bachelorâ€™s degree in sociology. After college, she taught school inside the camp, and earned very little money.

Though Rai lists many reasons for being resettled in Chicago, including job options, she says the number one reason why she came was to have an identity. Having a green card, and the possibility of having U.S. citizenship is very important to Rai, who has never had any identification card.

Rai says having an official identity makes her feel part of American culture, something she consistently strives to do. It is part of ridding herself of the â€œrefugeeâ€ label she despises.

Click below to hear more about why Rai thinks identity is so important.

Before coming to the U.S., Rai was worried about what Americans would be like. In an orientation for refugees in Nepal being resettled in the U.S., she recalls being told that Americans were cheaters and unfriendly.

Click below to hear another reason why Rai was worried about coming to the U.S.

After Rai came to Chicago on May 26, 2009, sheÂ  found that Americans were much nicer than she had expected, which made it easy for her to adapt to American culture. She is trying to get her friends from Nepal to come here.

Now, Rai works at the Palmer House as a room attendant, though she is on maternity leave. She and her husband, Durga Rai, had their second daughter on April 20, 2011, only weeks before being interviewed for this story. 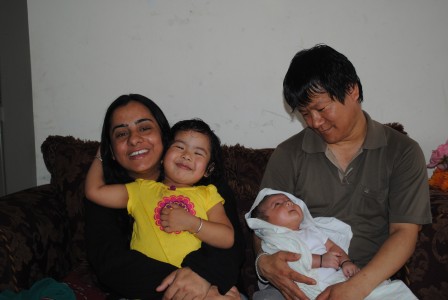 The Rai family in their apartment in Chicago

Click below to hear more about her experience having a baby in the U.S.

Rai says that getting used to a strict work schedule was one of the toughest parts to adapt to in the U.S. She says the most distinctive trait about Americans is their busyness. In Nepal, she could take 30-minute breaks, but at her job here, it is not allowed.

Click below to hear Rai’s take on the Nepali work ethic.

One of Raiâ€™s ways to understand this new culture is to compare it to Nepali culture with a sense of humor. At home in Nepal, Rai was the funny one.

â€œSometimes I make fun of people and my friends laugh a lot,â€ she says. â€œItâ€™s my bad habit though. I make them laugh all the time.â€

Going through a photo book from Nepal, Rai was noticing different pictures and laughing as she recalled the stories. 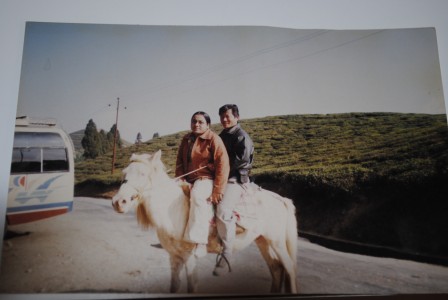 Rai and her husband riding a horse in Nepal

Click below to hear her story behind this picture.

Rai now uses her sense of humor to adapt to life in Chicago. The first time she went shopping at the grocery store, Rai tried to bargain prices for food. She quickly learned that the prices are fixed. She now looks back on that story and laughs.

Rai embraces winter, which she had never experienced before coming to Chicago. With her amazement of snow also came a few mishaps. She and her daughter played in the first snow of the year and the next day they woke up with fevers.

Click below to hear about the one thing Rai dislikes about winter.

She does not view these instances as problems, however. To Rai, they are all about learning how to fit into American culture.

Rai and her family also find ways to link their new and old cultures. Searching on YouTube for American and Nepali videos, they find an American woman who is studying to get her PhD. in Nepali music. They dance and sing along to her music, excited to find a bridge between their two worlds. 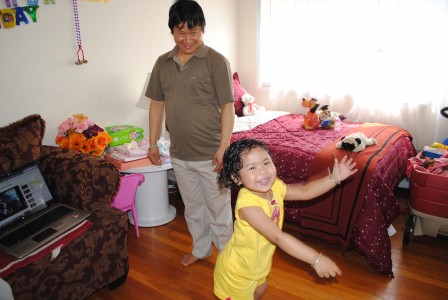 Though Rai and her family have found joy and laughter in their life in Chicago, not everything has been easy. Rai is often scared to take public transportation and cannot get used to people begging for money.

In Nepal, it was custom to say hello to everyone on the street, even if Rai did not know the person. In the U.S., Rai has a hard time not following this custom, even though she knows it is not common here.

Still, Rai is on the path to fulfilling her wish to shed her title of â€œrefugee.â€ She has made friends in the U.S., and she will be applying for citizenship as soon as she can. Everyday she learns more about the culture and learns that previous notions about the U.S. may not be true.

â€œI think I adapt quickly because with the talk and the real, itâ€™s different because they say that Americans are such and such, and I donâ€™t find like that,â€ she says. 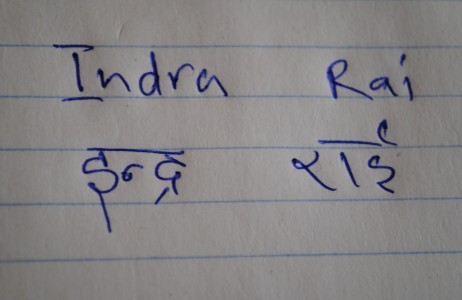 Rai writes her name in English and Nepali