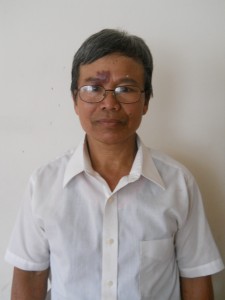 From Sunday to Thursday of each week, Phe Tu Lun washes dishes in the Northwestern University Norris Student Center. Every few hoursÂ he brings trays out to the salad bar and observes the hustle and bustle. He canâ€™t help but feel proud.

One day, his own children may participate in the same day to day dealings of college student life. Washing dishes may be tedious work, but compared to the 18 years he spent with his family in a refugee camp, in a constant state of fear and uncertainty, washing dishes is a highly desired respite.

Phe Tu Lun and his family came to the United States two years ago through Catholic Charities. He and his wife, Mayry Shey, brought their six children in hopes of securing a better future. They live in a 4-bedroom apartment near the Howard L stop in Chicago. Everyday struggles for the family include making the rent and overcoming language barriers. Their struggles in Burma were much more complicated.

Burma has experienced political unrest since the 1962 coup by General Ne Win that overthrew the civilian government of U Nu. Since then, the country has experienced years of ethnic tensions, protests, and guerrilla warfare.

Lun and his wife fled almost empty-handed, with only some clothes and pork to cook. They cared most about survival.

â€œWhen we first came to the camp we had no hopes of returning to our homes or going to the United States. Our first priority was just to escape from attacks by the Burmese troops,” says Lun.

[audio:https://immigrantconnect.medill.northwestern.edu/wp-content/uploads/2011/06/PheTuLun2.mp3] Phe Tu Lun relates in Burmese that what mattered was escape, safety and survival]

Late one night, troops attacked the camp. During the attack, the troops exchanged gunfire with a protesting guerrilla group. Lun and Shey, then seven months pregnant, were forced to run to another camp near the Thailand border. Â During their escape, Shey tripped and fell, resulting in a miscarriage. 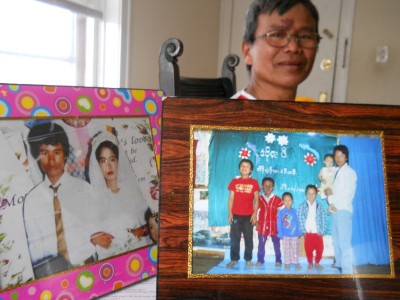 Phe Tu Lun, his wife, and six children resettled in the United States in 2009. (Photo by Alexandra Sifferlin)

They have never forgotten it. Once Lun and his wife had children, they dedicated themselves to being protective parents, which meant providing safetyÂ and education for their children. All six kids were born in the camp.

“My kids and their education is my major goal in life. That was the only reason we made the decision to come here to the United States,” Lun says. “It was difficult to raise children in the camp because we were not supposed to leave. It is very difficult to make money.”

[audio:https://immigrantconnect.medill.northwestern.edu/wp-content/uploads/2011/06/PheTuLun3.mp3] What matters now, as Lun relates in Burmese, is his children’s education]

Shey agrees. â€œBecause our children grew up in the refugee camps, they are disconnected from their family there. I think they will settle here. There are more opportunities for them,â€ says Shey.

Although there were education opportunities for the kids in the camp, most of the resources and school supplies were outdated. Lun knew his children were not getting the education he wanted. In 2008, he began the process of applying for resettlement through Catholic Charities and in 2009, after 18 years of refugee camp life, they were taken to Bangkok and then flown to Chicago. It was the first time anyone in the Lun family had seen or ridden either a train and airplane.

“It was my dream to see my children attend school. There are so many more opportunities for them here,” Lun says. “I see students at Northwestern using their computers and talking for hours. There are so many activities for them to participate in. They are doing sports, dancing. They can participate in the betterment of their school. They can be involved and offer ideas. There are student elections and the kids can choose who leads them. In Burma, the decision-makers are the leaders and you do what they say.”

Since being in the U.S., Lun ‘s major challenges stem from not understanding English and American culture. “As a father I want to play a role in supporting my family, but the language can be a huge difficulty,â€ he recognizes. At work, Lun’s supervisors have to use alternative ways to communicate with him, usually using hand signals and gestures.

Regardless of the daily efforts at understanding, Lun is satisfied. “Burma is still under war and there is violence occurring in all areas. In Burma we were always threatened. But there is no more fear here. Now, my only concern is the rent,” Lun says with a smile.

“I know I am providing a better future for my family and that makes me proud,â€ he says. By resettling in the United States, Phe Tu Lun has the opportunity to be the father he always wanted to be.