Walking through a treacherous Chicago winter can be brutal for a native Chicagoan, but it was even worse for newcomer Ibrahim. After entering the United States from the Hagadera Refugee Camps in Kenya in December of 2010, it was straight to work he went. Ibrahim made ends meet through the record breaking storms of 2011, taking four buses with 20 to 30 minute waits for a total of 3 Â½ hours in transit time for his late night shift at a matting package company.

â€œItâ€™s not what I was expecting,” Ibrahim says. “Life is tough, everything you have to work [for].” But indeed this has been the American reality for the Somali refugee. ï»¿ï»¿ 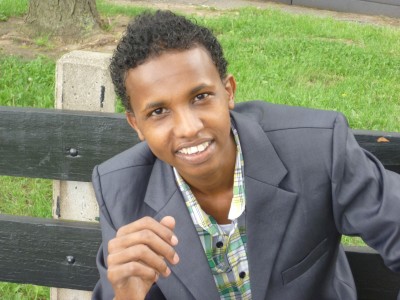 It is said that the American dream can be achieved with hard work and dedication. While Ibrahim initially arrived in Chicago to continue his education, he was met with words of advice that he had to work first in order to do anything. After attempting to balance work and his GED program at Truman Community College, Ibrahim quit school.

â€œI used to work in the night time. So I would come in the morning at 6. I had to prepare my breakfast, sleep awhile, and then go to school,â€ he says. He had little support system: no family, no friends, just sponsors, Catholic Charities. It became unmanageable. While immensely grateful for the support, he misses what’s most crucial to him: his family.

He anxiously awaits the arrival of his family members; his father and six siblings. His mother died in 1999. In early May 2011, he agonized over the delay of their arrival.

â€œI am now waiting five months. They told me they were coming after one month but Iâ€™m still waiting.â€

One month later, he finally celebrates the arrival of some of his family members – his sister and her children.

His faith has now been restored. 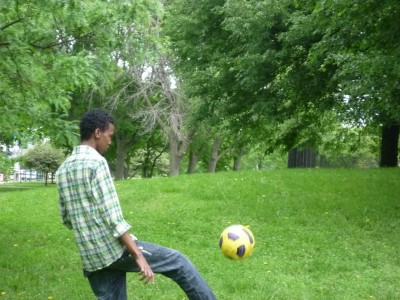 Now six months into his arrival to Chicago, Ibrahim has taken matters into his own hands. He pays his own rent and lives with elderly Somali roommates.

â€œSome of them could be my father,â€ he states. After quitting his job, which he found tedious, he goes to school full time to get his GED and is looking for a part time job.Â  â€œI want to get my Bachelorâ€™s degreeâ€ he says. â€œThat is why I came here.â€

In 1992, Ibrahim and his entire family fled Somalia during the Civil War and ended up in Kenya. Then two years old, Ibrahim has known life only in Hagadera.

[audio:https://immigrantconnect.medill.northwestern.edu/wp-content/uploads/2011/06/life-is-tough.mp3] Ibrahim describes his years of living on limited rations.

He recalls the nongovernmental organizations (NGOs) providing people with medical treatment, food, and education. Some provided useful skills such as tailoring.

School was under the Kenyan system of education and taught in the Somali, Arabic or English languages. Teachers, of Somali or Kenyan descent, were high school graduates from the refugee camp education system. The information learned was simply circulated from previous teachings and old books.

â€œThey were not well trained. We only took what the teacher told us or what we read in books,â€ Ibrahim recalls. â€œThere was no practical [learning],â€ for subjects like chemistry and biology, which in the western education system, he says, are in tandem with experimentation and projects.

Ibrahim and other children went to school by foot. They were there from 6 a.m. to 6 p.m. â€œWe could only walk there. There were no buses or cars like here.â€ If you were late to class, he says, you were punished, â€œbeaten or suspended.â€ As children, completing their education was to be their only concern.

That promise – of finishing his education – has been on Ibrahimâ€™s mind since starting school in 1999. It is at the core of the American Dream. â€œIn America you have high quality and practical education,â€ Ibrahim asserts. After he completes his GED, he wants to pursue his bachelor’s and aspires to become a social worker and help those refugees like himself in need. â€œIf I am a social worker, I can maybe go to my country and help them,â€ he says.

The differences between Truman Community College and schooling in Kenya are immense. In his current program, he recognizes the oddities of having one instructor for all of his subjects instead of several different ones for every subject as they did back in the camps. This arrangement however is explained to him to be unique to the English as a Second Language program and not to all western education systems. And while computers are deemed an essential American school supply, Ibrahim basks in the ease of access to computers and the internet. â€œWe did not have computers in school.â€ 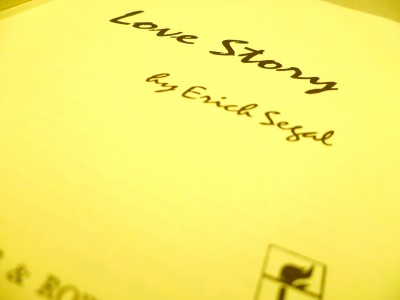 Not only that, after having never been in co-ed classrooms before, Ibrahim chuckles at his love for the unfamiliar arrangement. â€œI like it with boys and girls. Itâ€™s much more interesting.â€

On the coffee table in Ibrahimâ€™s West Rogers Park apartment lie three or four books. â€œMy favorite subject is biologyÂ and English.â€ His love of English is evident. He is in the midst of reading â€œA Love Storyâ€ by Erich Segal.

â€œI like novels. Love stories,â€ he beams. The story of Farah Ibrahim and his new American lifestyle however is still a work in progress.