Se See Lia: Finding a way through oppression and debt 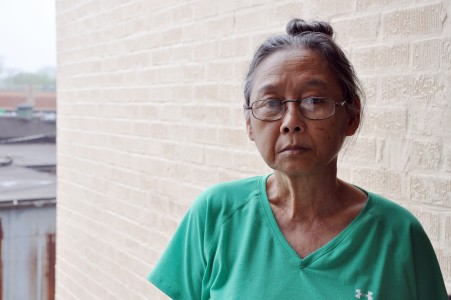 Lia outside her apartment in Chicago. (Photo by Katie Chen)

Se See Lia is finding a way. She always has. She worries about the hospital bills that have piled up since shortly after she came to the United States three years ago. She worries for the people she left behind in Welley village in Burma and in the Thai refugee camp she fled to when Burmese soldiers struck.

Lia, who is ethnically Karen, grew up in Burma, near the countryâ€™s largest city, Rangoon. Upon graduating from bible school, she became a teacher and moved to Welley, a Karen village near the border of Thailand and Burma. At that time, the border villages had no schools. What they had was civil war, with the Burmese on one side and the Karen people led by the Karen National Union (KNU) on the other.

Burmese soldiers would recruit villagers to join them in their assaults on other villages, Lia explains. The Karen villagers were used to tote heavy backpacks filled with provisions through the jungle.

[audio:https://immigrantconnect.medill.northwestern.edu/wp-content/uploads/2011/06/volunteerswload.mp3] Lia recalls how hard it was for the villagers

They were also deployed in the front lines during the fighting. If they returned to the village or ran away, they would be pursued and killed.

â€œThey cannot go because of little food,â€ Lia says. â€œThey tired and some of the villagers killed because of the heavy weight.â€ 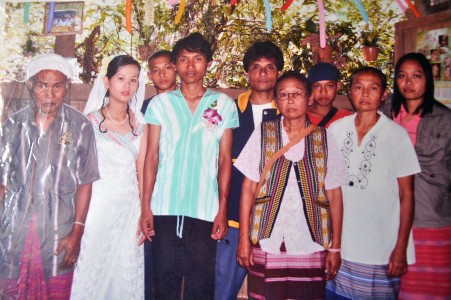 Lia would attend village meetings to devise plans to resist and fight back.

â€œWhen we have meeting, like a Karen meeting, if the government didnâ€™t allow, we cannot do nothing,â€ she says.

Many who strongly advocated democracy, like Aung San Suu Kyi, a famous Burmese opposition politician who received the Nobel Peace Prize in 1991, were put in prison. Lia admires Suu Kyiâ€™s courage, and says she tolerated the oppression until she could she could no longer do it.

â€œWe have two children,â€ Lia recalls, â€œbut then there were soldiers and bombs and fires, so we went to refugee camp in Thailand in 1989.â€

Thailandâ€™s refugee camp is not much better

There was no civil war in Thailand, but oppressive restrictions persisted. The family lived in a tiny bamboo hut with a roof of thatched leaves. Provisions of rice, oil, salt, and on occasion, yellow beans were rationed. They would have meat or curry when they could afford it from the camp market. There was no running water. Thai soldiers created a lake that would serve as the refugeesâ€™ main source of water.Â Use was closely regulated.

â€œWeâ€™re limited to get water by the hour,â€ Lia recounts. â€œMaybe one hour in the morning or maybe at night can you open to get water.Â  If you open every time, maybe not enough for refugees.â€

[audio:https://immigrantconnect.medill.northwestern.edu/wp-content/uploads/2011/06/control-montage.mp3] Lia recounts a number of the indignities the Karen refugees faced in the Thai camp

Lia and her husband, Roger Poe Nyunt, both taught in the campâ€™s schools. They had cash that other refugees didnâ€™t. That allowed them to buy exit permits from the Thai soldiers that made it possible for them to go into Mae Sot, a town near the camp, to shop or work or attend church meetings. The longer they stayed in the camp, Lia recalls, the higher the permit fees got. Those who left the camp without a permit would be jailed for up to a day.

Eventually, in 2006, UNHCR started accepting applications from the refugees to come the United States. After two rounds of interviews, Lia received news that she and her family were allowed to go to America as refugees. After 19 years of refugee camp life, they arrived on June 11, 2008. 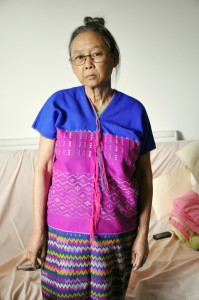 Lia in traditional Karen dress that she bought from a seamstress before she left for America. (Photo by author)

The land of freedom

Lia cherishes those first four months in Chicago. The family had support from Catholic Charities. Her son and daughter got jobs. Lia and her husband both found work through a job counselor.

Three months into her job, though, she stopped working because of a kidney stone.

Her hospital bill for three nights in patient care came to $10,000. After her children made some calls to cut through the paperwork and try to understand a confusing system, the cost was split into two bills: one for $642 and the other for $800.Â Though 1/7 of the cost Lia thought she needed to pay, the family was still in debt.Lia has tried to work through the many phone calls from the hospital asking seeking payment, but she isnâ€™t sure about the process.

[audio:https://immigrantconnect.medill.northwestern.edu/wp-content/uploads/2011/06/Lia-debts.mp3] Lia explains how exasperating those calls are

She has no job. Her husbandâ€™s work is part time at North Shore Baptist Church in Chicagoâ€™s Edgewater community, where he takes care of the Karen congregation and the church supports his family with $1,000 a month. Her daughter just had a premature baby, so both she and her baby had to stay in the hospital for three weeks. Lia has to negotiate those costs too.

Lia sees a way through it. She always has.

â€œIâ€™m free to come and go to every state,â€ she says. â€œWhen in camp, just live in the camp. Some lady told me, â€˜have you been to Bangkok?â€™ I just heard about Bangkok, but never been because no paper to go. But now, free to travel, free to visit.â€

And for Lia and her family, freedom is their way out.