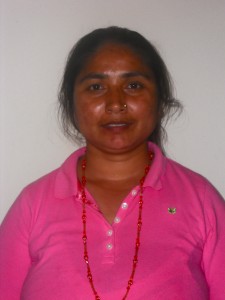 When Yashoda Dulal begins to speak about her time in a Nepalese refugee campâ€”a place where she spent more than half of her lifeâ€”the stories that excite her are those of a mother preserving tradition. When asked about the most challenging part of living in a refugee camp, she points to her children. She remembers the poor health care services and worrying about her children getting sick. How to keep her family alive and healthy through the harsh conditions in Nepal? Most of all, though, how to maintain for them an appreciation of who they are?

Dulal and her family practice the Hindu faith. As a refugee who has just marked her first year living in the United States, her sense of home lies in the cultural traditions she’s kept alive through the first twelve years spent in Bhutan, the next nineteen in Nepal and this past year in Chicago. With the help of a translator, she talks about her favorite cultural traditions, the holidays of Dasara and Diwali.

Dulal doesnâ€™t remember much of her time in Bhutan, and describes her faith, her cultural traditions and celebrations as Nepalese in origin. She now thinks of Chicago as home, where she has â€œnice food, a good house and freedom,â€ and teaches herself English through borrowed library books on those days when a volunteer who teachers her the language of her new country isnâ€™t around. Despite how much she has embraced her new culture, however, she hopes that she will be able to pass down the traditions of Dasara and Diwali to her childrenâ€”that they will stay connected.

â€œThis past year, we couldnâ€™t celebrate Diwali or Dasara because we didnâ€™t know where to go to get what we needed for the celebration,â€ Dulal says. â€œIn the camps, though, it was difficult too. We had to exit the campâ€”the borders were openâ€”in order to get the things that we needed.â€

The idea of not celebrating in the camps, though, was unheard of. â€œWe had to celebrate in the camps no matter how hard it was because the children looked forward to it,â€ she reminisces. â€œThe children would be sad or unhappy if we didnâ€™t celebrate, they would look to the tents and the huts around them and see other families celebrating and ask why they werenâ€™t.â€ The holidays are family based, celebrated together, sometimes with neighbors.

In the camps, the vegetables, meats, fruits and flowers necessary for the poojaâ€”or prayer serviceâ€”werenâ€™t easy to come by. To make sure they could afford the goods available on the outskirts of the camps, Dulal and her husband, Ananta, would save little by little the rupees they earned in the small jobs they did around the camp, and when the festivals came around, they would buy what they could.

Her children, Chandra and Geeta, love the traditions. â€œI get to clean the house and make Nepal food,â€ Chandra says excitedly when asked about how she likes to celebrate. â€œAnd thereâ€™s a dot, a big, red dot and you put it by your eyes!â€ she exclaims.

Sheâ€™s referring to the tikka – a red dot placed between the eyes, symbolizing the third eye – often associated with India and Hinduism. Although in 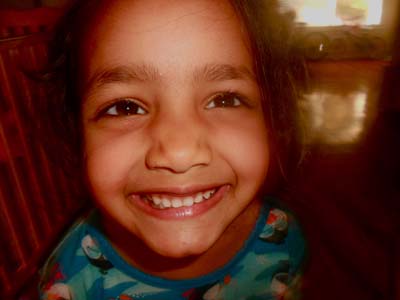 Chandra, beaming at the thought of the holidays. (Photo by Stephanie Novak)

India itâ€™s common to wear tikka daily, for the Dulals the mark has a special significance used only for religious ceremonies, helping them connect with the gods theyâ€™re worshipping. At Diwali, the Lakshmi pooja, or prayer celebrating the goddess of wealth, is Dulalâ€™s favorite and most solemn practice.

The three-day Diwali ceremony lasts longer in Chandraâ€™s mind, though, because the cooking and cleaning begins a full three days beforehand. The family will prepare their home the best they can. Cleaning was hard in the camps, Dulal recalls, because everything was dirty. Still, she endeavored to make her home as neat as possible, as a sign of respect for the gods she worshipped in the ceremony.

With open borders in the Nepalese camps, Dulal remembers leaving the camps with her neighbors in the days before the ceremonies to shop for everything, ranging from fruits and meats to new clothes for the family to flowers. â€œAny flowers will do, but marigolds are the best,â€ she says. â€œWhen we could get them, the celebration was more special.â€

â€œIn Nepal I would cook with my mom,â€ Chandra chimes in. â€œWe only have Nepal food there, itâ€™s not like Chicago.â€

â€œThereâ€™s no pizza!â€ her sister exclaims. Yes, Chandra agrees, no pizza, only Nepalese cuisine. â€œI like Nepal food! And cooking. To cook it, you take the rice, or maybe bread and you get it really, really hot and you cook it and it’s done! And then you eat it!â€

This is America. Dulal and Chandra will still cook â€œNepal foodâ€ on the stove in their Chicago apartment. This year she hopes to go to Target and explore Devon Avenue, the city’s mecca for Southeast Asian cuisine and culture, to find the right foods and symbols. Each day of Diwali is devoted to a god or a goddess, and photos and symbols of animals and goddesses for each day. The crow, the dog and the goddess Lakshmi were hard to bring from Nepal, so sheâ€™ll have to find them here. While she waits for the October ceremony to arrive, sheâ€™s busy reading her library books so that her English will improve enough that she can read the street signs and talk to salespeople. That way she can ensure that she’ll find the proper things to celebrate when Diwali and Dasara roll around again.